Hidden History of Detroit: Everything you need to know

To schedule an interview, request a review copy, inquire after my favorite cocktail recipe, send for images of my book, my face, or my dog, or for any other information you may require, just send me an email. 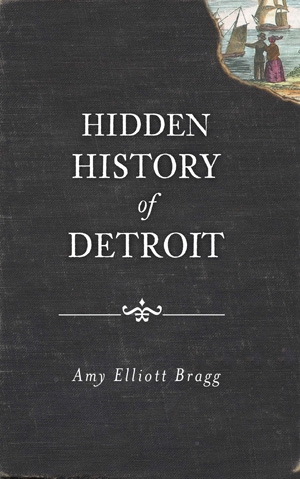 In Hidden History of Detroit, discover the Motor City — before the Motor: a muddy port town full of grog shops, horse races, haphazard cemeteries and enterprising bootstrappers from all over the world. In these funny, warm and surprisingly personal essays, you’ll meet the argumentative French fugitive who founded the city, the tobacco magnate who haunts his shuttered factory, the gambler prankster millionaire who built a monument to himself, and the historians who created the story of Detroit as we know it: one of the oldest, rowdiest and most enigmatic cities in the Midwest.

Where to buy it

*Buy it from me directly and I’ll knock $3 off the list price!* Grab that great deal right here.

Prefer a brick & mortar shop? I don’t blame you! Local retail rules! This list is not by any means complete, but it should get you started. It’s also a good idea to call ahead and make sure the book is in stock, especially if you plan to make a special trip.

If you see the book somewhere I haven’t listed below, would you be so kind as to drop me a line?

Pure Detroit
Locations at the Guardian Building, the Fisher Building, and the Renaissance Center
313-963-1440

Order directly from The History Press or from Arcadia Books

Order from an independent bookstore at IndieBound.com

Order for your Kindle

Amy is a writer and editor. She blogs about early Detroit history at nighttraintodetroit.com. Before returning home to metro Detroit in 2009, she lived in Milwaukee, where she was senior editor of the arts and culture magazine ThirdCoast Digest (formerly VITAL Source).

By day she’s the content director for Detroit-based Issue Media Group. By evening and weekend, she rambles around old cemeteries and works hard at old books. She has written about the history of the accordion for the Metro Times, has been invited more than once to nerd out about Detroit history on WDET’s The Craig Fahle Show, and occasionally/enthusiastically guides tours of historical interest for Atlas Obscura and at historic Elmwood Cemetery. She is board president of Preservation Detroit, a co-founder of Brick + Beam Detroit, and emeritus organizer of the Detroit Drunken Historical Society.

She lives in Ferndale with her husband and her dog. She is a graduate of Beloit College. Hidden History of Detroit is her first book. She likes cocktails.

What people are saying

“From Antoine Cadillac’s arrival on these pastoral shores, it would seem Detroit has always been facing calamities of one sort or another: conflagrations, invasions, epidemics, disorders and drunkenness. But Bragg renders this rocky history in graceful prose with a warm, first-person touch that lovingly lingers over some of its most unusual characters, those both immortalized in statuary and street names or simply forgotten over the ages.” — Michael Jackman, Metro Times

“I would say the glass of Canadian Club Classic 12 is optional, but really it’s not.” — Brian Mulloy, Michigan Essay

“Hidden History of Detroit contains many nice stories that are true and one picture of Lewis Cass that looks like Dennis when he forgets to cut his hair.” — Christina & Dennis Jacobs, Perfect Laughter

These corrections have been issued for the second printing, published in January 2012, so if you own an old copy of the book and raised an eyebrow at any of these facts, here you go:

In the chapter Rivals, a typographical error indicated that the battle of North Anna took place in 1854. This battle, being part of the Civil War, was fought in 1864.