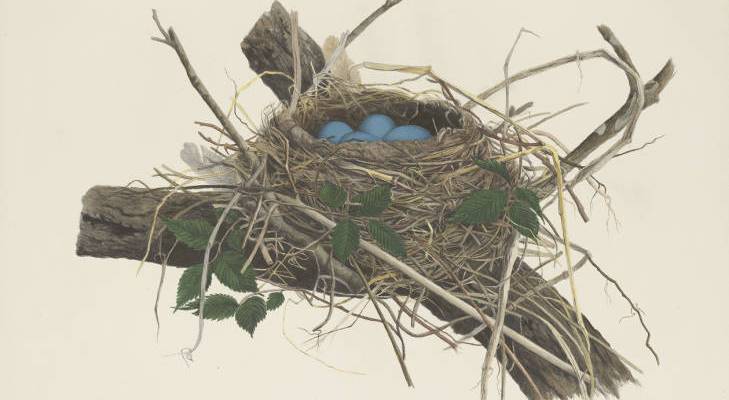 Why is the robin Michigan’s state bird? 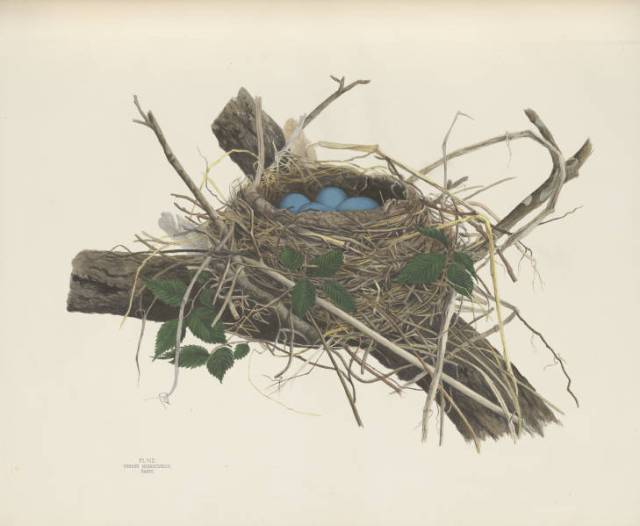 She had just finished up a huge project: a poll, open to all Michiganders — and in particular its school-aged children — to select the state’s official bird. A ballot listed some 20 options for Michigan’s avian avatar: the black-capped chickadee, the rose-breasted grosbeak, the cedar waxwing, and the downy woodpecker among them.

Edith was president of the Michigan Audubon Society, an office she had held since 1911. She was the first woman to hold the post, and she would keep it for over 20 years.

A big part of her job was traveling across the state, speaking to classrooms and church groups about birds. Edith said she would visit with anyone anywhere in Michigan who wanted to learn about Michigan’s birds, so long as the roads there were passable. Her travels intensified in the lead-up to the state bird vote, in an effort to educate people about the birds in the running. She came to Detroit to promote the contest on WJR.

People got excited about the state bird campaign. Governor Fred Green voted for the ruffed grouse. Henry Ford voted for the song sparrow, though when the telegram came with Ford’s vote, the messenger made a goofy joke about it: “Bad news,” he is said to have told Edith; “He selects as his choice the crow.” (This made me cackle but also, COME ON, the crow would make a FINE STATE BIRD!) A classroom of children at McKerrow School in Detroit, after learning more about all of the birds they could vote for, unanimously selected the kingbird, for its fighting spirit; of her selection, one student, Rita, added, “I like the kingbird because of the pretty crown.”

Nearly 200,000 votes were cast for the state bird, and they all arrived by mail or telegraph to Edith Munger’s house in Hart, displacing her husband Dr. Louis Munger from his study. (When the last load of mail came in, the Detroit Free Press reported that he “dumped a bag of mail on the floor of what used to be his sacred sanctum and remarked that it was his pleasure to announce that he was going out to treat somebody for smallpox or something like that.”)

Votes were hand-tallied by Audubon Society volunteers. Here’s a picture! 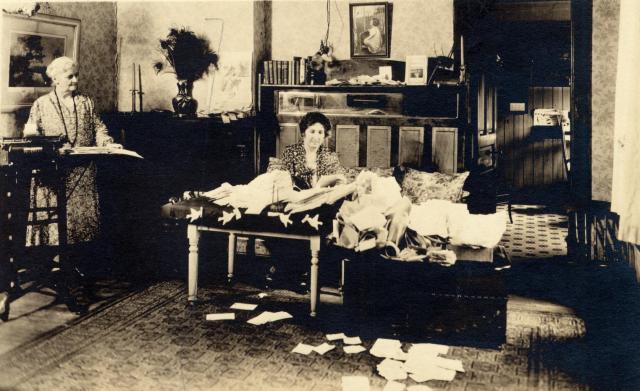 When they had finished counting, the robin had won with 45,541 votes, 22 percent of the voting share. In second place, the black-capped chickadee took 37,155, 18 percent of the people’s favor. The bluebird was a distant third.

Edith was a little disappointed! Despite her valiant attempts to inspire enthusiasm for birds among the people of Michigan, it seemed like they just picked the bird most familiar to them — one with no special significance to Michigan, or to the residents who had voted for it. 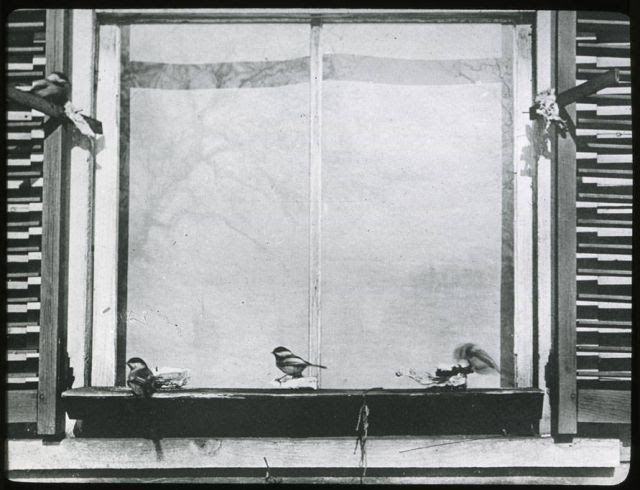 Chickadees at a window bird-feeder. Source.

“Most of the ballots sent in for the robin were not accompanied by any expressions on the part of the senders, but with the chickadee it was different. … certainly many of the birds near the bottom of the voting list had their virtues fully set forth by those who had chosen them as their selection,” Edith told Detroit Free Press reporter Alonzo Parsons in June 1929.

She also told him that she was considering holding a vote again — but only after spending another YEAR teaching Michiganders even more about the birds among us.

“I have been more and more convinced that the result would have been different if those who voted — particularly the children — had had the benefit of nature study as it pertains to birds,” she said. “Much as the robin is loved by many, I feel that after a course of nature study those who might vote again would so change their vote that the robin would not be returned the winner, but that rather this honor would go to a bird more closely allied with the outdoor life of our state.”

The recount, so far as I can tell, was never launched. In April 1931, a concurrent resolution to make the state bird official was introduced in the state House by conservation committee chairman Conrad J. Netting of Detroit. It passed late at night on May 22, 1931 — 88 years ago this week — along with the state’s annual budget, and without ceremony. WITH NARY A PEEP, if you will. Or, as it was announced in the Lansing State Journal: 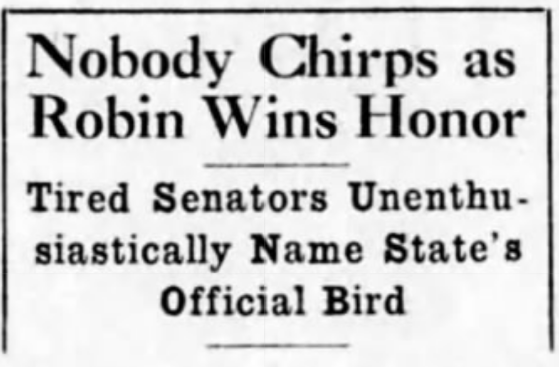 This dissatisfaction with our state bird — even on the part of the woman who personally organized the state’s state bird campaign! immediately after the campaign concluded! — has persisted, and an effort to revisit the decision bubbles up every now and again.

A House resolution in 1976 proposed to replace the robin with the Kirtland’s warbler — a songbird with a narrow range that breeds in Northern Michigan’s jack pine forests, nearly went extinct, and is a keynote conservation triumph for our state. (You may have heard the Radiolab episode about Kirtland’s warbler conservation efforts, which includes a persuasive argument for the warbler’s state bird-hood.) In 1992, Rep. Stephen Dresch (R-Hancock) submitted a resolution to name the black-capped chickadee the new state bird. (Chickadee talking point: The bird is a year-round resident, as opposed to the robin, who only lives here when it’s nice, AND CAN YOU BLAME HER.) The question most recently made its way around the state Capitol in 2005.

No one asked me, and maybe it’s just spring feelings, I feel a little tenderness for our state bird, in all its shoulder-shrugginess. (For whatever it’s worth, the other two states who claim the robin as their official, Wisconsin and Connecticut, also arrived at that choice via popular votes.) 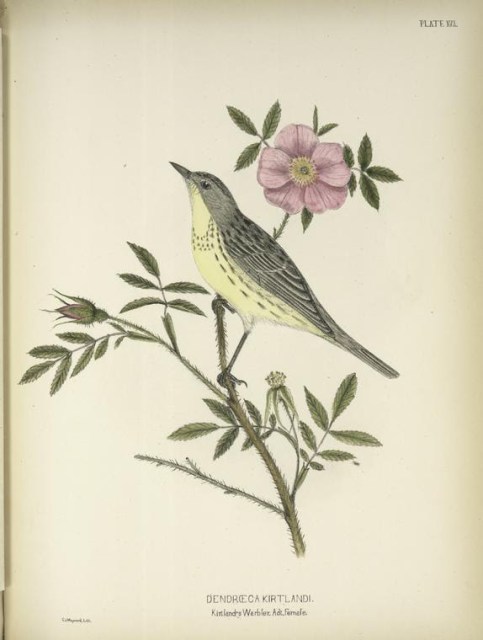 How many of us will see a Kirtland’s warbler? You have to be pretty intentional to make that happen, unless you are a gnome who lives in a jack-pine forest. The 1929 list of contenders included the meadowlark, the bob-o-link and the whip-poor-will, three birds I’ve heard of, but had no mental picture of, and had to Google. (Do you know that the whip-poor-will looks like a little grumpy frog? True fact!)

But every spring, no matter where you live, a robin moves into your neighborhood. Maybe you will watch it raise its young in your bushes or in your hanging plants, or maybe you will find a fledgling hiding in your weedy driveway border, as I did last weekend. Maybe a sky-blue egg will fall from its nest and be scooped up from the lawn, placed in a lovingly made little nest, swaddled in an old bath towel, and lit by a desk lamp, by a kid who is wild with wonder and hope.

(The chickadee is a pretty good choice though.)