Temples of memory: The rise of the weird and wonderful public mausoleum

I had such a “YES, THIS!” moment when I first saw John Faier’s photographs of Chicago’s Queen of Heaven mausoleum, and read about his obsession with the place, and places like it.

“Bright colors, matching upholstery, matching lamp shades — the architecture reminds us more of a cocktail lounge or hotel, not of a mausoleum,” Faier said in an interview with Wired. His photographs captured something essential about what it’s like to visit a mausoleum — the beauty and the kitsch, the rich-grandma’s-parlor vibe of it all, but also the sense that you are trespassing, so rarely is anyone else in the building with you. They’re eerily quiet. They smell weird. I spend a ton of time in cemeteries, but I only get spooked in mausoleums. Sometimes they make me think: I am too alive to be here.

And yet they are so lively, such a vivid reflection of a specific moment in time. The people who built these places were not trying to blend into eternity. They were interested in now. Sure, there are columns and stained glass and saints. There are also wood-paneled hallways, sherbet-pink armchairs, minimalist brass chandeliers. The classical elements are stripped down to form, the saints are cartoonish, the stained glass is technicolor. There is always carpeting! Halicarnassus, this is not. 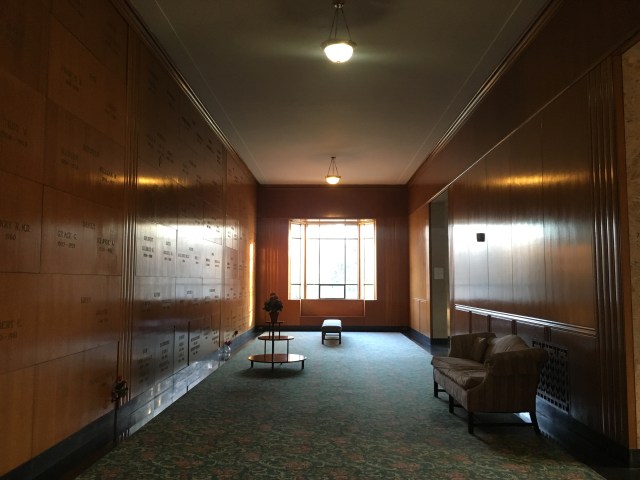 Before we built these hip airport lounges to the afterlife, our architects sailed to Europe and studied the ancient tombs, temples and monuments. Louis Kamper took such a jaunt before he designed one of the Detroit area’s earliest public mausoleums in a classical, churchy style at Roseland Park Cemetery, off Woodward Avenue in Berkley. This has to be one of the most-beautiful, least-visited spaces in the tri-county. Kamper himself is interred here. 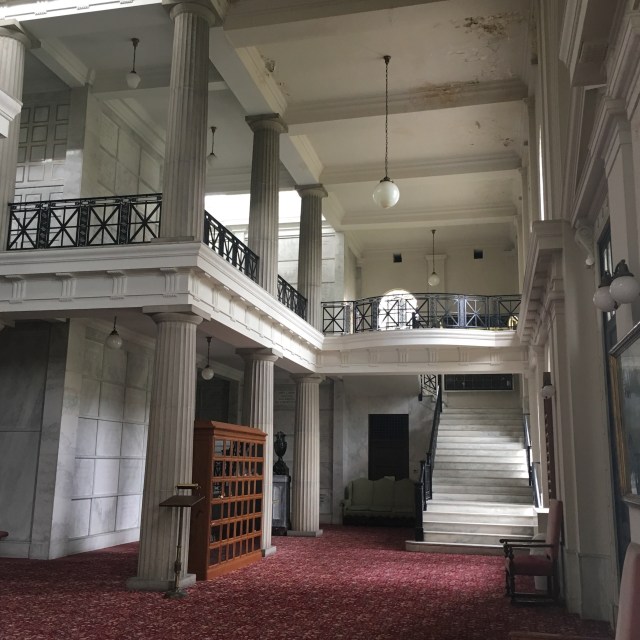 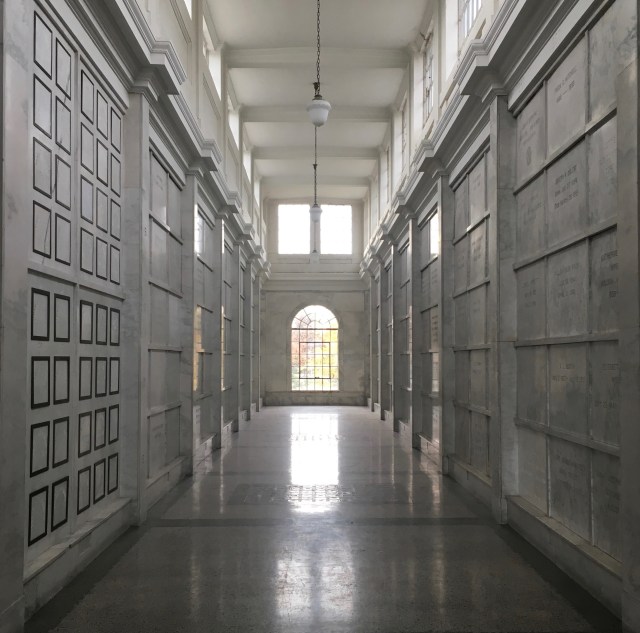 It was also the largest public mausoleum in the country when it opened in 1914. It was such a curiosity that hundreds of people thronged to Roseland Park’s dedication — where “several persons, unable to gain admission otherwise, seized ladders found near the building and climbed through rear windows,” the Free Press reported. The first patent for a “sanitary crypt, or community mausoleum” in the U.S. had been issued only a few years earlier, in 1907, and Kamper’s commission from Roseland Park came in 1909.

(We’re talking here about large, above-ground structures where many people, not all related to one another, are interred indoors, in individual crypts, as opposed to the smaller family mausoleums which were common here by the late 19th century. Private mausoleum burial tended to be very expensive and exclusive; community mausoleum made above-ground burial — and the sense of status that came with it — available at about the same price as in-ground burial.)

Fifteen years after Roseland Park, we welcomed another local landmark in the public mausoleum movement: the Temple of Memories at White Chapel in Troy, for which the cornerstone was laid in 1929. 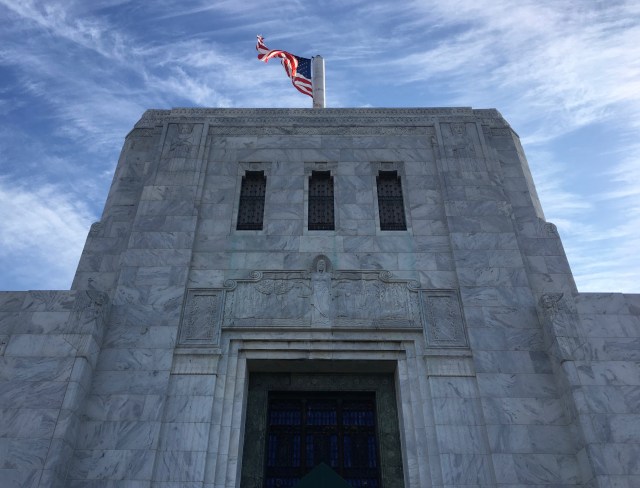 White Chapel’s Temple of Memories, designed by Harley & Bell in 1929. The relief over the door of Mother Earth is by sculptor Hester Bremer. 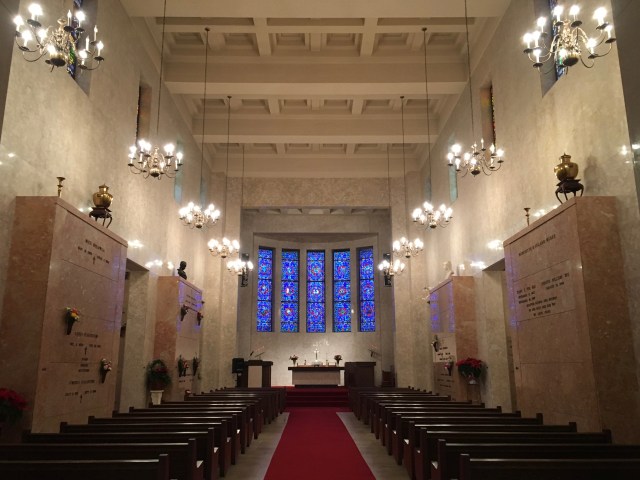 The chapel inside of the Temple of Memories. 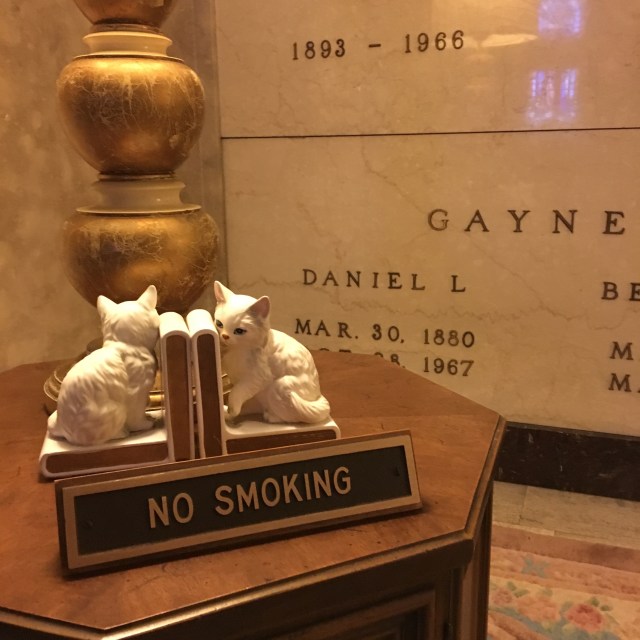 A weird corner of the mausoleum, lest you think it’s all grand gestures.

The mausoleum at White Chapel — a little classical, a little deco, monumental to the max — is the work of architect Alvin Harley, founder of the firm that is now Harley Ellis Devereaux. According to a history on White Chapel’s website, cemetery founder Clarence Sanger — who brought California’s “memorial park” ideas about cemetery design to the Midwest — liked Harley’s initial sketches for the mausoleum.

“But,” he said, “I want the finished project to cost twice as much. White Chapel must be the ultimate.”

Harley had not set out to become a mausoleum architect. But the White Chapel commission was a big break for Harley, one that happened to coincide with the Depression. Community mausoleum commissions helped keep the lights on, according to a 100-year history published by HED. And as community mausoleum burial became more popular, especially after the war, Harley’s nephew Frank took off on a pro-bono road trip to rustle up cemetery business across the country. The sales pitch worked: Harley and his firm became the nation’s go-to mausoleum builders.

Harley evolved his style over the next several decades, from the classicism of the Temple of Memories to more boldly modern designs. His portfolio includes the mausoleum at Resurrection Cemetery in Justice, Illinois. Completed in 1969, it features the largest work of stained glass in the world. 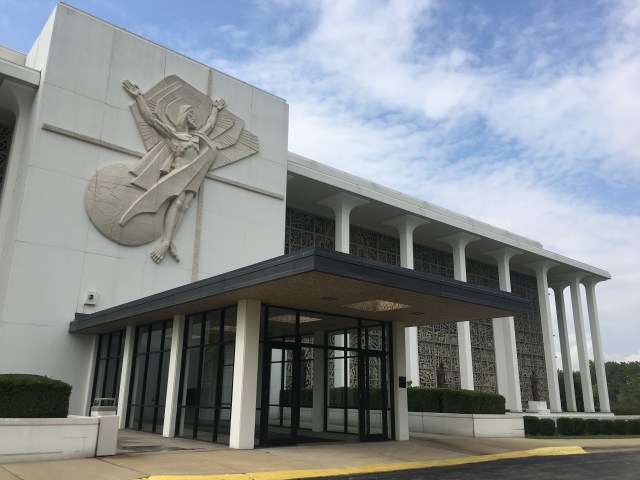 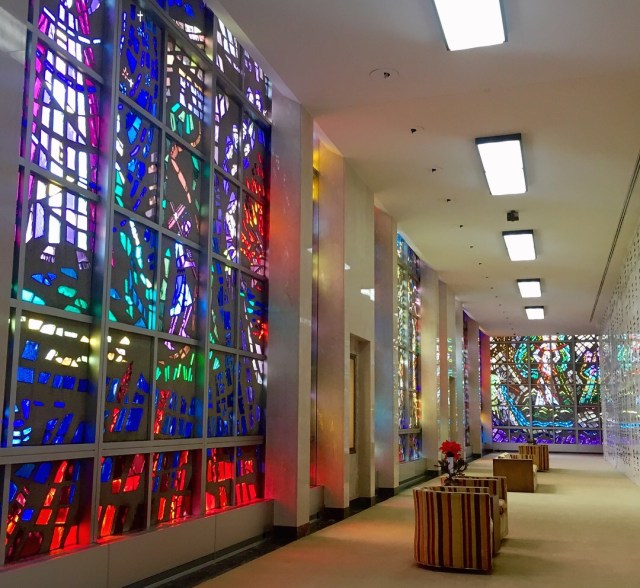 One small slice of the world’s largest stained glass installation, which is two stories tall.

In 1958, Harley celebrated the 50th anniversary of his architecture firm. The Free Press interviewed and photographed him to mark the occasion. (He looked great! The reporter even called him “handsome.”)

“Harley doesn’t call [his] style ‘modern.’ They’re ‘in step with the spirit of the times.’

‘We’re in the throes of tremendous change,’ he says. ‘It takes centuries to develop a style such as Romanesque or Gothic, and a lot of poor stuff is produced before it becomes a good period of architecture. Today’s ‘modern’ may look as old as Methuselah in 10 years. It’s the use of new materials that influences our thinking today.'”

What was he working on at the time of that interview? Well, he had just completed a pretty big job — the new Queen of Heaven mausoleum in Chicago. It’s the largest Catholic mausoleum in the world, by some accounts, with room for 30,000 interments. (Still 9,000 or so left, in case you want in.) Done up in a French Gothic style, it looks pretty “historical” from the outside, a flirt with eternity. Inside? I haven’t been there (yet), but from what I see in Faier’s photographs, it’s Harley all the way. Rich, expressive stained glass. Fabulous sofas. Wood paneling! In fact, it’s a Detroit original: the wacky, warm-hearted mid-century community mausoleum.

Alvin Harley lived to be 92 (besides mausoleums, he also designed some of Detroit’s modernist gems, including the Coleman A. Young Municipal Center and the Veterans Memorial Building, as well as the Horace Rackham Education Memorial Building and the CPA Building in Corktown). When he died in 1976, he was buried in the Temple of Memories.

I often think of this as the “architect’s mausoleum,” even though there are only two of them there (that I know of) — Mr. Harley, of course, at rest in his masterpiece. And then there’s also Albert Kahn. 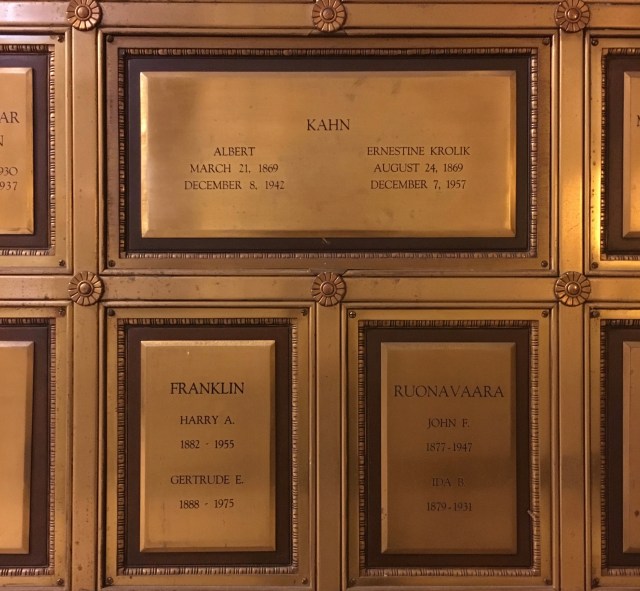 Harley apprenticed under Kahn in 1903, when he was 19 years old, and called the years he spent working with Kahn “my most inspirational.” (He also said of Kahn: “Though some considered him a genius, I think he was more or less a common sense man. He knew how to put up a quality building, and had the smarts to capitalize on the construction hysteria of the 20s.” I respect the pragmatism!)

That Kahn chose Harley’s Temple of Memories to spend his eternity seems to me like an endorsement of a job well done.