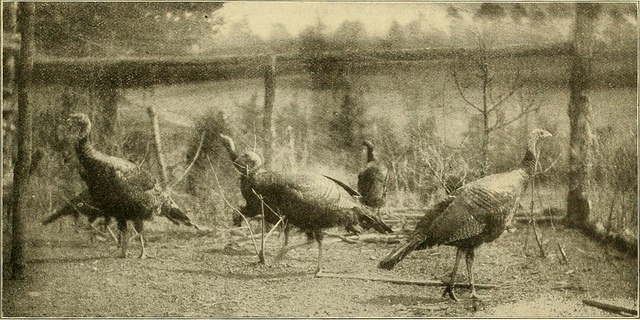 Will wild turkeys ever take over Detroit?

A story caught my eye recently about wild turkeys terrorizing the citizens of Boston. It’s mating season, and mating turkeys can be territorial and aggressive. Plus, they’re big! Too big to be afraid of you.

Boston is not the only city where urban turkeys are strutting their (sometimes threatening) stuff. In 2012, the Milwaukee Journal Sentinel reported on increasingly common turkey sightings around Milwaukee County. (“Wayne Rokicki of Milwaukee was on his way to a zither concert on July 22 at the Villa Terrace Decorative Arts Museum on N. Terrace Ave. when he pulled out his camera to shoot a turkey strutting on the lawn.”) Police have had to ask the citizens of Appleton, Wisc. to stop calling them when they see a turkey. They’ve rebounded in the Bay Area and are harassing people on the campus of UC Davis. (“Police Chief Darren Pytel says his department has fielded calls from people accosted by turkeys, including a man who was pinned against the wall of a bank by a bird.”)

A well-known turkey in Grand Rapids named Larry likes to hang out in downtown parking garages, admiring his own reflection in shiny car bumpers. When I visited Grand Rapids for work in January, I found myself star-struck when I spotted a turkey in Heritage Hill, checking himself out in the back of a Nissan Quest. A Larry spotting! I couldn’t believe my luck. But later that day, I saw a whole rafter of turkeys, at least a dozen of them, stalking and softly gobbling around in a cemetery. Were there more turkeys in Grand Rapids than the people of Grand Rapids realized? Were there not one, but many Larrys? 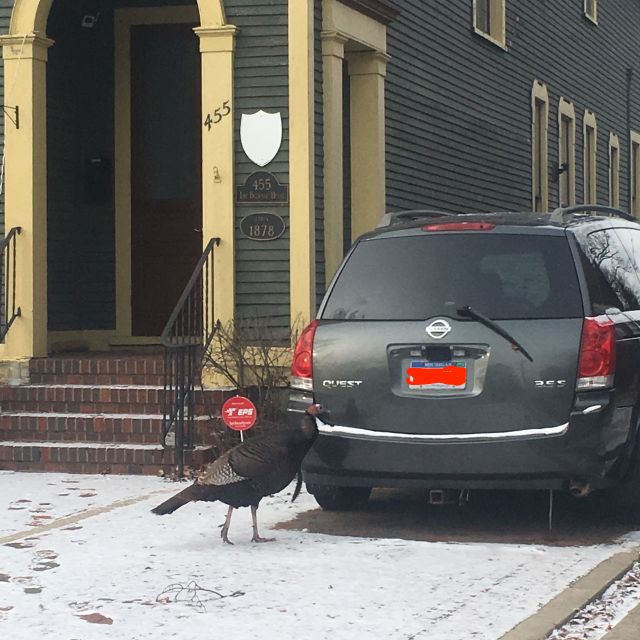 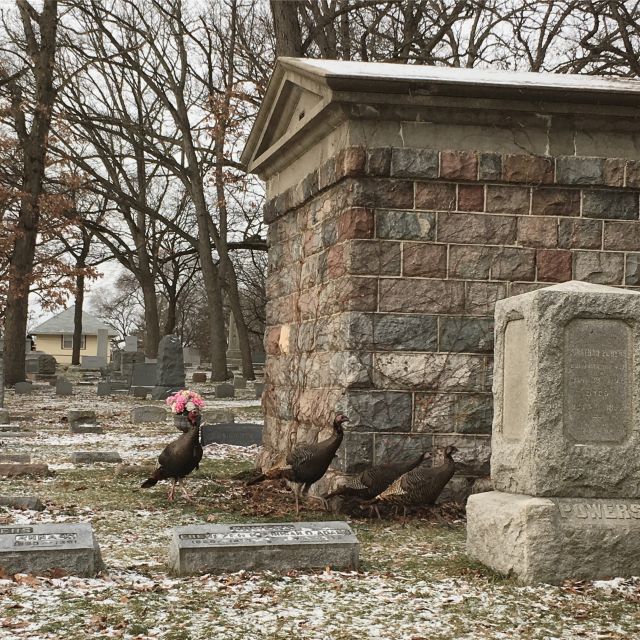 Are they all Larry?

Since then I’ve been wondering if we might be seeing urban turkeys in Detroit before too long. Everyone knows about Detroit’s pheasants, which thrive here because of the abundance of vacant grassland. They are just one of those magical things about Detroit. But I have never seen a turkey in the city. Have you?*

Turkeys were once plentiful across our continent, and in Detroit. An island in the Detroit River known today as Fighting Island was first called “Turkey Island” because, well, that’s where the turkeys lived; Silas Farmer said there were turkeys in the city until at least 1850. But as cities grew, hunters hunted, and forests fell to make lumber and make way for homesteads, the turkey came to the brink of extinction. Turkeys disappeared from Massachusetts in about 1847. Gone from Wisconsin by the late 1880s. Michigan’s last recorded turkey for some 70 years was shot and killed by William B. Mershon of Saginaw in 1886.

But in many states they now terrorize, wild turkeys were reintroduced through the efforts of conservationists and game wardens.

“Why won’t Michigan try to bring back the wild turkey?” asked “Outdoor Affairs” columnist Jack van Coevering in the Detroit Free Press in 1939. The state had made a few failed tries, but other states had reintroduced turkeys successfully, including Pennsylvania and Virginia. “Why is it that the game division is so adamant against the wild turkey experiment? Why is it that the Lansing experts insist so strenuously that wild turkeys won’t succeed in Michigan?”

In 1954, a new turkey reintroduction program was proposed to the Michigan Conservation Commission, but most conservationists thought its chances of success were slim. Game commissioner Harry Ruhl told the Commission that the three-year, $15,000 program was “a marginal gamble at best.” The commission nonetheless approved the project. Fifty turkeys — 38 hens and 12 gobblers — were purchased from Pennsylvania and released in Allegan State Forest, at an “undisclosed location” to prevent poachers from finding them, in March 1954. (Pennsylvania stocked turkeys for other reintroduction efforts across the continent, including one in southern Ontario. Some states swapped fowl; Wisconsin traded some ruffed grouse to Missouri in exchange for their turkeys.)

On Nov. 6, 1965, a hunter named James Woodrow shot a seven-pound turkey hen — “the first wild turkey legally shot in Michigan in modern times,” crowed the Lansing State Journal. The turkey population had reached about 2700 and the 1954 reintroduction effort was deemed a success. In 2014, the Michigan DNR announced that wild turkeys were living in every county in the lower peninsula for the first time in history.

So, will we be seeing turkeys in Detroit any time soon? I reached out to the DNR and asked why we don’t see them in the city proper. Holly Vaughn, wildlife communications coordinator for the Michigan DNR, emailed me back right away and said that while there are some turkeys in Detroit, they prefer the suburbs, where they can enjoy forested environments and agricultural areas with lots of bugs and waste grain to eat. (I recommend reaching out to your DNR once in a while with nerdy nature Qs; it’s a fun way to be a taxpayer that doesn’t involve yelling at your elected representatives!)

But right around the time I started wondering when we’d see turkeys in Detroit, I saw one on Instagram, crossing a busy road.

Maybe it’s not long, now, until they take over Detroit, too.

*Since asking this questions, readers and friends have reported wild turkey sightings in Rouge Park, Eliza Howell Park, Green Acres, and Boston Edison (where a lone wild turkey hangs out with a flock of pheasants). Elsewhere in Southeast Michigan: a beloved and idiotic turkey named Whittaker, who made his home in the middle of a busy intersection in Ypsilanti, tragically but predictably died in a car accident. RIP Whittaker. I remain on #turkeywatch, so please continue to send me your sightings.