Why is Michigan on Eastern Time? Thank (or blame) Detroit.

Tonight in Detroit, the night sky will stay blue and luminous until close to 10 o’clock. Our lakes, our pines, our cabins are defining features of Michigan’s magical summers, but it all happens against a background of long-lingering daylight. This is even truer farther west: lucky friends in Muskegon will enjoy a 9:13 pm sunset tonight, and the sun will not go down in Marquette, in the Upper Peninsula, until 9:28 pm.

We live on the northwesterly edge of our time zone in the U.S.*, so that’s part of our luck. (Seattle, in the northwest corner of Pacific Time, also enjoys a late sunset; tonight it goes down at 8:50 pm.)

But of course, we also have daylight saving time to thank for these late days. If we had not moved our clocks forward an hour in the spring, our sun would set at 7:58 pm; if we happened to live in Central Standard Time that would mean a soul-crushing 6:58 pm summer sunset.

Now you’re set up to grasp the argument of a group of fellas called the More Daylight Club, organized in Detroit in 1907. Michigan was on Central Time. Daylight saving time didn’t exist yet. The sun was setting before 7 pm on summer evenings. And they wanted to do something about it.

Their aim? Surprisingly pure: give people more time to enjoy their summers. More time for golf, horseback riding, nature walks, playing with your kids in the park. Their proposal was a hack-y kind of DST: they wanted to move the states at the eastern edge of Central Time — as established by the railroads in 1883 — an hour ahead, into Eastern Time. 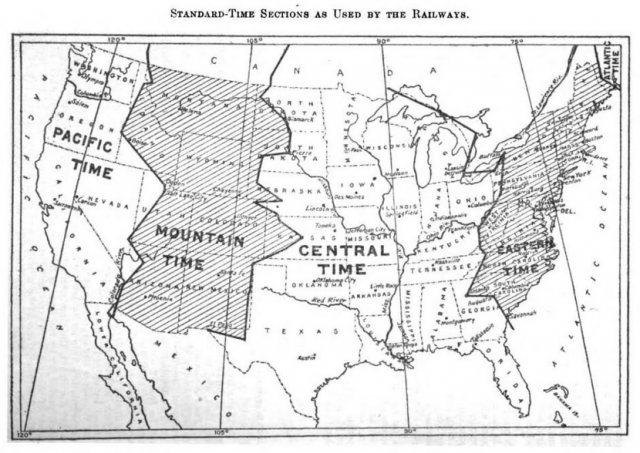 A map of “Railroad time,” established in 1883. More on the history of railroad time in the U.S.

“The wonderful material progress of this great country has almost caused us to forget that there is something worth while besides work and riches,” wrote George Renaud, founder of the More Daylight Club, in a 1916 essay. “The average citizen will not only be healthier, but better satisfied with his lot in life if he can go home early during the pleasant months of the year and be able to take some advantage of daylight.”

The idea was first received as a nutso one. Many thought it was “unnatural” to mess around with the clock, though it had been standardized (by corporations no less!) for barely 30 years. If you wanted more time to enjoy the daylight, couldn’t you just go to work and come home an hour earlier? People also worried about what would happen if a city independently decided to live on its own time zone. Was that even legal? What confusion would it cause for shipping, government, business, not to mention the railroads that created the time zones in the first place? The first Eastern time zone proposal the club brought to a vote in Detroit in 1908 carried zero out of 150 precincts.

The Warner Archive, via Giphy

But the More Daylight Club kept up their advocacy — and gradually attracted allies to the cause. Some automotive companies were persuaded on the promise of more summer evening pleasure drives. (Not Ransom E. Olds, founder of Oldsmobile, who was downright offended by the campaign: “It seems grossly unfair that Detroit should embarrass other municipalities and citizens of Michigan by the adoption of other than legal time,” he wrote in an op-ed for the Free Press.) Retailers, on the hope of more daylight for evening-strolling and window-browsing, jumped on the bandwagon. Others were intrigued by arguments about lower crime rates, improved public health, or electricity bill savings. The More Daylight Club’s members eventually included Detroit Tigers co-owner Frank Navin; John Francis Dodge, of motor company fame; police commissioner John Gillespie; Walter Campbell, President of the Belle Isle & Windsor Ferry; and prominent business leader Dexter M. Ferry of the Ferry Seed Co.

In March 1915, the More Daylight Club submitted to the City Council a petition signed by 25,000 people in favor of the move to Eastern time. A few months later, the Council voted to move Detroit to Eastern Standard Time. Though some doubters (including the editorial page editors of the Detroit Free Press) still thought the move to EST was nonsense and would be ignored, institutions were quick to adjust. Retailers posted their new hours (same as the old hours, but on EST), steamers adjusted their schedules, the Post Office announced that it would move its clocks an hour forward.

Detroit had seceded from Central Time.

Cities across the state eventually followed Detroit’s example: Lansing, Grand Rapids, Battle Creek and Port Huron all eventually moved to Eastern Time, and in 1931 the state legislature voted to adopt Eastern Time as the uniform time zone for the state.**

In the years after Detroit switched to EST, the idea of moving the clocks forward an hour in the summer became more common. During World War I — first in Europe, then in the U.S. — daylight saving plans were adopted as a wartime energy conservation measure. Detroit became a kind of expert witness as the United States considered whether or not to adopt Daylight Saving Time in 1918; George Renaud testified before the Senate that the plan was working well, despite the expected confusion with the railroad.

Detail from a 1918 poster, via Library of Congress 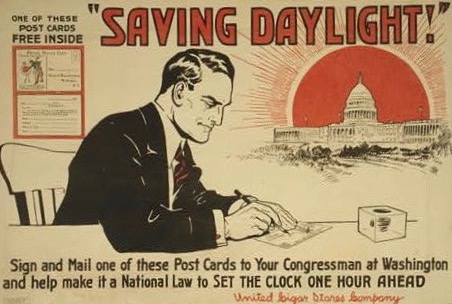 After 1918 (save for a brief return to DST during World War II), the federal government left daylight saving plans up to states and municipalities, which could decide whether and when to be on or off DST. Not surprisingly, over the next 50 years, a patchwork of inconsistent time zones caused problems for broadcasting, transportation, and interstate business — not unlike the era before standardized railroad time. You could drive through four different time zones on a drive from Detroit to Bay City.

Detroit, that old pioneer of clock-tinkering, wasn’t coming along for the ride this time. Michigan was one of the first states to opt out of the federal daylight saving plan.

Because a rift had grown between rural and urban relationships to the clock.

Did you have a vague idea in your head that daylight saving time had something to do with farmers? I definitely did. But farmers didn’t like daylight saving time. Farmers, and their dairy cows and egg hens and peach trees, work by actual daylight, not what time the clock says it is when the sun is up.

“A loss of one hour at the very best part of the day to pick and handle fruit is a loss and a rank injustice to ask of a fruit grower,” wrote one farmer in an op-ed in the Benton Harbor News-Palladium in 1927. “He is obliged to stop picking at the middle of the afternoon in order to reach the market before it closes if he has a few miles to go (as I have).” Farmers said it was hard to find workers who wanted to stay later than 5 or 5:30, which also meant less time for harvesting. The Michigan Farm Bureau estimated that the loss of harvest time would cost $3-4 million in apples alone.

Think of it this way, some said: we’re already on daylight saving time. We’re on year-round central daylight time. That was why we moved to eastern time in the first place: the extra hour of daylight. If we were to layer daylight saving time on top of that, we’d be on “double daylight time.” It kinda seemed like bankers and lawyers in the big city wanted to play more golf while the state’s hard-working heartland busted ass until well after 7 pm.

As the More Daylight Club had done way back in the 1910s, opponents of daylight saving time under the Uniform Time Act cobbled together as many strange bedfellows as they could: owners of bars, bowling alleys, movie theaters and other purveyors of indoor leisure; concerned moms who couldn’t get their kids to sleep when it was bright and lovely well after 8 pm; geographical time purists who were still stuck on central time as Michigan’s rightful place under the heavens. (The Freep — which by now you may have noticed was a constant detractor of daylight time! — opposed “double daylight” on the grounds that it would be “strange and unreal.”)

In 1967, the legislature passed Public Act 6, which exempted Michigan from federal daylight saving time. But the pro-daylight saving time faction would not rest. Led by state senator Raymond Dzendzel, D-Detroit, a petition with 200,000 signatures brought a daylight saving time referendum to a statewide vote. When opposition groups challenged the validity of the petition signatures, state elections director Robert Montgomery became “one of the most harassed individuals in the emotional battle which swirled through the state’s highest courts and seemingly involved everybody from grocery clerks to corporation presidents,” wrote the Lansing State Journal. The governor’s office reported that it received more mail about daylight time than it did any other legislative issue to date that year — including the state income tax.

Voters affirmed Public Act 6 in 1968 by the hair’s-breadthest of margins — just 490 out of 2.9 million votes. Michigan said no to daylight saving time.

A few years later another petition drive, led by Michigan and Detroit chambers of commerce — who argued that being out of step with the rest of the country for half the year, and especially with New York, was expensive and a hassle — finally exhausted the daylight saving time-weary citizens of Michigan. This time, no one could seem to muster the same feverish feelings about DST, for or against. (Here and there, a carp from the time purists: “Living in flagrant discord with the natural solar cycle cannot be beneficial,” a reader wrote in a letter to the Lansing State Journal.)

And so on November 7, 1972, voters repealed Public Act 6. MY GOD, we collectively said. JUST, WHATEVER, THAT’S FINE.

We’ve been on daylight saving time ever since.

Of course, this debate is not over, and maybe it never will be. Earlier this year, the Michigan legislature considered a bill introduced by Rep. Pete Lucido, R-Shelby Township, that would put Michigan on permanent daylight saving time. The Free Press (DST DOUBTING AGAIN!) reported that response to the bill had been “lackluster;” those interviewed revived century-old arguments about golf, sleep schedules, energy conservation. (The business community, which so formidably threw its weight behind Michigan’s earlier time changes, may be cautious about supporting year-round EDT, as my colleague Lindsay Van Hulle reported for Crain’s.)

But when the sun goes down tonight, it goes down on George Renaud time. I will raise a 9 pm glass of rosé in his honor, and I will try to appreciate, for just a minute before the fireflies start to jingle, that these long days we live in — so invisibly, inextricably, powerfully part of our lives — have been invented, debated, and tinkered with, just as much as the lightbulbs we’ve tried to save ourselves from using too much in the summer time.

For further reading: I loved “Seize The Daylight” by David Prerau; it was an essential source for this research and is a really fun read for the dog days summer. Here’s an NPR story about the book from 2005.

TL;DR? This timeline from MLive.com will give you the basics of Michigan’s ages-old time wrangling.

*Not discussed in this entry: Canadian sunsets

**Deciding what time zone the Upper Peninsula should observe was a WHOLE OTHER DRAMA.