Back in January, while visiting my parents in Florida, we took a day trip to Corkscrew Swamp Sanctuary, a National Audubon Society bird refuge and home to the largest virgin bald cypress stand in North America.

In the swamp, I saw a huge bald cypress, tight in the embrace of a strangler fig, named for Harriet Hemenway. Hemenway, an early crusader in the bird conservation movement, threw tea parties for the fashionable women of Boston and asked them to please stop wearing hats decorated with bird plumage. Her work as an organizer of the Massachusetts Audubon Society led to meaningful policy reform, including the Lacey Act, which outlawed the trade of illegally poached animals and plants. (Also: Harriet Hemenway lived to be over 100! Yes to badass centenarian women activists!) The Massachusetts Audubon Society, in turn, helped to organize a national coalition of conservation societies, the forerunner to the National Audubon Society, which was established in 1905.

“Of course a woman founded the Audubon Society,” I thought as I stared up at the tremendous Hemenway cypress. It made me wonder what stalwart woman (or women!) might have helped found the Michigan Audubon Society in 1904.

And that’s how I found Clara Dyar — hiding in plain view on every executive committee of every club and society established between 1900 and 1930 in Detroit, or so it seems. Like Harriet Hemenway spearheading a conservation movement in Boston, Clara Dyar’s influence began with — but went beyond — fancy luncheons and charity balls and created real change, for which she has received zero credit.

Clara Dyar was born in 1869, the daughter of Julia Edmunds Maynard and John Beekman Dyar, a wealthy Grosse Pointer who made his fortune in the radiator business. In 1886, the Dyar family built a mansion they called “Beaurivage,” designed by George Mason. 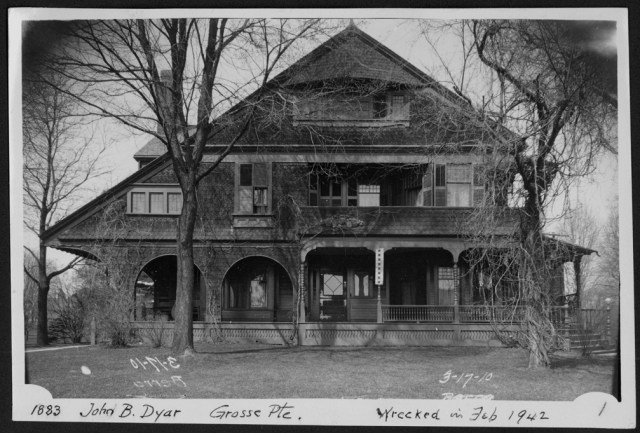 She was raised to be a club woman. Her name begins to appear in the society pages when she is just 10 years old, applauded for the piano recitals she performed as a student of the Detroit Conservatory of Music. In her early 20s she is mentioned frequently in the “lady pages” (for lack of a better sarcastic phrase) as an organizer of charity balls at the Strassburg Dancing Academy and tea parties to benefit the Jefferson Avenue Presbyterian Church. (One nautical-themed tea party in 1889 featured “yacht ensigns and marine signals hung in bright colored festoons over the tables, and the walls were heavily draped with other flags and fishermen’s nets. … The dainty menu was made up of ocean products served in many appetizing ways, and the younger ladies who assisted in the entertainment were all attired in yachting costumes.”)

By the time the 1900s roll around, Clara’s resume reads like Max Fischer’s. Besides the Michigan Audubon Society, founded in 1904 (Clara Dyar personally hounded the state game warden to complain that schoolboys in Grosse Pointe were shooting at song birds), she was a member of the Arts and Crafts Committee at the Detroit Museum of Art (forerunner to today’s Detroit Institute of Arts) and helped to coordinate the museum’s first Arts and Crafts exhibition, which inspired the incorporation of the Arts and Crafts Society in 1906. (Fellow Arts and Crafts Society members included Mary Chase Perry, founder of Pewabic Pottery, and George Gough Booth, founder of the Cranbrook Educational Community.) (Look at this, we’re only through like TWO of the TWO MILLION things Clara Dyar did!)

\She was a founding trustee of the Detroit Society for the Study and Prevention of Tuberculosis, where she was the mastermind of the Blue Star campaign, an effort to create a distinctive emblem for the fight against tuberculosis. She personally traveled to Washington to try to persuade the international Tuberculosis Congress in Washington D.C. that the blue star should replace the double red cross. (She was unsuccessful; the double red cross is still the emblem of what is now the American Lung Association). 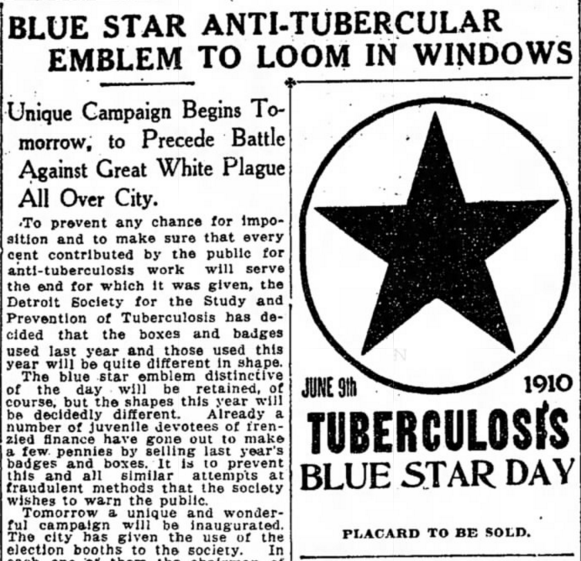 On Blue Star Tag Day — a campaign Clara Dyar organized — volunteers flooded the streets to sell little badges with a blue star emblem, like an olden-days Livestrong bracelet. Wrote Clara in a paper that was widely reprinted in tuberculosis journals (including this one from France!): “In all cases the ‘blue-star tag’ seemed to have a peculiar attraction. Many bought these ‘stars of hope’ to take to sufferers at home, showing their belief in the suggestive power of the emblem. In the factories there was enthusiastic exchanges of coins for stars, and in the public schools the children were eager to buy ‘blue stars’ for themselves and parents and little sisters and brothers at home.” Her efforts raised tens of thousands of dollars for tuberculosis relief in Detroit.

In 1907, the former piano-playing wunderkind launched the Chamber Music Society of Detroit, which would be fair to call her life’s work, if she hadn’t done so much other work. The Chamber Music Society hosted small ensemble concerts in homes, promoted music in schools, entertained officers at Fort Wayne, and hosted a popular and long-running Sunday music series at the Detroit Museum of Art. (A museum newsletter once called Clara Dyar “indefatiguable” [sic].)

Was she a suffragist? Of course she was! Active with the Twentieth Century Club? You know it. She was president of the Drama League, gave speeches at the Detroit Women’s Press Club, published essays about why we should care more about design, and gave this lovely Pewabic jar to Charles Lang Freer.

Clarence Burton, who otherwise wrote mostly about the grand old men of Detroit industry and capitalism, heaped paragraphs of praise upon Clara Dyar in his City of Detroit, 1701-1922 (as a coda to a section on the life of John Beekman Dyar, but we will take what we can get). “In the promotion of various artistic movements in Detroit perhaps no woman of the city has been more prominent than Miss Clara E. Dyar,” Burton wrote. “Her work in this respect has not been for personal gain, nor for publicity, but because of her love of such tasks and a sincere desire to aid in the development of the intellectual and artistic life of the community. Like her father, Miss Dyar is an untiring worker and has accomplished amazing things.” Amazing things! That’s a high compliment from crabby old CB.

This woman played a major but uncelebrated role in elevating Detroit’s emerging cultural life, which is so important when you think about how central the arts, music, and design still are to Detroit’s identity. She wasn’t a visionary leader; she was an organizer and a workhorse, tirelessly keeping the gears of change in motion. Still, reading through dozens and dozens of newspaper clips about Clara Dyar, I found myself smirking a little at her tea-party-throwing, songbird-saving, floral-arrangement-coordinating life, as if the fact that she was a lady of high society somehow qualified her laundry list of achievements. (Although hear me now ladies: I believe strongly in the power of a great flower arrangement.)

So you can imagine my surprise when I found this: 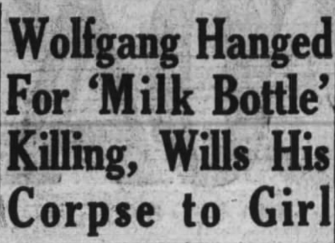 The “girl” in this headline is our own Clara Dyar, who was 57 years old at the time. (She was unmarried, which I suppose may account for her being referred to as a “girl”; perhaps the reporter just assumed that a “Miss” must be young enough to be a girl.) She had befriended and patronized the “milk bottle killer” — his name was Isaac Wolfgang, and he had murdered a milk bottle delivery man — through her work with the national League for the Abolition of Capital Punishment. Clara Dyar, as was her way, was a founding organizer of the league, along with CLARENCE F’ING DARROW, Dudley Field Malone, and Lewis Lawes, the warden of Sing-Sing prison. Wolfgang thanked Clara Dyar personally in his last wishes:

“I also wish to thank most heartily Miss Clara Dyar, my real true benefactor, for her gratuitous Christian love and affectionate loyalty, making it possible for my case to have been heard in all the courts of this country. May God in His goodness enrich her with success and His sovereign grace, is my humble prayer.”

As it turns out, Clara Dyar had worked in prison reform in Michigan, too. In 1916, as vice president of the Citizen’s Welfare League, she organized a prison reform conference to discuss improving conditions in Michigan’s correctional institutions, and was involved in an effort to free Nellie Pope, a woman who had spent 21 years in prison for hiring a hitman to kill her husband.

“As a prisoner Mrs. Pope did not merit clemency,” the Free Press reported in 1918. “On the contrary, her conduct was a continual source of worry to the prison officials and irritation to the other 800 convicts.” (They apparently tried many times to give her a job to do, but Nellie never cooperated: “For a time she darned socks, making as poor a job of it as she could.”) But Clara Dyar wanted people like Nellie Pope and Isaac Wolfgang to have another shot to make something of their lives. Though she had to bury Isaac Wolfgang, she successfully got Nellie Pope out on parole.

So it wasn’t all flowers and waltzes for Miss Clara Dyar.

She never married or had any children. But she was close with her brother Ralph Maynard Dyar, his wife Helen Stearns Dyar, and their children. When Ralph and Helen moved to California to be closer to Helen’s retired father (the pharmaceutical manufacturing magnate Frederick Stearns), Clara started spending her winters in Beverly Hills. Back at home in Detroit, she lived at the Book Cadillac, and threw a party every year before she went away for the winter that always made the society pages, even when she was in her old age. She died in California in 1951, at the age of 82, and was buried at Forest Lawn Cemetery in Los Angeles.I can’t wait to visit her there.

Clara Dyar’s story made me think of something Amy Haimerl wrote in a great essay about Nona Herzog and historic preservation movement in Detroit’s West Village: “… honestly, the story of Detroit is often the story of women empowering themselves and their communities.” I never thought about it quite that way before, but I think she’s right, and indefatigable, untiring Clara Dyar proves her point.

*I couldn’t find any photographs of Clara Dyar, to my great frustration, though I did see a few muddy prints of them, copies of copies of copies by now, in old newspapers of the day. If you have any leads on Dyar family photos please reach out and let me know!