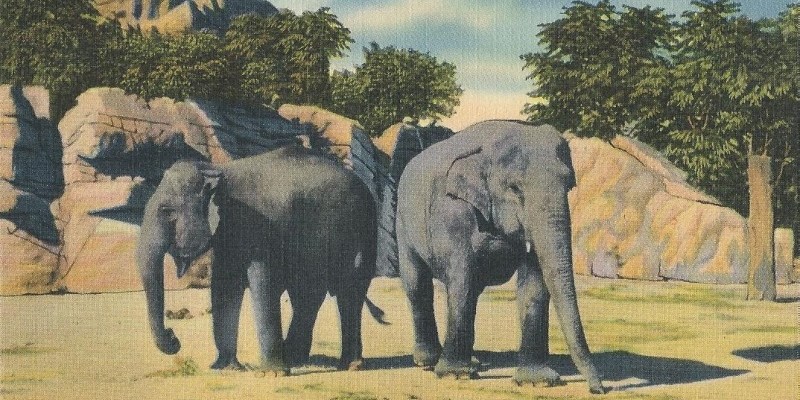 When asked in 1913 what was taking so long for the Detroit Zoological Society — founded on December 14, 1911 — to advance their plans for an ambitious zoological garden, the Society’s director replied: “Any undertaking of such magnitude requires time in getting started.”

We could all do well to have such patience for big things to bear fruit. That said, the director* was not likely expecting it to be another 15 years before the zoo opened to the public.

What took so long, indeed? 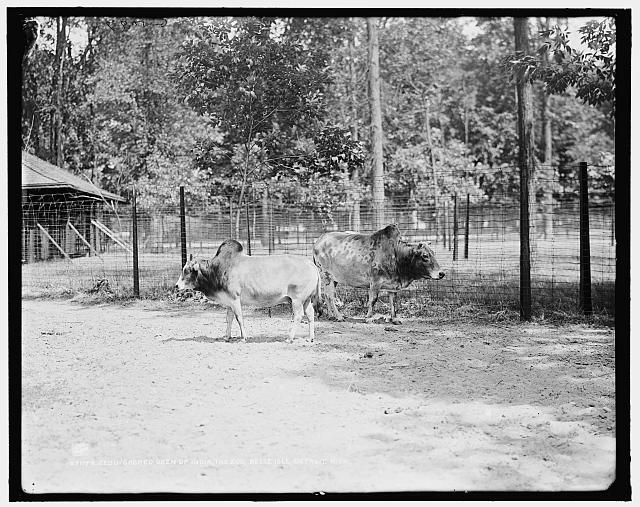 Zebu, sacred oxen of India, at the Belle Isle Zoo. Via Library of Congress.

Let’s back up: Detroit already had a zoo, on Belle Isle, which opened in 1895. But it wasn’t a very big or impressive zoo. Cities of Detroit’s size and stature, like Pittsburgh, Cincinnati, and Buffalo, were investing in jazzy modern zoo projects to attract tourists and provide competitive educational and recreational opportunities to their growing communities. Detroit, with its long tradition of chip-on-the-shoulder take-on-the-world-iness, decided it needed the best, jazziest, most modern zoo in the land. That’s why the Zoological Society was organized, counting among its founding board of directors some very wealthy and influential takers-on-of-the-world, including Henry Ford, Edwin Denby, and castle-builder Frank Hecker.

Then the fun began. The Zoological Society purchased potential sites for their zoo not once, not twice, but three times, beginning with a 200-acre tract west of Detroit, where the Michigan Central Railroad tracks met the Rouge River. I haven’t been able to figure out why this site didn’t pan out — maybe they received an offer they couldn’t refuse, either for the sale of the old site or for the acquisition of the new one — but I do know they sold it to Henry Ford, who eventually used it to build Greenfield Village.

Where to next? The Zoological Society acquired a 235-acre site just north of Palmer Park, south of 7 Mile, near the Detroit Golf Club. Would’ve been a great place for a zoo! The Zoo’s director, the patient Richard Follett, wanted to build botanical gardens there, too. “The need for giving every child an education in plant life cannot be overestimated,” he said. “I propose to have a school there where any child can learn about the plants and flowers as well as about the commercial plants of the world.” (This aside about commerical plants strikes me as very Henry Ford-y — Ford spent the winters in Fort Myers, Florida, where his friend Thomas Edison had a huge botanical research laboratory dedicated to the study and discovery of commercial and industrial plants.)

The Zoological Society wanted to give the land to Detroit for the zoo — on the condition that the city chip in $100,000 for improvements to the site. The City Council wasn’t having it and, in 1915, voted against accepting the land, “after unnumbered verbal battles, hearings, and discussions, which made the subject a monotonous one,” reported the Free Press. (Ugh, been there.) Not to be defeated so easily, the Zoological Society sold the site to the Biltmore Land Company for a handsome sum (the site was developed as the tony Detroit Golf Club residences) and promptly bought a new 100-acre parcel at Woodward and 10 Mile, on the farm of George Hendrie, the wealthy “father of Detroit street railways” who had liked to relax by riding horses on his huge country estate in Royal Oak.

Great, so we’re ready to roll with the new zoo, right? NOT SO FAST, folks. It’s only 1916. We’re still more than 10 years away from the grand opening! WHAT’S TAKING SO LONG? What’s taking so long is here comes this guy — John C. Nagel — to, excuse my language, fuck it all up. 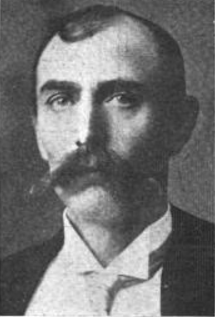 John Conrad Nagel was working as a blacksmith in 1908 when he was appointed by the mayor to serve as a city tax assessor. This enraged Republican politicians, who questioned whether this guy they’d never heard of demonstrated any of the skills required for the demanding, detail-oriented job of tax assessor. But Nagel showed them all: this guy was a dogged tax assessor, driven by a single-minded obsession for increasing the taxable value of property in Detroit. He was so obsessed with this that he was a terrible party guest; the Free Press once reported on Nagel’s anti-social and apparently extremely boring outbursts about tax assessments — yes, tax assessments — at a dinner hosted by John Lodge. He was also disliked for his lack of “moral tone,” by the standards of the day; he was a staunch opponent of prohibition and complained loudly that downtown Detroit’s churches — which occupied valuable real estate in a growing business district — paid no taxes. But by the end of his second term of service in 1914, Nagel had added $87 million to the city’s assessment rolls and took credit for improving home values in neighborhoods that had previously been plagued by dereliction and disrepair. He also kept his day job as a blacksmith. Even the Republicans had to admit that he was pretty good at his job. Nagel was elected to City Council in 1919, where he spent a lot of his time agitating for Wayne County to have stronger representation and more sway in Lansing, as Detroit’s booming population approached close to a million people. 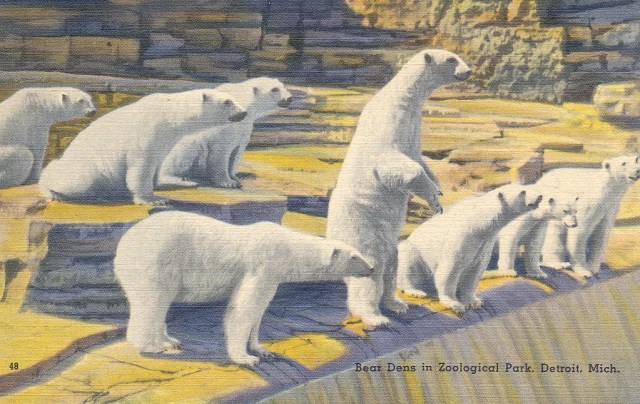 Polar bears at the Detroit Zoo. Vintage postcard from my own collection.

Building the new Detroit Zoo was a moment of perhaps unprecedented regionalism for the local governments of Wayne, Oakland, and Macomb Counties, and I’m not sure anyone totally knew how to do it. (Not that we do now. Though we’re making progress!) When the Zoological Society proposed funding the zoo through a millage, Nagel knew that Detroit, with its disproportionately large number of property owners compared to still-growing Oakland and Macomb counties, would be footing most of the bill. Nagel estimated Wayne County’s share at over 90% of total financial support for the project. And these creeps were going to put it in Oakland County? No way, says Nagel. Oakland County can keep their little 100-acre zoo. Nagel proposes an alternative: a zoo on the Rouge River, on a huge parcel of vacant land 12 miles west of the city center. In Wayne County.

The Zoological Society hates this idea. Woodward is right on the streetcar line, easily accessible from the city and centrally located for Oakland and Macomb County residents, and the road has recently been widened and improved. River Rouge is a long drive for pretty much everyone, with no public transit alternatives. But Nagel won’t let it go. In 1922, he moves to table the proposal at City Council. Then he gets a confusing-as-hell measure on the ballot asking voters to support the alternative River Rouge zoo plan.

Do you favor in preference to any other site, if it be decided to establish a zoological park, that it be placed in the proposed one thousand and sixty-six acre River Rouge park, now under condemnation by the city?

This query we are sorry to say has all the ear marks of a trick. It looks very much like a deliberate, studied attempt to prevent the acceptance of the Detroit Zoological Society’s offer by inducing the people of Detroit to tie themselves up thoughtlessly and unknowingly to another location. … In fact an affirmative vote on this second question will practically bar the people of Detroit from getting a zoological garden.

The zoo, of course, is a massive success for Detroit, and is still today a beacon of regional cooperation. (And cute animals!) It was the first zoo in the country to use “cageless” exhibits that mimicked the animal’s natural habitats — certainly the best, jazziest, most modern zoo in the land and of its time.

Famously, Nagel showed up late to opening day at the new Detroit Zoo on August 1, 1928. (He was acting mayor of Detroit at the time.) He parked his car behind the bear dens and, making his way to the bandstand, was approached by a polar bear who had jumped the moat. Nagel tried to shake its hand, joking: “He’s the welcoming committee.” 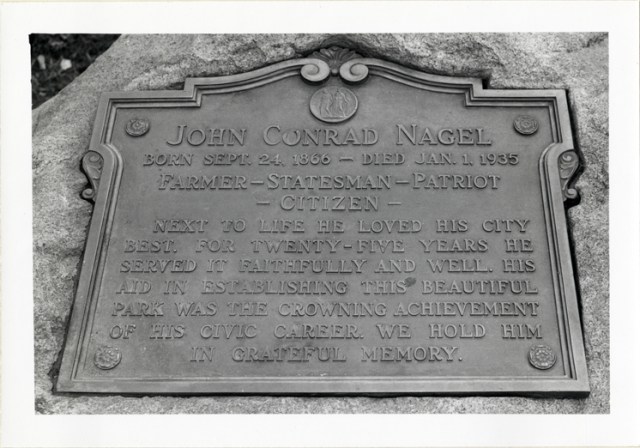 Nagel is remembered for this as a funny footnote of local history, but not for his relentless obstructionism of the zoo in the first place. But here’s a poetic ending: a plaque commemorates his contributions to “the crowning achievement of his civic career.” The city of Detroit, during the Zoo Question of 1922, did acquire that 1000-acre condemned parcel of land.

*The Zoo’s first director, the patient Richard Follett, was a noted conservationist of his day, famous for populating the waters of Michigan’s Upper Peninsula with smelt for sport fishing, for organizing to protect the ruffed grouse, and for saving a flock of trumpeter swans in Montana and Oregon that almost went extinct. Props to you, Richard Follett.