Theodore Finney, the great bandleader, died poetically in 1899. He was riding his bike through downtown Detroit— sheet music under his arm, violin strapped to his back — when he suffered a heart attack. He staggered to the steps of a bank at the corner of Michigan and Griswold, where he died. One obituary writer canonized him “the father of colored music in Detroit.”

Finney had come to Detroit from Ohio in 1857. Here, he founded a band with a business partner, John Bailey, who was also a violinist.

The Bailey and Finney Orchestra was a “society band”; they played swanky parties at Harmonie Hall, the Detroit Boat Club, and at the Masons’ famous St. Valentine’s Day Ball. They played waltzes and quadrilles, marches and brass standards, and maybe a few arrangements that started to sneak a little syncopation into the overall flow of things — not quite ragtime, not yet, but the Bailey and Finney Orchestra may have whetted audiences’ appetites for the off-beats to come. After Bailey died in 1870, Finney mourned, then rebranded; the Theodore Finney Orchestra landed a gig on the Frank Kirby, a steamboat that sailed from Detroit to Sandusky and back. 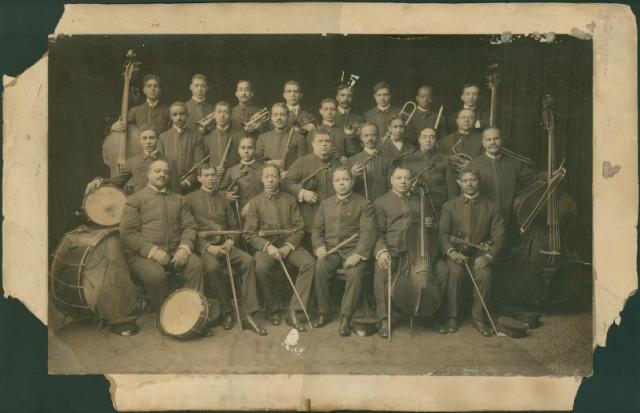 Finney employed and mentored musicians who would become hugely influential in Detroit’s ragtime and jazz culture, including Ben Shook, a violinist who became the Finney Orchestra’s bandleader after Finney’s death; jazz cornetist W. Jack Johnson; and Fred Stone, founder of the Fred Stone Orchestra, one of the most popular bands of its time. Stone, as a composer and arranger, pushed the Finney Orchestra deeper into ragtime’s jagged territory. Here’s a recording of his hit song “Ma Ragtime Baby,” recorded on Edison cylinder:

(Stone, too, died on the streets of Detroit; he misstepped and was killed while trying to board a moving streetcar in 1912.)

The composer Harry P. Guy, another important Detroit ragtime composer (who liked to claim that ragtime started in Detroit), also worked with the Finney Orchestra. Guy died in poverty and obscurity, but in 2003, a couple of citizen activists got together to raise money and put a headstone on his grave. (Theodore Finney, John Bailey, and Fred Stone are also buried at Elmwood. So are Emma Azalia Hackley, the singer and activist for whom the Detroit Public Library’s extraordinary collection of African Americans in the Performing Arts is named, and Fred Hart Williams, the historian and author whose personal papers form a crucial archive of Detroit’s African American history at the Burton Historical Collection, including much of what we know about Theodore Finney.) 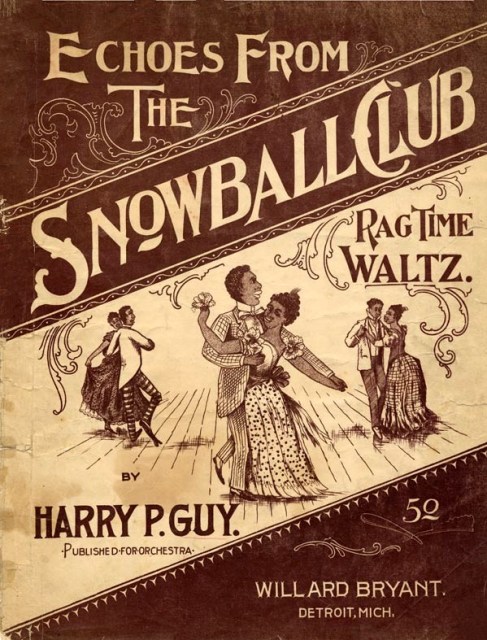 “Echoes from the Snowball Club,” by Harry P. Guy. Published by the music dealer Willard Bryant, Detroit, 1898. Listen to a recording here.

Last week I sat down with the Detroit Sound Conservancy to talk about history, preservation, and Detroit music, and when I shared the story of Theodore Finney, I realized that this is the kind of story we don’t hear often enough — stories about Detroit music before Motown, and before the motor. So I’m sharing it with you today! (You can also listen to my full interview, in which I tell a pretty predictable story about growing up in the suburbs, being fascinated by “edgy” Detroit, and getting into The White Stripes when I was like 16, here.)

And, as luck would have it, this Wednesday, Nov. 12, at Vicente’s Cuban Cuisine — located in the same building where the Jerome Remick Company first published piles of Detroit’s original ragtime hits — historian and author Jon Milan will talk about all of this stuff and play music. Also there will be mojitos. It’s hosted by the Detroit Drunken Historical Society and you can RSVP here.

More reading on early ragtime and jazz in Detroit:

The E. Azalia Hackley Collection of African-Americans in the Performing Arts at the Detroit Public Library is one of the city’s great under-appreciated historical resources. Its includes thousands of pieces of sheet music, as well as photographs, programs, and recordings.

Jon Milan’s book is Detroit: Ragtime and the Jazz Age.