A hundred years ago, in March 1914, the Detroit Tigers were warming up for the season in Gulfport, Mississippi. 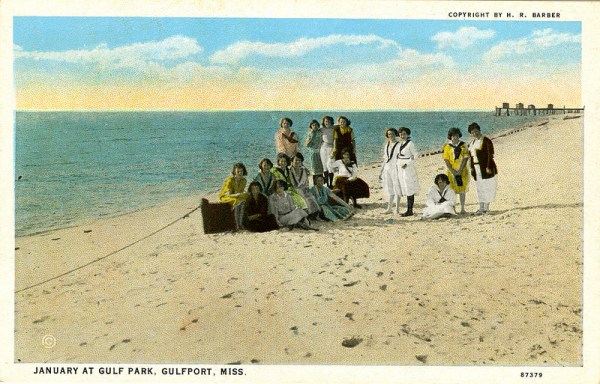 January at Gulf Park, Gulfport, Miss. From the Mississippi Department of Archives and History on Flickr.

Gulfport, a harbor town on the Gulf of Mexico, was barely 15 years old when the Tigers selected it for their spring training camp. It was founded in 1898 as a lumber port, but by the time the Tigers arrived for their first training season in Gulfport in 1913, the town had also become a coastal vacation spot, attracting snow-birds, tourists, and recreational fishers in search of “roses in December” (and, no doubt, beaches in January).

The Tigers had yet to settle on a permanent training camp. In 1911 and 1912, they trained in Monroe, Louisiana, but found the hotel accommodations lacking. An elegant solution existed in Gulfport: the magnificent Great Southern Hotel, one of the most luxurious resorts in the South. 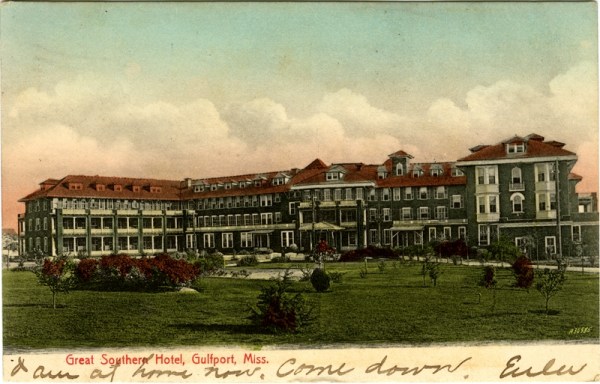 Great Southern Hotel. From the Mississippi Department of Archives and History.

The Great Southern, opened in 1903, had a telephone in every room, running water (hot and cold!), and an in-house orchestra. Each of the hotel’s 250 rooms had a view. (For further reference: this incredible high-resolution panorama of the Great Southern; the longer story — with great vintage postcards! — of the Great Southern’s establishment, its glory days, and eventual decline and demolition in 1951.) 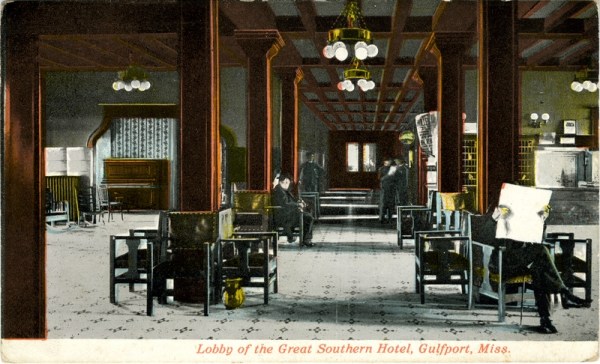 Lobby of the Great Southern Hotel, via Mississippi in Preservation.

The manager of the Great Southern in 1914 was James Lynch — a former baseball umpire, funnily enough. He came from Nevada, where he had umpired in mining towns. Reported the Detroit Free Press:

Baseball in this circuit was supported largely by wealthy mine owners who wanted to give the public a show regardless of expense. … The hotel man tells of umpiring ball games in Tonopath and Goldfield where scores of the spectators were ‘toting guns,’ but he never had the slightest trouble, the miners’ love of fair play and their conviction that he was on the level protecting him.

Lynch volunteered his services as an umpire for any exhibition game the Tigers deemed to play during spring training.

The Tigers occasionally shared the hotel with other conventions, including a group of suffragettes, who came to the Great Southern for a day of rousing feminist oratory. Detroit Free Press sportswriter E.A. Batchelor made light of their rhetoric:

It is just as well for the Tigers that they were busy at the ball park today. A bevy of suffragettes swooped down on their hotel for a meeting and luncheon and after tearing into their food, proceeded to tell the male sex exactly where it gets off. … From the fragments of speeches which drifted into the lobby, it seems that the best of men is lucky to get a draw with a horse thief in respectability and intelligence and the whole trousered bunch is batting about .006. 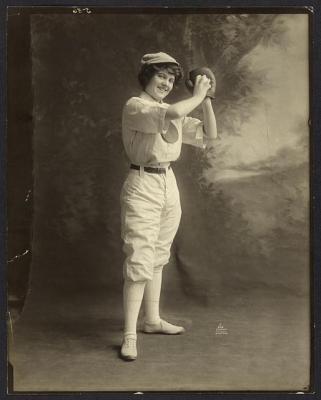 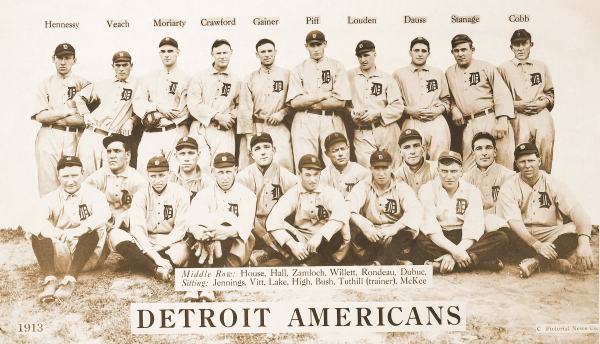 The players spent their free time boating, fishing, golfing (“Toots” Schultz was said to be whittling his own golf clubs out of billiard cues), going to the beach, automobiling, writing letters home, and eating the sophisticated European cuisine at the Great Southern, which caused stomach upset during grueling days of training:

A sample meal for a young ball player who has eaten a light lunch and has about $1.75 left on his daily allowance at dinner time is caviar, sweetbreads with mushrooms, shrimp salad, French pastry, ice cream and camambert cheese. This lay-out is palatable, there is no question about that, but it hardly is the best possible combination for building bone and muscle.

They also loved ice cream: “The Tigers are particularly gripped by this gastronomic vice, and on several occasions they have cleaned the hotels that entertained them of every hit of ice cream, sherbet, punch, and frozen pudding.”

A big show was planned for Thursday, March 19, 1914, with the Tigers scheduled to play the New Orleans Pelicans in Gulfport. It was “the biggest event in the town’s history,” and Gulfport declared a legal holiday. Unofficially, it was “Ty Cobb Day,” a chance for Southerners to see their Georgian hero. The Mayor suggested that all businesses close for the day except restaurants and “soft-drink emporiums.” Visitors came to Gulfport by trolley from Biloxi, Pass Christian, and other Gulf Coast towns, and by train from a hundred or more miles away.

Did this game ever happen? I could find no report from game day the paper. It’s possible that the game was rained out; 1914 was a cold, soggy season in Gulfport, with temperatures occasionally dropping into the 40s. Consequently, the Tigers were said to be relieved when spring training season came to a close on March 25, 1914, and the Tigers left town to play a few exhibition games, including one in Memphis, on their way back to Detroit.

Gulfport’s time as the Tigers’ spring training camp came to a mysterious end in September 1915, when the Great Southern’s manager sent a letter to Frank Navin reporting that Gulfport had been badly damaged by the New Orleans hurricane of 1915, which wrecked the ball park and required the Great Southern hotel to be closed indefinitely for repairs. But the hotel’s owners were shocked when the Tigers decided not to return, and they disputed Lynch’s claims. In fact the ball park was not at all damaged and the hotel would  only be closed temporarily for routine upgrades, they assured. James Lynch left his employ at the Great Southern that November, causing some reporters to wonder whether his letter to Navin had been sent out of spite, or because he believed that the hotel would not be able to handle the Tigers with out him.

Whatever the cause of this perplexing deception, the Tigers packed out to Waxahachie, Texas for the 1916 spring training season. The park where they played is still in use. (!)