Today I want to acknowledge I debt I owe, to a man who died feeling he was owed. 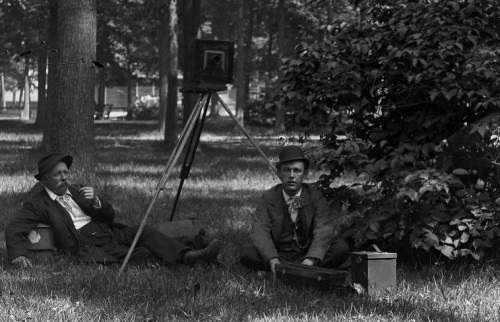 Detail from a photo, c. 1898, via the Burton Historical Collection.

Here is Jex Bardwell, smoking a pipe and relaxing beneath his camera. This guy, with that camera, photographed Detroit for 50 years. His early photos include some of the earliest photographic views of Detroit available to us today. Take, for instance, this view of Campus Martius in 1861, as the First Michigan Volunteer Regiment is presented with colors before marching out to war: 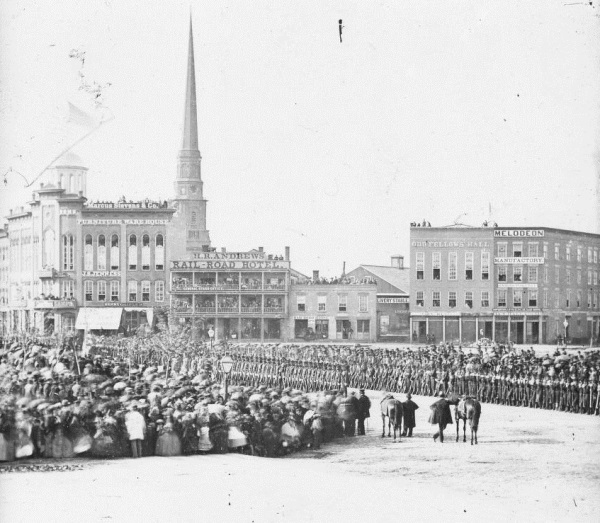 John Jex Bardwell was born in London in 1824. (“I celebrated with much howling and kicking, and from all accounts have kept it up more or less ever since,” he wrote in an autobiographical sketch.) He first came to Michigan with his family in 1834 (they landed in Detroit at the Steamboat Hotel before striking out to Ann Arbor). As a young man, Bardwell trained to be a brewer and distiller — his father’s trade — but on a visit to England in 1845 he became acquainted with daguerreotypy and had a change of heart.

Bardwell opened his first shop in Marshall, Mich. in 1849, where he made daguerreotypes for a living and played around with lanterns and other photographic technologies for fun and self-enrichment. In 1851, Bardwell hosted a week-long lantern show at old City Hall in Detroit, “one of the first demonstrations of the possibilities of the optical lantern in that city,” one critic wrote. Bardwell also loved stereoscopes, even after they fell out of fashion in the 1870s. In a late interview with the Detroit News, he lamented that they were no longer popular and called them “the nearest approach to reality of any photograph ever made.”

Bardwell was a collegial elder of the craft. He subscribed to every magazine available (Wilson’s Photographic Magazine, Anthony’s Photographic Bulletin), went to every conference and meeting on photography he could, wrote papers, gave lectures, and encouraged newcomers to the craft to do the same, with fervor.

“Nothing gives me more delight than to take up some old book or a volume of some photographic journal and find the shadow and sometimes the substances of what is brought out today as entirely new. … Nevertheless, every man, or woman, as for that matter, who photographs, or who is in any way connected with our craft, should take at least one magazine devoted to his art, if he ‘can afford it.’ No! he cannot afford to do without it.”

In the 1860s, Bardwell’s penchant for hoarding his trade papers proved useful. For a decade, photographers had been pained by James Ambrose Cutting’s bromide patent, which required a cumbersome licensing fee for using the chemical in the finishing process. But Detroit photographers — backed up by a bullet-proof argument from Bardwell, built on his extensive personal archive of photography papers — refused to pay Cutting’s agents, claiming that bromide had been in use since Daguerre and besides that was a fading technology. Bardwell even closed his shop and personally fought the patent in court. The patent was not renewed, and photographers all over the country were relieved of the bromide tax. 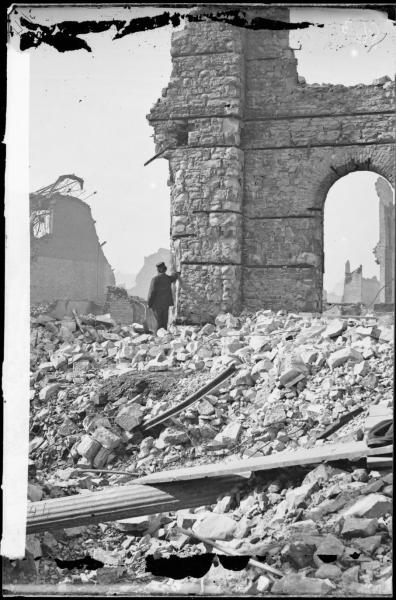 View of the Union Depot after the Great Chicago Fire. Jex Bardwell, 1871. Via the Chicago Historical Society.

Jex Bardwell never felt fully appreciated for his contributions to the Cutting patent victory, which was of course more or less forgotten as photographers got on with their lives in a world without bromide bullies. Later in his life, as he grew old and broke, he appealed to his community of fellow photographers for help:

In writing of these matters I cannot but feel that the services I then rendered to the craft, without expectation of fee or reward, were of such practical and enduring benefit that now, when circumstances are changed and I am in need of help, I may reasonably look to the fraternity for some little assistance. The service I rendered must certainly have saved photographers from a tax which in the aggregate must ere this have amounted to an enormous sum. I am now old, my sight is impaired, and I am able to get only a very poor living by means of my optical lantern. Should sickness or disability overtake me, I would be left a burden to my few friends or to my country; whereas if every photographer in the States would contribute twenty or twenty five cents, a sufficient sum would accrue to enable me to live happily and comfortably during the remainder of my life, and yet the amount would be very small compared with the sum which I helped to save for them.

In response to his pleas, members of the Photographers’ Association of America organized a Jex Bardwell Fund, announcing at their 1896 national convention their intent to raise funds to purchase a home for the Bardwell family. (The Bardwells lived in an apartment and were behind on their rent.) Fundraising did not go swiftly. Wrote one letter to the editor, published in The Photo-Beacon in 1897: “A beginning to this fund was made at the last National Convention, and unless something be done quickly it will never be anything but a beginning.”

In the end, the Jex Bardwell Fund did not raise enough money to buy a house. Instead, the Fund paid for a few months of Bardwell’s rent and, in the end, a different kind of home in Detroit: a plot at Elmwood Cemetery for Bardwell’s wife, who died in 1899, and Bardwell himself, who died in 1902. (Noteworthy aside: Bardwell was a prominent Freemason and an early champion of Scottish Rite Freemasonry in Detroit. His funeral was held at the old Masonic Temple at First and Lafayette.) 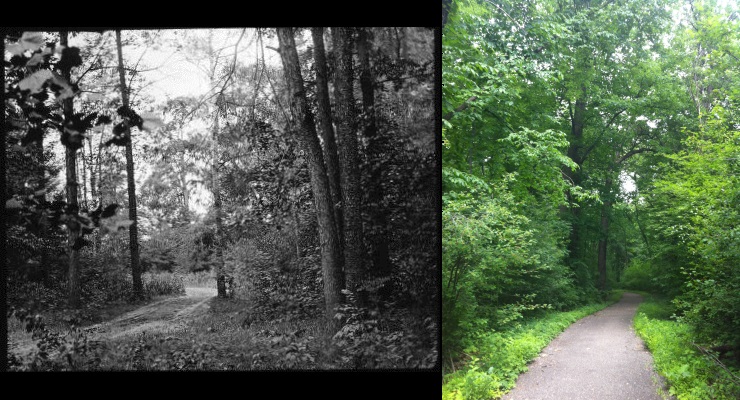 I’ve never been subject to an unfair bromide tax, but the debt I owe Jex Bardwell is real. His photographs are chinks in time, revealing the physical presence of what has been for me a largely imaginary world — a Detroit so old that no one is alive to remember anyone who remembers it. There are over 300 Jex Bardwell photographs in the Burton Historical Collection. It’s a rich archive and I don’t know what I’d do without it. So, Mr. Bardwell, I’d just like to publicly say thanks.

In his day Jex Bardwell was the foremost photographer in Detroit … His life was one long experiment, seeking knowledge among the mysteries of the craft, and that is probably the reason why he ended his life in poverty. He always felt that photographers owed him a debt, which was true.