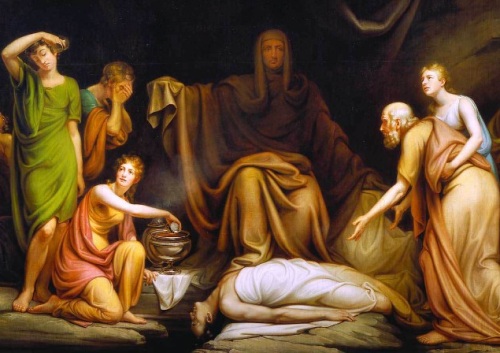 Let’s be up front about one thing: As of this writing, despite what you might have heard, the City of Detroit is not liquidating the art in the collection of the Detroit Institute of Arts. Whether and how that could happen is a matter of speculation; meanwhile, every art critic and art critic’s mother, every parachute reporter, everyone named L. Brooks Patterson, every tourist who wants to see all the paintings before they’re GONE, and everyone else has something to say about the fate of the DIA’s collection, every day since July. Yes, we are all biting our nails over the Bruegel and the Hans Holbein, the Van Goghs and the Matisses, our one splendid Caravaggio. But so far nothing has happened, and we can’t say whether it will, and the people in charge say that it won’t. (Or maybe it will. Or maybe not? Maybe the art will be leveraged, or maybe the state will help? I don’t know, and neither do you.)

THAT SAID: Allow me to jump into this fray and share the story of one painting that will be hard to get rid of, in the unlikely event that works in the collection are liquidated, and the even unlikelier event that this work is one of them.

This painting is also, literally, TOO BIG TO MOVE. 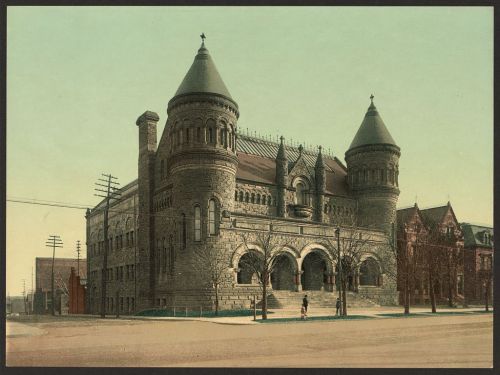 (Detroit Museum of Art, Jefferson Ave. Photochrom print from the Library of Congress.)

When the physical Museum opened to the public in 1888, it was the first space in the city purpose-built to exhibit art. It housed a humble collection donated by a few private, passionate citizens.

There had been art in Detroit before the Detroit Museum of Art. But it was, on the whole, of a folksy breed, not the kind of classical, cosmopolitan stuff that artists went to Europe to learn. Early Detroit art was created by itinerant painters of portraits, pedestrian scenes, and political satires (like this painting of the first State Election in Michigan by wandering artist Thomas Mickell Burnham) — or else it was created by people who used to live here, then moved away (like the frontier painter John Mix Stanley — who ultimately returned to, and died in, Detroit).

The Detroit Museum of Art aimed higher. Its founders aspired to educate a  growing public of art enthusiasts; to redefine what the rest of the country saw as a rowdy, backwater town; to make Detroit into a world-class city — not with industry or power, but with knowledge, beauty, and culture. When asked by the Free Press how long it would take to see this vision realized, James Scripps, a major donor and founding member of the institution, replied: “I shall never see the realization. The babe is not yet born who will see it. It is a matter of a hundred years. This is but the little seed sown in good places.”

This all sounds lofty, and so it is. But you can tell this story through a work of art so self-consciously lofty that it is hilarious to behold: Rembrandt Peale’s massive moral painting Court of Death. You know the one! It’s that huge one. With all the dead people.

“I think I can scarcely do your readers a greater service than to urge them to visit this magnificent painting, the production of Rembrandt Peale, one of America’s favorite sons of genius, now exhibiting at the Capitol.”

Rembrandt Peale, born in 1778,  was the son of American painter Charles Willson Peale (who named a bunch of his kids after famous painters: Raphaelle, Rubens, Titian, his daughter Sophonisba after this gal). The Peales were early American art royalty: Charles Willson painted dozens of famous portraits of the nation’s founding citizens and founded the first natural history museum in the country. Rembrandt started his own museum in Baltimore, and you may recognize his iconic portraits of George Washington, Thomas Jefferson, and William Henry Harrison (back when he was a dashing young war hero and not yet our country’s shortest-serving President). If you, like me, are a frequent visitor to the DIA’s American art galleries, you might also be familiar with his striking self-portraits.

Rembrandt Peale painted Court of Death in 1820, then sent it on a tour of the country. More than 32,000 people paid to see it, and the tour earned him $9,000 in its first 13 months — nearly $150,000 in today’s cash. (In the era before every city had an art museum, touring paintings were how people saw art, and they were the rage — the bigger, the better. In this way, Court of Death is connected to the panorama & cyclorama painting craze, which is one reason I love it so much.)

So what’s this painting like? Besides enormous? (Over 300 square feet of canvas! I lived in an apartment the size of this painting.) Peale took his inspiration from a poem by Bishop Beilby Porteus, which went something like this:

” — Deep in a murky cave’s recess
Laved by oblivion’s listless stream, and fenced
By shelving rocks and intermingled horrors
Of yew and cypress shade; from all obstrusion
Of busy noontide beam, the Monarch sits
In unsubstantial majesty … “

At the center of the painting,  in robes and shadows, is death — a king, and a judge. Death’s foot rests on the chest of a corpse, the body of a man previously in his physical prime. The corpse’s head and feet lay in the unknowable waters of oblivion.

Surrounding the dead man are figures (300 square feet of figures!) representing various afflictions, plagues, and bad attitudes that can lead you to death’s cold lair. To the left, self-destructive behaviors parade: Pleasure, Remorse, Suicide, Intemperance and Delirium Tremens (because of course), Gout, Apoplexy, Dropsy, and Consumption. On the right, violence and tragedy: the horrors of War, Famine, Pestilence, and Conflagration, and the widows and orphans they create. 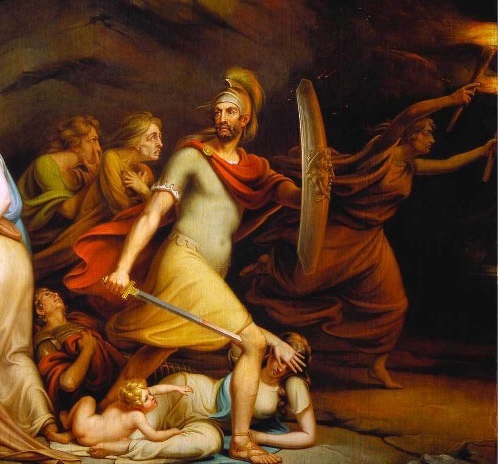 (Another detail from Court of Death. That’s War with the sword and shield, in case you weren’t sure.)

But close approaching death, with his arms open wide, is an old man — and he’s led on his way by a radiant blonde, her innocent eyes cast heavenward. It’s Old Age! And he has Faith (aforementioned blonde), so he doesn’t fear death. (The old man, by the way, is a portrait of Charles Willson Peale. Rembrandt Peale’s sisters are playing the parts of Faith and of Pleasure, and one of his brothers, “though of irreproachable temperance” wrote Peale, stood in for one of the drunks.) Peale had to have known that this painting, with its moral so unimpeachable, would be a blockbuster. 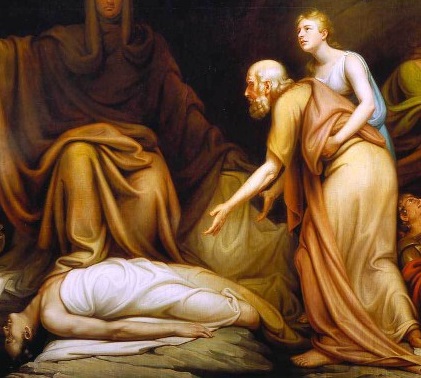 Court of Death, which continued to tour the country for decades after its debut, first came to Detroit in 1847, where it was displayed in Representative’s Hall at the old Capitol Building (in present-day Capitol Park). Before it even arrived, one writer for the Free Press supposed it to be “one of the most magnificent works of art ever produced in the country” (based on notices from other cities and the recommendations of some “distinguished clergymen and citizens of Buffalo”).

Detroit in the 1840s in many ways still felt like the frontier, although by then the idea of the “West” had extended far beyond the Great Lakes and into the plains and beyond. The year Court of Death came to Detroit, 1847, was the year of the city’s first horse-drawn streetcar. That March, after a decade of pressure from interests in Michigan’s recently-settled rural areas, the state capitol was moved from Detroit to a hastily-constructed building in Lansing. Railroads and plank roads had replaced rivers as the primary mode of transportation. Out west, John Mix Stanley explored the newly-incorporated Oregon Territory with Col. Stephen Watts Kearney.

Court of Death eventually fell into private hands, and stayed that way for nearly 40 years. Then, in 1885, the painting became one of the earliest in the permanent collection of the Detroit Museum of Art. Court of Death was a gift of George Scripps (brother of James), who had purchased it from a collector in St. Louis. The collection was still homeless, but momentum had gathered behind the idea of building a permanent place for art in the city; two years earlier, the Art Loan Exhibition of 1883 had been the biggest art event in Detroit since the 1850s. On April 16, 1885, the Detroit Museum of Art was formally incorporated, and plans were hatched to raise funds for the construction of a permanent building. 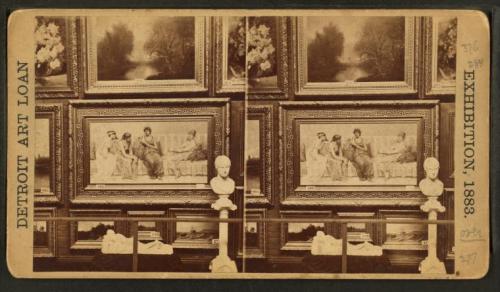 (Exhibition of paintings at the Detroit Art Loan Exhibition, 1883. Via NYPL.)

Detroit in 1885 was home to more than 130,000 people — perhaps 10 times the population of Detroit in 1847, the year Court of Death first came to town — and the city was starting to blossom. Electricity illuminated Grand Circus Park and Woodward Avenue. Telephones existed! The young folks who had come to the city in the frontier days were now rich old dudes who built lavish mansions. People wanted parks, pretty boulevards, and better roads on which to ride their bicycles. The art museum itself was part of this spirit of urban engagement, investment, and improvement.

Detroit, in short, was a different Detroit. And by this time, Court of Death was a different painting, and American art was different art. Wrote a critic in 1874 for the New York Times upon a visit from Court of Death: “The composition … is of interest more as showing the class of picture which ranked here as a work of high art two-thirds of a century since, than from any special merit of its own.” (Still, the critic praised the painting for having a moral, “which works of this class sometimes fail to do,” and urged readers to see it.)

But Court of Death reminds me that art is about who we are, both in its highest ideals — Van Gogh makes us feel singularly human; this is priceless and true — and its physical form. How did this painting get here, and when? Who made it? Who bought it? And why?

The DIA’s collection is important not just intrinsically (i.e., a Van Gogh in Detroit is of value, but no more than a Van Gogh in Fresno, as some critics have argued), but contextually. When I visit Court of Death, I see a goofy painting — but a painting that is connected to Detroit at more than one moment in time. The doubtless muddy visitors who paid 25 cents to see it in the dim old Capitol Building. The better-heeled crowds who saw it in the Museum they could finally call their own. The painter who painted it, and the people he painted. The teenagers who see it now and wonder at its morbid visions, as I did when I was a teenager. Those Van Goghs, this Peale, that Bruegel may be relevant and worthy from here to Hong Kong.  But these works make the DIA what it is, shape how we experience it, and are part of the stories we tell about ourselves.

So please, Kevyn Orr, don’t sell it. But even if you do, good luck moving it. A docent told us earlier this year that during the 2008 renovation of the museum, the painting was left where it was and enveloped in its own climate-controlled, dust-proof room, rather than removed and re-installed. Or take a cautionary tale from Baltimore, which hosted Court of Death at the Municipal Museum in 1947. As the Baltimore Sun headline read:

“Baltimore may have to buy Peale’s ‘The Court of Death’; Detroit Museum wants painting back, but removal may prove to be impossible.”

For more on the DIA:

HistoricDetroit.org on the history of the Detroit Museum of Art / the Detroit Institute of Arts

Works relevant to Detroit history at the Detroit Institute of Arts