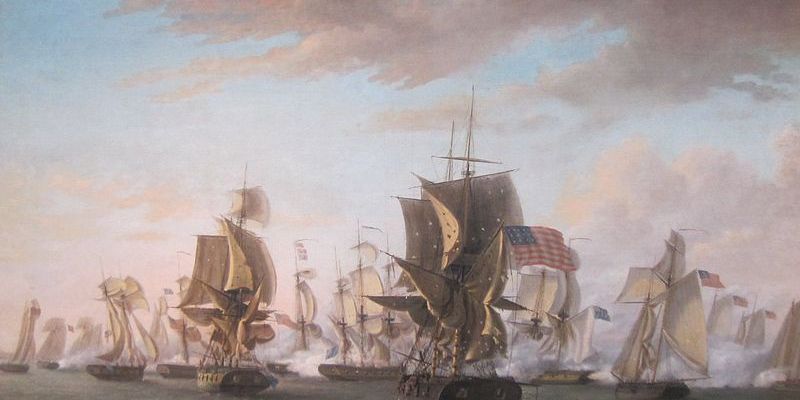 Today is the bicentennial of the Battle of Lake Erie

This is a big deal! 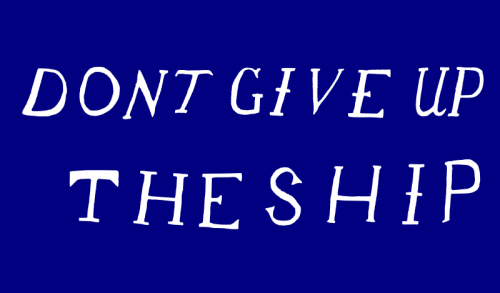 It is also the occasion for a special show at the Toledo Museum of Art, Perry’s Victory: The Battle of Lake Erie, on exhibit through Nov. 10. If, like me, you have failed to get yourself to Toledo even though you know it’s not that far away, here is a perfect and timely excuse.

Last year, on Aug. 16, we remembered the bicentennial of the surrender of Detroit. Throughout 1812 and 1813, war efforts in the Northwest focused on winning back Detroit and preventing any further British encroachment into the territory. But due to a series of bad moves and bad luck, it took until Sept. 10, 1813 — the Battle of Lake Erie — to gain control of the lakes and win back the city.

So as long as you’re out for a cruise, why not make it a field day? I have some suggestions. Naturally. 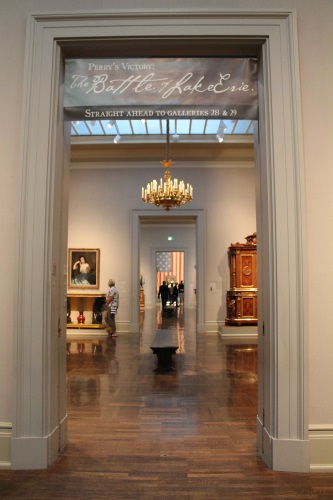 Here’s something I never stop thinking about: So many Kentucky soldiers died in the Battle of River Raisin that there is a monument to their memory in Frankfort, KY, in the same cemetery where Daniel Boone is buried. There is also a memorial in downtown Monroe to Kentuckians killed in the Battle of River Raisin, beneath which remains of unidentified soldiers were buried. While I suppose dying in battle in Michigan is no different from dying in battle in Baghdad, I am still dumbstruck when I think of all of the people who came as strangers to this place that matters to be so personally, and died for it. It feels personal.

On Jan. 18, 1813, Americans won the first Battle of River Raisin, forcing a British retreat from Frenchtown. Four days later, before sunrise on the morning of Jan. 22, the British and the Indians counterattacked and forced an American surrender. Nearly 400 Americans were killed in the battle, and possibly 30 to 100 more (most of them already wounded) the next day, burned out of their beds and marched to Fort Malden and killed on the spot if they couldn’t keep pace. It was one of the deadliest battles of the war, and the bloodiest ever fought in Michigan. 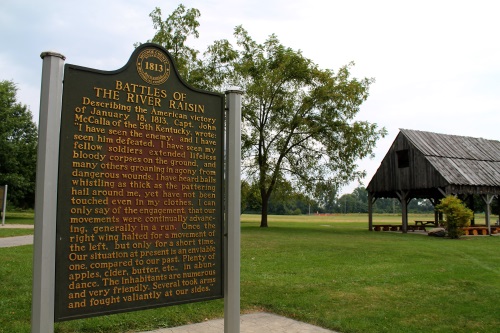 William Henry Harrison built Fort Meigs in 1813 as a supply depot and HQ for his campaign to retake Detroit.

We stopped by Fort Meigs on our way to a wedding in central Pennsylvania, although it’s generous to say we were anywhere near “on the way,” given how close Fort Meigs is to home. As my clearly annoyed husband said as we roamed the grounds: “Do you realize they built this fort so the army could walk to Detroit?” 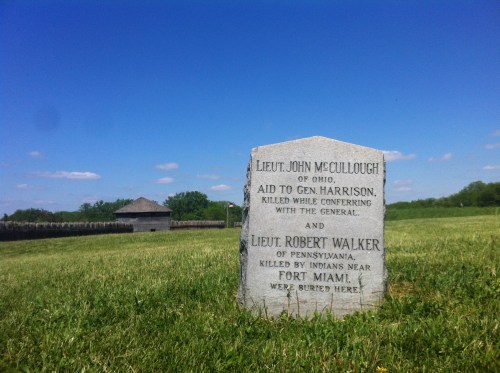 (A little mystery exists about this grave, which you can read about here.)

The British tried and failed twice to siege Fort Meigs – on May 1, 1813 and again in July. After the second attempt, Harrison ordered the fort dismantled. Today you can visit the original grounds of Fort Meigs, surrounded by a replica of the fort reopened to the public in 1974. 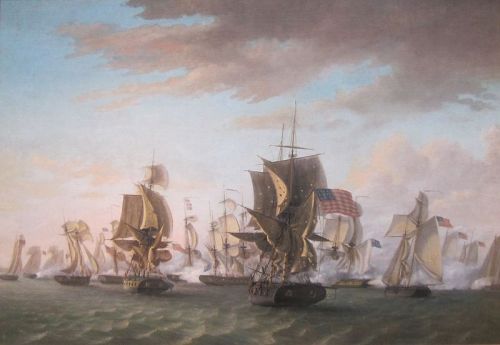 Two major works are at the heart of the Perry’s Victory exhibit at the Toledo Museum of Art: the famous Gilbert Stuart portrait of Oliver Hazard Perry, which is part of the TMA’s collection, and the massive 1814 Thomas Birch painting Perry’s Victory on Lake Erie, on loan from the Pennsylvania Academy of Fine Arts.

The exhibition also includes historical documents (many of them from the William L. Clements Library at the University of Michigan, including one of six original copies of the Treaty of Ghent), lots of prints and lithographs of the battle, and souvenirs, including books, clocks, and a cotton handkerchief with the date of the battle printed incorrectly.

But here’s my favorite part of the show: 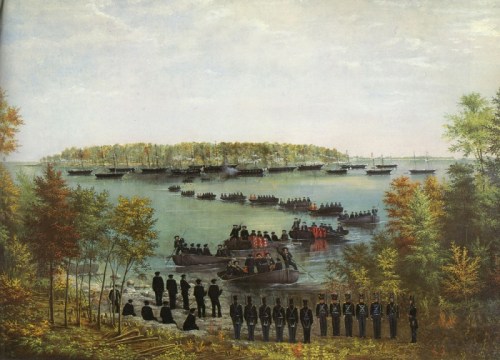 [Burial of the Officers Slain at the Battle of Lake Erie, Louis Bennett Chevalier. ca. 1860. Source.]

This painting illustrates the morning after the battle, when six fallen officers — three Americans, three British — were buried on South Bass Island. If you’ve followed this blog for a while or read the book, you know I have obsessed over this burial, since one of the American officers buried that day, Lieutenant John Brooks Jr., was (supposedly) disinterred and re-buried in Detroit in 1817.

The painter, Louis Bennett Chevalier, was from Erie, PA, but he settled in Detroit in 1875. Information about this guy has been hard to find, but he turns up variously winning an award for a painting at the 1878 Michigan State Fair, working as a decorator for the Pullman Car Company, living on Labrosse in the 1880 City Directory (listed under “Artists”), and painting drop curtains for opera houses in Jackson and Coldwater in the 1880s.

One more thing I love in this show: a cane that once belonged to Henry Clay, engraved with something famous Henry Clay once said: I’d rather be right than be President. I followed the rules and did not take a picture of this cane, so instead, here is a mint julep we drank earlier this year in Washington D.C., at the bar where Henry Clay introduced the mint julep to America. 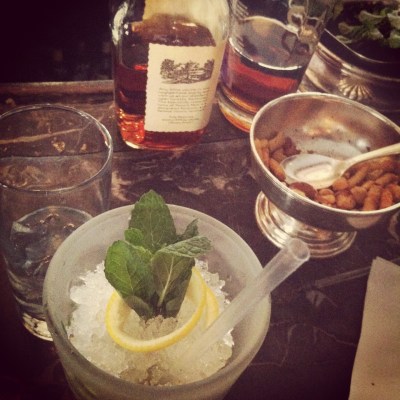 I recommend that you capstone this field trip with a contemplative gaze over Lake Erie.

You could of course head all the way to Put-in-Bay and visit Perry’s Victory Memorial. Embarrassingly this is something I still have not done. If you just want some surf, a blue horizon, and a mood of reflection, head to Lake Erie Metropark, Sterling State Park, or borrow your friend’s boat and set sail. 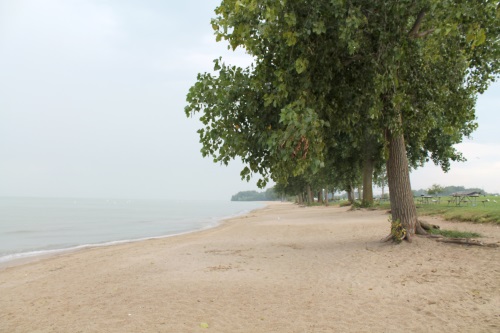 Don’t give up the ship.