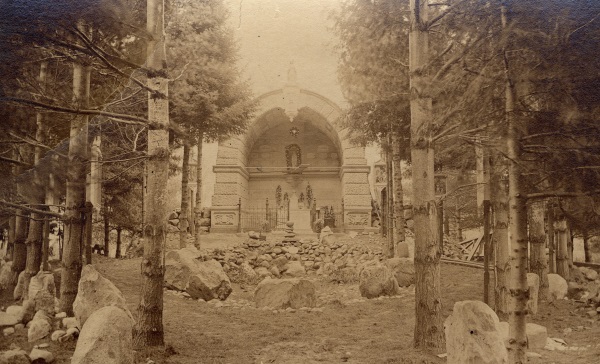 Every cemetery in Detroit: Assumption Grotto

Photo from the Burton Historical Collection. Date unknown, but the grotto appears to be under construction. 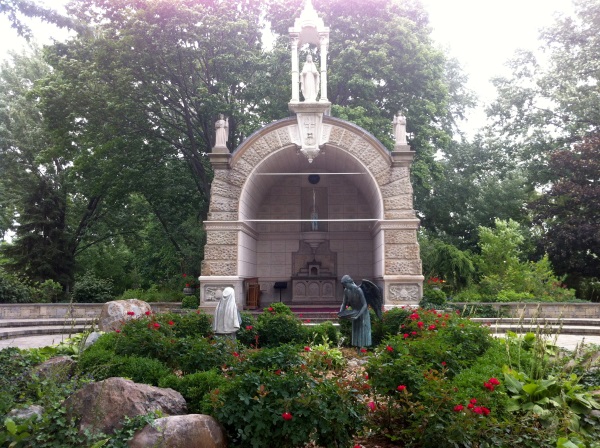 The early 1830s brought thousands of people from across the globe to the rowdy little river town of Detroit. (Thank you, steamboats!) It also brought an epidemic of Asiatic cholera that would kill nearly a seventh of the population by 1834. (Damn you, steamboats!)

In 1832, hoping to avoid the scourge of cholera, a group of German immigrants packed it out of town and started an isolated settlement in the wilderness. For a church, they built a log cabin and called it kirchen wald — church in the woods.

That wilderness is now  McNichols and Gratiot, and that log cabin is an imposing neo-Gothic cathedral called Assumption Grotto (13770 Gratiot Ave.), named for the once-famous shrine in its shaded graveyard. 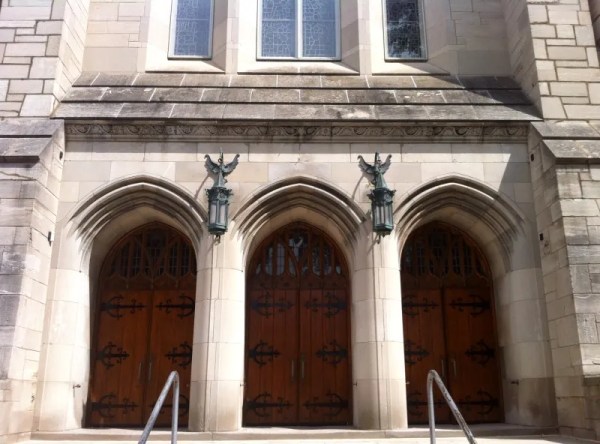 The current church building dates to 1929. An earlier church, built in 1852, looked like this: 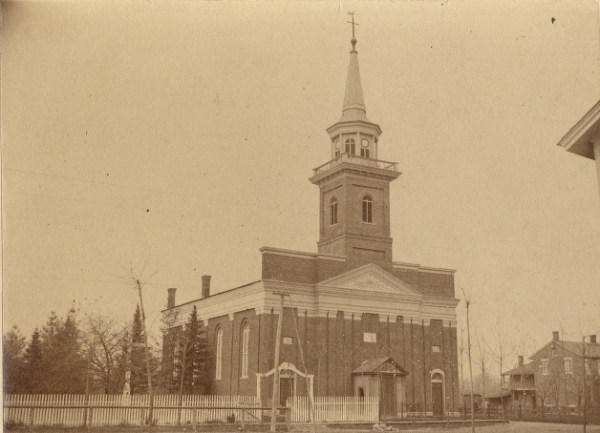 Photo from the Burton Historical Collection, 1882.

This church burned beyond repair in 1907. Worshipers were at mass when the roof caught fire; no one noticed until two chandeliers crashed to the aisle below.

This is all nice-to-know. You need to know about this Grotto.

Father Amandus Vandendriessche was a Belgian who came to Detroit around 1851. He was an itinerant priest, boarding with his congregants at Kirchen Wald and riding through the woods to minister to a few other country parishes. Under Father Van, the congregation built its permanent home and grew its flock.

As the story goes, Father Van was inspired by an 1876 visit to the Sanctuary of Our Lady of Lourdes in France, and upon his return decided to build his own holy grotto in Detroit. He laid the cornerstone in 1881. 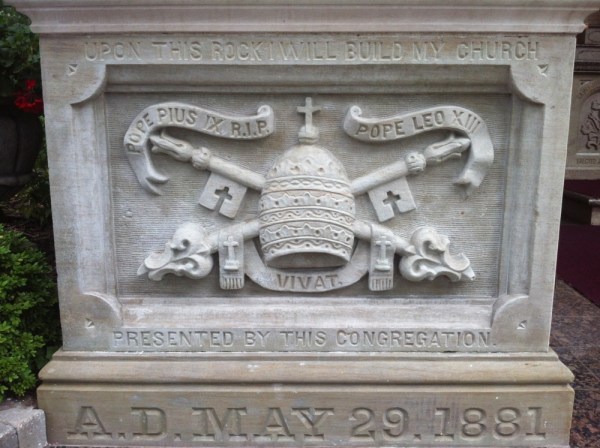 Designed by architect Peter Dederichs, the Grotto is approached by a 900-foot-long tree-lined walk through the graveyard. There’s a statue of the Virgin Mary on the roof designed to be seen from a distance and, in front of the grotto, a fountain. The water supply, reported the Free Press in 1881, was to be mixed with water imported from Lourdes. 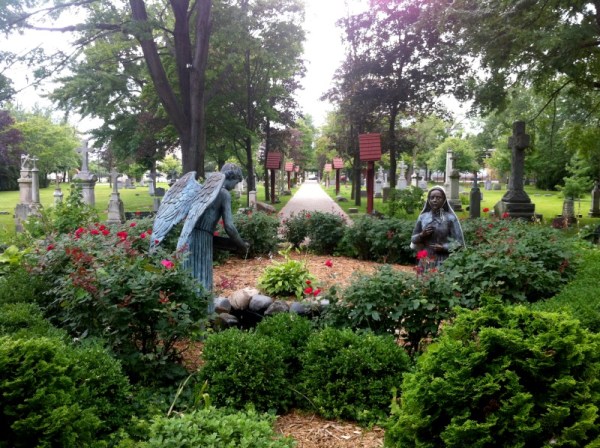 A more peaceful or retired spot could hardly be imagined, and yet this little country churchyard only a few years ago was the objective point of thousands of pilgrims who came from the city in throngs to worship at the shrine of the Blessed Virgin Mary located there. Here at the far-famed Grotto, which gave the church its popular appellation, hundreds of those sick in body, mind and soul have invoked the aid of the Blessed Virgin and found relief from physical pain and mental suffering.

The cemetery itself is filled with tombstones in German, French, and English, some Rivards and some Schoenherrs, some people born in England, in Ireland, in Scotland. 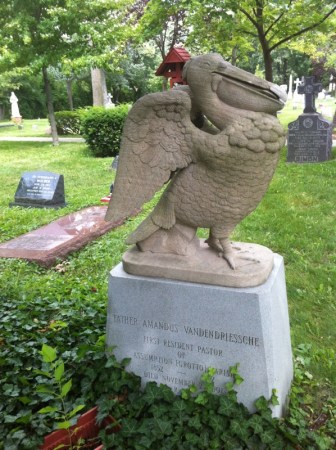 Here lies Father Vandendriessche, first resident pastor of Assumption and the man behind the Grotto. The pelican symbolizes charity and self-giving. 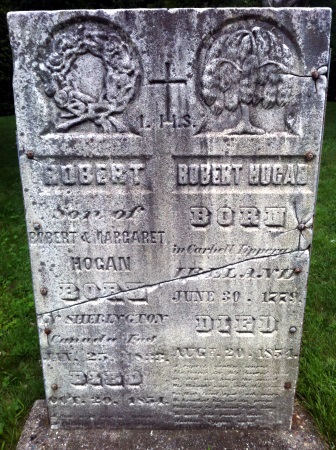 The oldest tombstones I could find, on the south side of the cemetery away from the main walk, dated from the late 1840s and early 1850s. 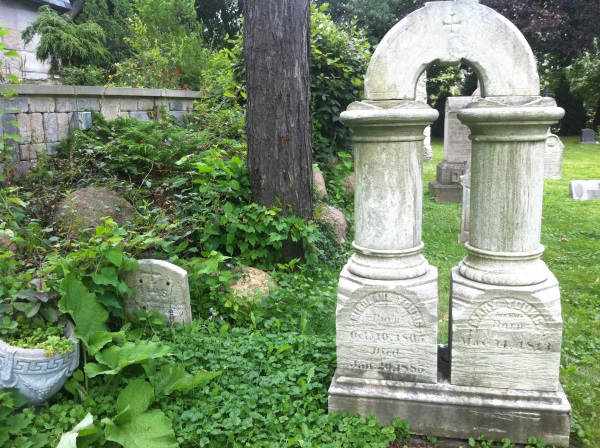 Is there a word for graves that are never filled by those who reserved them? Here’s Nicolaus Young, who died in 1885. Though the arch design is elegant, his wife Mary Young, b. 1813, is not here. Unless she’s alive and well at 200, she’s buried somewhere else. But where? And why? 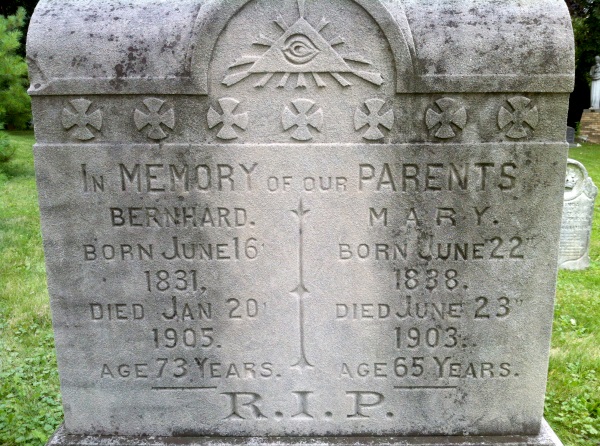 The all-seeing eye. I had never seen this on a tombstone before. But if you look closely at the 1852 Church of the Assumption … : 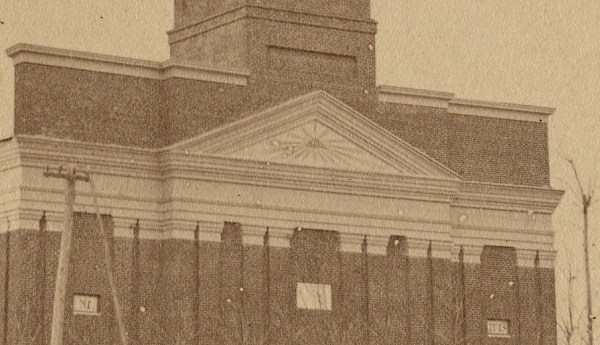 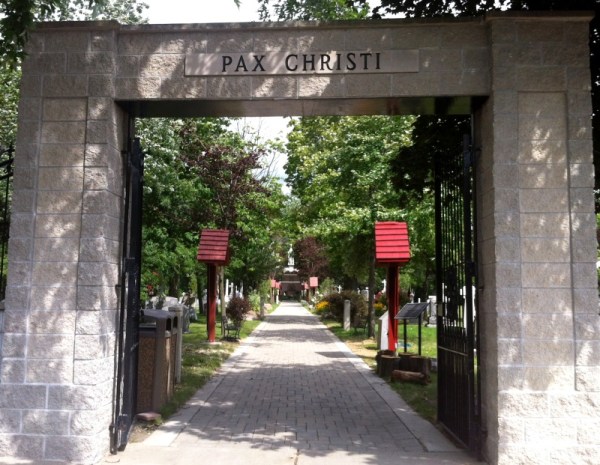