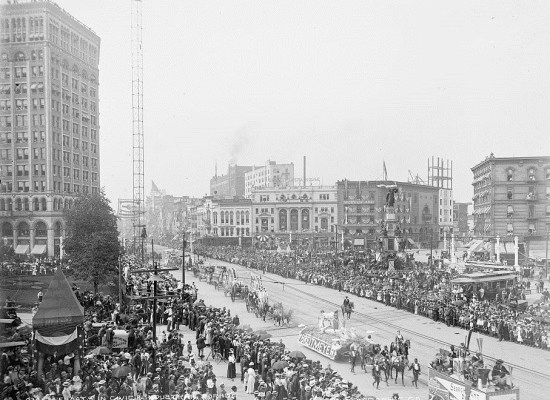 Where to celebrate Detroit’s birthday 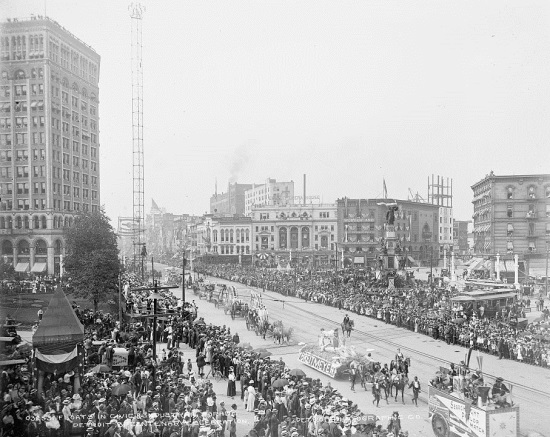 America has but few cities that can properly be called old. Detroit is one of these …

Detroiters used to LOVE to celebrate this day. In 1893, it was Cadillac Day, hosted by the Wayne County Historical Society. They held a parade from Grand Circus Park, rented a steamboat for 2000 people to party upon, and invited a bunch of old people to talk about the old days and put into perspective just how far Detroit had come.

The city of Detroit now stands without a peer in all this broad world of ours … When I hear gray-haired men talking of Detroit when there were only a few log houses here, and they used to cut trees where the principal streets are now, my mind goes back to the pioneers of them all — those sturdy men who first pushed their canoes into Detroit river. I think there must have been a fascination about that discovery that is ahead of any sensation of modern civilization. You may talk about your sunny shores of the tropics, but no such men are there as are bred in our northern countries. In the days when you pioneers first came to this city your transportation was by ox teams and your asphalt pavements were corduroy roads, but you had friends and good stomachs and enjoyed your salt pork and corn bread better than the finest cuisine of the modern chef.

This year I know of a couple of places where you can celebrate in style:

Forward Arts is throwing a party at Rodin to benefit the Belle Isle Conservancy. There will be drink and food specials, a French-y vibe, DJs, Dutch Girl donuts, and general merriment. And I have been commissioned to deliver the OFFICIAL BIRTHDAY TOAST at 6:30 p.m.! This is an enormous honor for me so I hope you’ll join me, in person or in spirit, in lifting your glass.

Down the road, at Hart Plaza, the Detroit Drunken Historical Society will gather by the statue of Antoine Cadillac and have a surreptitious armagnac toast to our founding rascal, followed by post-toast drinks at Joe Muer Seafood in the Renaissance Center.

At the very least, read (to yourself! to your cat!) Cadillac’s description of his arrival at Detroit in 1701, and think about the past, the present, the future, and reflect on Detroit as part of your life.

Here’s the letter I wrote to Detroit two years ago to celebrate this anniversary.