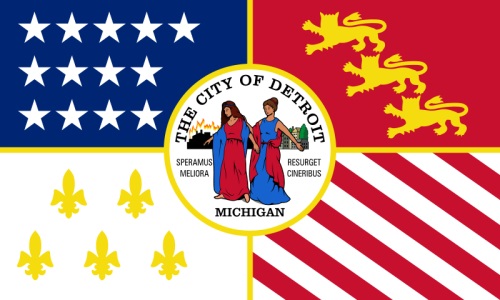 Do other cities love their flag the way we love ours?

This flag is full of fate and pathos, and maybe that is why we are bound to it. At its center, of course, is our tragic seal, certainly the saddest city seal ever, in which the city is, no joke, burning to the ground. A woman weeps; she is comforted by a sister whom we are invited to imagine is uttering the fateful words of our city motto: Speramus meliora, Resurget cineribus.

We hope for better things; it shall rise from the ashes. Don’t cry.

We wrote these words in 1805, when our city burned to the ground. It was not the first time. It was the worst time, but it was not the last.

It’s a flag of nations, occupations, wars. The fleur de lis represents French settlement of Detroit in 1701. The golden lions stand for Detroit under British rule, from 1760 to 1796. (You’ll remember that we used to celebrate July 11 as Evacuation Day, the anniversary of the British finally leaving, compelled only after long and bloody battle with the Northwest Indians.) The stars and stripes appear twice, because during 1812 we surrendered our fort to the British. Stars for 1796 – 1812; stripes for 1813 and on.

Detroit’s flag first flew on June 12, 1908, on Pennant Day, celebrating the hoisting of the pennant won by the Detroit Base Ball Club. (Appropriate.) It was designed by David Emil Heineman (1865-1935), a state legislator (urged to run for office by Gov. Hazen Pingree himself), city Alderman, city Controller, co-founder of the Robert Hopkin Club (later the Scarab Club), and instrumental actor in establishing Detroit’s Art Center (today we call it the Cultural Center), anchored by the Detroit Institute of Arts and the Detroit Public Library. Thanks, David Heineman! He was also a noted researcher on Jewish life in early Detroit and the son of the pioneer Jew Emil Heineman, who emigrated to the U.S. from Germany in 1851. Emil Heineman was known for his business engagements, his antique coin collection, and for owning the first billiard table in the territory, which Lewis Cass and Zachariah Chandler were said to enjoy.

David Heineman’s flag was not officially adopted by the City of Detroit until 1948. On April 20, 1972, Detroit celebrated “David E. Heineman day,” recognizing the contributions to Detroit’s governance, cultural life, and — through the flag — our sense of who we are. We should do that again sometime. 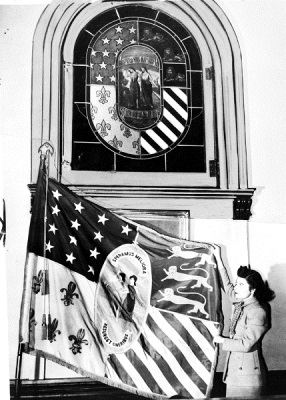 The city flag, in old City Hall, April 19, 1948. The stained glass in the rostrum is now at the Detroit Historical Museum. Source: Virtual Motor City.

More on David Heineman in this June 1972 issue of Michigan Jewish History. (Opens in a PDF.)