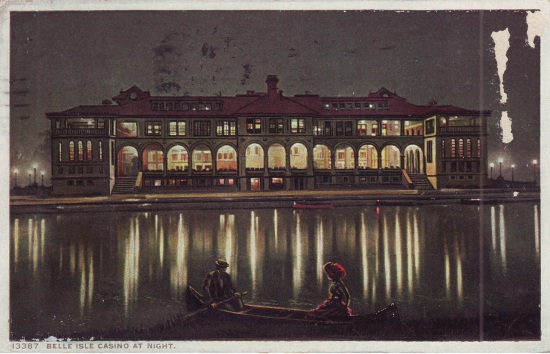 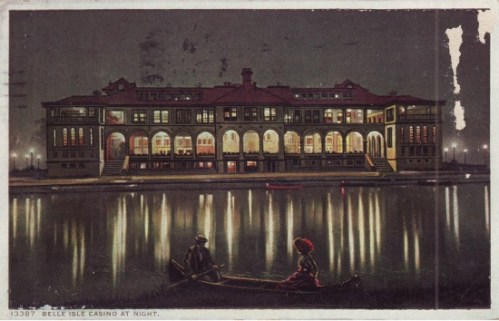 Via Postcards From Detroit

This is the second, final, and much longer post in a two-part series about Detroit’s purchase of Belle Isle. Here’s part one.

Five years after the Mayor’s final refusal to sign the park bonds in 1874, the Park Question rose from the ashes.

As Detroit discussed digging a railroad tunnel underneath the Detroit River so trains could run to Canada, Robert E. Roberts suggested in an 1874 newspaper editorial that the city could build a railroad bridge across the River to Belle Isle, then continue the track via underground tunnel the rest of the way to Canada. I don’t know enough about railroads to understand the logic of this plan, which was not pursued. (Wrote Clarence M. Burton of the Belle Isle railroad bridge plan: “The matter did not take shape, though it was supposed the city would fall into immediate ruin unless the tunnel was built instantly.”)

But the railroad bridge was part of what made the purchase of Belle Isle intriguing when it came up a few years later, in 1879, after state senator Eber W. Cottrell introduced a bill for the creation of a boulevard in Detroit — which also included, sneakily, a clause for the purchase of a park. On Belle Isle.

Belle Isle was privately owned in 1879, as it had been since June 5, 1768, when Lieutenant George McDougall (with the blessing of King George III) purchased the island from local Ottowa and Ojibwa chiefs for, famously, five barrels of rum, three rolls of tobacco, three pounds of vermilion and a wampum belt. The McDougalls sold the island to the Macomb family (they also owned Grosse Ile! Own all the islands!) in 1793, and the Macomb family sold the island to Barnabas Campau in 1817. Descendants of Barney Campau lived and operated fisheries on the island until its sale to the city. But people continued to use the island more or less publicly, to picnic, wander, resort, and to fight duels. (One of these things is not like the other?)

The first French settlers had used the island as a commons and a pasturing ground for their livestock, and they called the place Ile aux Cochons — Hog Island. There’s a story — I’ve told as gospel lots of times — that the settlers brought the hogs there to fend off a rattlesnake infestation, a legend Clarence Burton called “preposterous.”

The name “Belle Isle” seems to have been arrived at during a public gathering on the island in 1845, where people decided, I don’t know, that Hog Island wasn’t a very nice name? The island was pretty, and pretty ladies were always hanging out there, so they chose “Belle Isle,” which is kind of self-explanatory. (One disgruntled woman claimed that they should have kept the original name, because husbands were always going there without their wives.)

Back to the proposal: The news about Eber Cottrell’s recommendation in Lansing spread quickly. Reported the Evening News on Feb. 28, 1879:

If as reported at Lansing, the city of Detroit can obtain the fee of Belle Isle for $180,000, we believe that it could not do better than to purchase it. The sum is a very small one indeed compared with the benefits that could be derived from it in time. … We are among those who believe Detroit has a future, and that it will need the improvements and means of health and civilization which other cities enjoy, and among them a park. It would be impossible to locate one in a more beautiful place than this island.”

Influential and wealthy Detroiters — as they notably had not in 1873 — mobilized behind the plan, perhaps figuring that it was just a good idea to own Belle Isle, be it for the purpose of a railroad bridge or a park or both. In April, a group of men led by Levi L. Barbour (the wheeling gazelle in front of the Belle Isle Conservatory honors his memory) and William Moran secured agreements from everyone who owned land on Belle Isle to sell to the city. In May, the Park Act authorizing Detroit’s purchase of the island passed the state Senate. (Again, there’s no “home rule” until 1909, which is why, as Stephen Henderson points out in a recent Free Press op ed, it was the state of Michigan that gave Detroit the go-ahead to purchase Belle Isle in the first place.)  It was a shockingly quick decision, considering — and perhaps so as not to repeat — the gridlock that had seized Detroit during the Park Question of 1871-1873.

Which is not to say Belle Isle was without its opponents. One prominent detractor was the railroad baron James F. Joy, who wrote editorial after cranky editorial claiming, among many other grievances, that the Legislature and the press had exaggerated the level of public support for the Belle Isle project; that Belle Isle was too far away from the city to be available to most residents; that members of the Park Board stood to gain financially from the sale of the island; that the railroad bridge was a fraud meant to gin up anxiety and urgency; that there would be no public vote on Belle Isle; that the land was swampy, the fisheries decrepit, and the prospects for beautification dismal; and, of course, that it was all too expensive:

It produces little or no revenue. It never has been made available for any useful purpose and is not likely to be. And a park out there is the most useless of all purposes. Am I wrong, then, in saying that the price to be paid for it is enormous? Is it not three, four, five, or six times as much as it is worth? (Detroit Free Press, June 22, 1879)

An entertaining Free Press rebuttal called Joy an “old fogie” who just needed to get out of the way.

Here’s another protest from a July 4, 1879 pamphlet reproduced in a 1920 issue of the Detroit Public Library’s Library Service:

Would anyone go to Belle Isle?

Can the people pay the costs of going to and from Belle Isle? No! People who must walk miles to save five cents cannot pay from 30 to 50 cents for cars, ferries, etc. for selves and children in order to go to a park. This needs no further proof.

The laboring classes will never make use of Belle Isle. All the week they are employed at work or looking for work. On Sundays they are too poor to pay car fares, etc., too tired to walk around in the scorching sun, consequently they make Sunday what it should be, a day of rest in their own homes or those of their neighbors. It is only for a few months use of the park each summer, that the $200,000 is to be extracted from the sweat of the laborer. In Winter the park will of course be out of question. In Summer it is too hot; we cannot then use it on account of our poverty and inability to pay the cost of getting there and back.

But for the most part, people did want it — as evidenced by the thousands of signatures in support of the Belle Isle deal submitted by aldermen on the Common Council in the spring of 1879 (versus the hundreds submitted against its purchase). It took some time to settle the deeds and do legal stuff (boring!), but the purchase was more or less official by September. One firm congratulated the Common Council thusly:

As you have finished the purchase of Belle Isle for the city park, we cordially invite you and your friends to partake of a roasted ox. On any date you may appoint we will be happy to see you.

But it was so not over yet. After all, people who were still unhappy with the purchase figured the city could just sell the island back, which is what one Alderman, a Mr. Warriner, proposed in a resolution to the Common Council in 1880:

It is well known that this scheme was conceived in sin and brought forth in iniquity. We have had one year of it, and can see what a precious time we will have if the city is to keep it.

That resolution wasn’t considered, but you know who else thought it was a good idea? The Mayor who had just purchased Belle Isle. Whyyyyyyyyy?

George C. Langdon was no longer the mayor, but among his last acts as mayor was the appointment of a commission to oversee Belle Isle. The new mayor, William Thompson, refused to work with Langdon’s commission, and instructed the Board of Estimates to delay improvements of the island until a new commission could be appointed. BUT! The Common Council President, Charles Ewers, had friends on the Langdon Commission, and while Mayor Thompson was away on business in Chicago, Alderman Ewers — as acting mayor — passed a resolution handing over Belle Isle to the Langdon Commission.

Did you just gasp a little? I DID.

Mayor Thompson received notice of the scandalous vote via telegram, came back to Detroit post haste, and vetoed the resolution, but because it had been passed by the acting mayor and that was confusing, the veto had to go to the Michigan Supreme Court. Former Mayor Langdon was so fed up that he thought maybe it would be better if the city would just sell the island:

It had better be sold … unless the municipal government can be placed in the power of men whose souls are large enough, whose ideas are broad enough, and whose principals are strong and honest enough to entirely ignore their personal grievances in the interests and for the improvement of the property of the city, and who are sufficiently considerate to show some regard for the welfare and health of the citizens.

It took until 1881 for the Supreme Court to resolve Mayor Thompson’s veto. In July, the Mayor was finally able to appoint his own commission, and plans for a park on Belle Isle were finally, for real, no seriously, underway.

Like I said in my first post, the cabinet drama / municipal bond-iness of the Belle Isle purchase is tedious. But I think it is important for us to think about today.

It’s not because the Park Question is “all too familiar” to what we are struggling through with Belle Isle today, or that “the more things change,” et cetera. I’m not even sure there are clear parallels between the city’s purchase of a private island to make a park out of it and the recent attempt by the state of Michigan to broker a deal with the council to lease the island as a state park.

But I think it’s worth remembering that it is hard, loud, fighting work to make a city. That this work is constant and never goes away.

That there may be no right answer, and even if there is, it’s more important to build consensus for a workable solution than to pursue the perfect fix.

That big decisions and best-laid plans could take ten years, or more, to bear fruit. And that even if it seems painful and discouraging to do the work now, someone could thank you for it in 100 years. And may also laugh at you. Don’t take it too personally.

See you on Belle Isle,