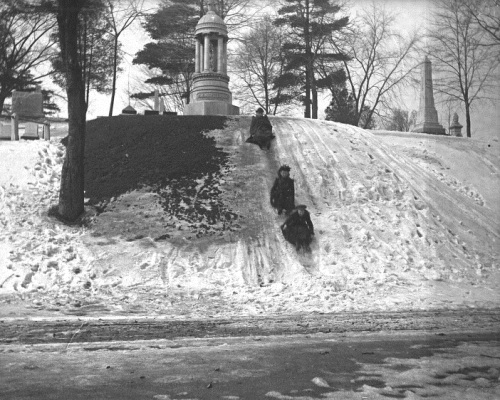 Adorable memento mori! And/or something about the circle of life! I love this very much, is all.

The domed monument at the top of the hill is that of Halmor Hull Emmons, a railroad lawyer who made bundles of money in the 1850s, then became a U.S. Circuit Judge. He lived in Ecorse. Take it away Friend Palmer:

A large share of the community wondered why Hal Emmons located down at the Ecorse, and why he spent so much money on that swamp of a place. What a world of evergreens and other fine trees and flowering shrubs he planted there. When he was holding court, he was quite a picturesque character, mounted on his horse, with his saddle bags behind him, going to and from his farm in Ecorse. It reminded one of the itinerant Methodist preacher, who in the earlier days rode his circuit on horseback with his saddle bags behind him, and also the doctor of those days, visiting his patients by the same means, up and down the river …

In his book about the early bench and bar in Detroit, Robert B. Ross describes Emmons as “one of the brightest and brainiest of the galaxy of Detroit lawyers in the [18]40s” but also “impulsive in manner and excitable in speech,” and in “vituperative profanity,” “he excelled any other Michigan lawyer, living or dead.”

Photo from the Burton Historical Collection.