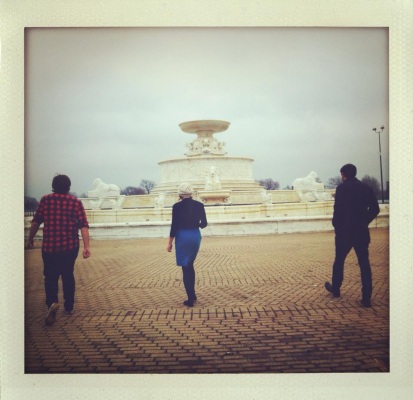 2012 in review + State of the nerdy local history blog

It was the year of the Detroit Drunken Historical Society — the long-awaited actualization of a charter drawn up on a cocktail napkin years ago, on a summer afternoon that involved too many whiskey shots at the Bronx. 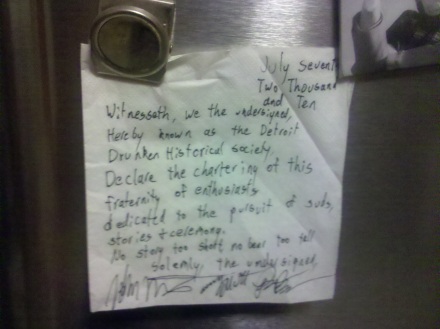 Witnesseth: We the undersigned, hereby known as the Detroit Drunken Historical Society, Declare the chartering of this fraternity of enthusiasts, dedicated to the pursuit of suds, stories and ceremony. No story too short, no beer too tall.

Together, this year, we learned about Gabriel Richard, the history of the labor movement, Motown, turtle soup, the Underground Railroad, the role of alcohol in the War of 1812. We went on bike rides, and bar crawls, and started a book club.

Central to my experience of Detroit history has been the nagging question: Do I actually know anything about any of this? And does anyone actually want to hear me talk about it? But the bus tours gave me a chance to do what I love best, what this blog has been for years: a chance to make friends, tell funny stories, look at old things in new (which sometimes means old) ways, and take the back alleys toward understanding our city’s past. And of course go to the bar. Because history is fun.

Me, my buddies from the Detroit Bus Company, & the James Scott Fountain on Belle Isle. Photo by Lisa Waud.

It has also been, for me, the year of the full-time job, the first such job I have had in years, which I started in March. As a creative-type writer-y media-world young person who has always wanted to work-to-live, not live-to-work (or more accurately, work-to-work-on-other-stuff-that-doesn’t-pay-well-or-at-all-for-instance-local-history-possibly-also-media), my career has always been a moving target. This year, in an unexpected turn of events, I started to nail it. So in 2012, a lot of my heart and energy went toward my real-life job.

All of this is just to say why it hasn’t, so much, been the year of the blog post. (Another reason; It has been the year of using platforms like Facebook, Twitter, and Instagram to share things when I’m not sure I need to spend hours and hours working on a post.) When I met writer David Sax (formerly of the blog Save The Deli and author of the book of the same name) last year, he asked if I was keeping the blog up. I said yes, that it had been two years, and I was still excited to work on it every day. He said, Give it four years. And this year we are rounding the bend into year four of THE NIGHT TRAIN.

I can’t promise 2013 won’t be the year that I mothball this place and move on to other projects. But on the edge of a brave new year, I hope that won’t happen. Like a camera (even that dumb one in my phone that’s usually in front of my face no matter how hard I try to put it down and pay attention with my goddamn eyes), the blog has helped remind me to be constantly adjusting my view, to seek out new opportunities and angles, give me an excuse to be curious, approach people I wouldn’t have the nerve to say hello to otherwise (even if those people are mostly dead).

Where to in 2013? Off the top of my head: Grosse Ile, every cemetery in Detroit, Conner Creek, Southwest Detroit, finally (finally!) Windsor, and maybe even (also finally!) the Upper Peninsula. Probably some familiar places, too. And maybe you’ll come say hello to me at drunk history, on a bus tour, a cemetery tour, or a visit to the log cabin in Palmer Park. But just to give us a jump-start, and to refresh my commitment to the blog, I’ll be introducing you to a few people I met in 2012 (all dead) in a blitz of year-end and year-beginning posts.

The history of the Belle Isle Aquarium, which re-opened this year

Cyclorama painting in Detroit, Parts I and II

Meditations on a boat club