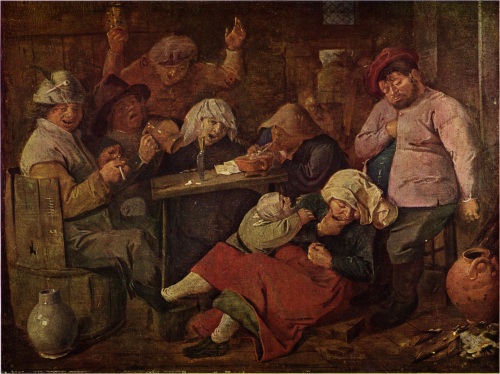 The homeliest woman out west

Hey. I’ve got someone for you to meet.

Her name is Mother Handsome.

“Near the end of this newly-built turnpike, and close beside it, was an apology for a hotel, built of logs, and kept by an old lady known throughout the country by the title of ‘Mother Handsome,'” wrote the Reverend Riley Crawford, remembering his journey up the Saginaw turnpike in the spring of 1825. (“It was hard to tell where the mud was deepest, on the pike or in the ditches.”)

Here we stopped for refreshments; and as I looked upon the face of the homeliest woman I had ever seen, I wondered why they gave her such a beautiful name. This old lady had a peculiar nasal twang when she spoke, which was not easily forgotten by a boy of my disposition, especially when her conversation was directed to me.

Out on this road, near Royal Oak, lived quite a noted character, known to all the country round about, “Mother Handsome” she was called, and she kept a road house. I often saw her and I think she was the homeliest woman I ever looked upon.

Mary Ann Chappell had been a camp follower during the War of 1812, or so it was rumored. Rough and moody, with a face scarred from smallpox, Mother Handsome moved her establishment around a lot along what is now the Woodward Corridor, from just a few miles outside the city in the early days of westward expansion to a log cabin in Royal Oak in the 1820s to a frame house — among the area’s first — in what is now Ferndale in 1833. Travelers went out of their way to stay with Mother Handsome, who, though famously rowdy and undeniably ugly, was said to have better food — and booze — for lower prices than other taverns along the route.

Wrote Friend, relating a story told to him by A.C. McGraw:

When they arrived at the cabin, she stood in the door with a broom in her hand. My father was naturally polite and, hurrying up to her, said: “Mrs. Handsome, you don’t know how glad we are to see you.” “Damn you,” she said, “if you call me Mother Handsome again, I will break the broomstick over your head.”

Another visitor from Boston had begged to be taken to see her, “saying he’d heard so many from the east speak of the lady as so good looking … He wished to return home saying I too have seen this western beauty.” (Sarah E. Soper, “Reminiscence of Pioneer Life in Oakland County,” Michigan Pioneer and Historical Collections, 1898.)

Upon his arrival in Royal Oak:

Meaning not to be outdone, he immediately advanced with outstretched hand, at the same time exclaiming, “How do you do, Miss Handsome!” while Mr. Hadsell, completely convulsed with laughter inside, was doing his best to make peace between them, as she was, instead of shaking hands with her guest, shaking her broom stick … asking what he meant thus to insult her, by calling her such names? Saying “I’ll learn you a lesson, sir; if you are from Boston.”

Who will open a Ferndale inn with me in tribute to MOTHER HANDSOME? I have the perfect name for it.

We’ll call it MOTHER HANDSOME’S. Eat your heart out, One Eyed Betty’s.