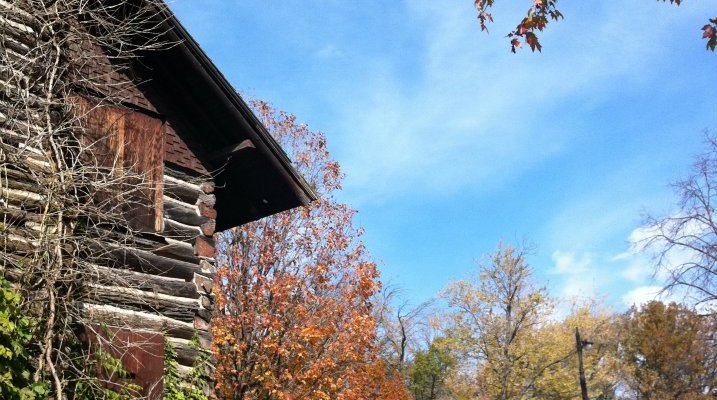 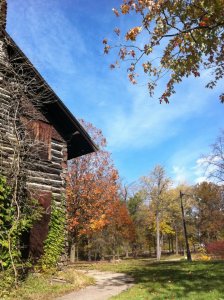 It’s fall! Things are changing! The leaves, especially spectacular this year; your desire to eat cider donuts (up at least 25% from 30 days ago); the number of sweaters you fuss with throughout the day (if you’re like me, you’re currently stuck in a cycle of putting on a sweater, getting too hot, taking it off in one room, forgetting where you put it, putting on a different sweater when you get cold again in another room, leaving that sweater in your car, or your bag, or in a restaurant, etc., leading to the impression that you are low on sweaters when in fact you have plenty of sweaters; buying new sweaters; losing those sweaters; so on.).

“I wonder if a man ever gets too old to enjoy a bonfire — to gloat and exult over one of them with a sort of childish glee, I am sure I shall never grow too old for this sort of enjoyment. Avoid a man who takes no interest in bonfires as you would a contagion.”

… and his wife Lizzie Merrill Palmer, daughter of a lumber baron, philanthropist founder of the Merrill-Palmer Academy, also a bonfire lover — had been closed since 1979. Trails through the woods were overgrown, its structures deteriorating. The park as a whole gave off kind of a creepy vagrant vibe.

Now, thanks to the patient, creative, and enthusiastic stewardship of People for Palmer Park, it’s a different story. There are orchards, a nod to the past — Thomas Palmer’s own orchards, and the wild fruit groves that once grew throughout the Territory — and a handshake with the future, a Detroit where grow-your-own is the word of the day. There are bike rides, yoga classes, tennis lessons, storytelling days for kids, a garden club, and good old fashioned “people walking around.”

And the cabin! The cabin has twice this year been open for visitors, on Log Cabin Day in June and again last month for a gala. 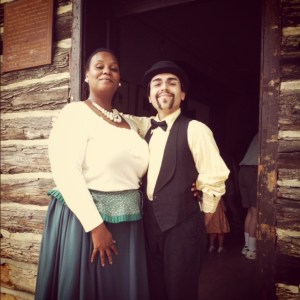 And this weekend! IT WILL BE OPEN AGAIN!

The second-annual Palmer Park Architecture Tour is this Saturday Oct. 6. Walking tours start at 11 am and depart every 15 minutes until 3 pm. You can buy tickets now or when you check-in at the Detroit Unity Temple (but it’s a good idea to check the schedule before you go and see what’s sold out!).

Yours truly will be showing off the cabin until the early afternoon, but the best part of the architecture tour is the Palmer Park Historic Apartment District, which block for block is crammed with head-spinning fancies of Moorish, Egyptian, Venetian, and Spanish design, plus some handsome Deco and art-moderne gems, plus a former Jewish synagogue, one or two beautiful churches, and (you know it) an Albert Kahn, commissioned by Walter O. Briggs for factory employees & their families. 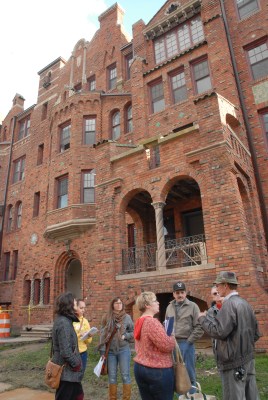 [Photo by Barbara Barefield via peopleforpalmerpark.org]

This year, with even more apartment buildings under renovation, the tour even features some insider peeks: a condo at the WalBri (that’s the Kahn), the lobby of the Luxor and an apartment in the recently-rehabbed La Vogue. (LA VOGUE!)

If you can’t make it, but still want to help Palmer Park, you might consider contributing a few online votes for Palmer Park to win $50,000 to completely restore its hiking and biking trails. The Park is representing Michigan in Tom’s of Maine’s 50 States for Good drive, and you can vote daily through Oct. 9.