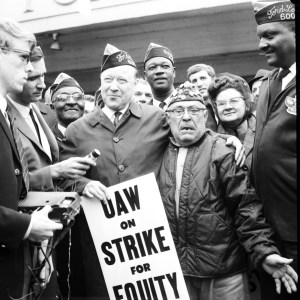 Walter Reuther at a UAW strike, 1967. Via Virtual Motor City.

I’m embarrassed to admit this, but it’s true: My love affair with Detroit’s oft-forgotten pre-automotive past has left sweeping chapters of the city’s automotive and post-automotive (that a thing yet?) storybook sort of hazy to me. After the timeline ticks in at around 1901, I start to fade. I cannot keep the dynasty families (Fords, Dodges, Chryslers, Olds) straight, and I always mix up where their mansions are. I’m sorry but I cannot tell you where Fred Sonic Smith’s grave is in Elmwood even though I know it’s there. And although I realize what a huge impact Detroit has had on the history of organized labor, from the turn of the century to TODAY, I really can’t tell you square one about it.

So I decided to fix the gaps in my understanding the best way I know: Over drinks. Tomorrow (that’s Thursday night, Aug. 30) at the Lager House, the Detroit Drunken Historical Society welcomes Tony Paris of the Sugar Law Center to drink a bunch of beers, then walk us through the labor movement from its beginnings during the Depression to its radical re-imagining during the 1960s. We’ll talk about Walter Reuther, the Ford Hunger March and the Red Scare. Tony will even sing some Maurice Sugar songs. We are going to GET CRAZY and LEARN SO MUCH!

Hope you can join us tomorrow at the Lager House — come early for po’ boys and deep fried pickles. As always, more info on the Detroit Drunken Historical Society (including next month’s event with Funk Brother Dennis Coffey — !) on Facebook and Meetup.