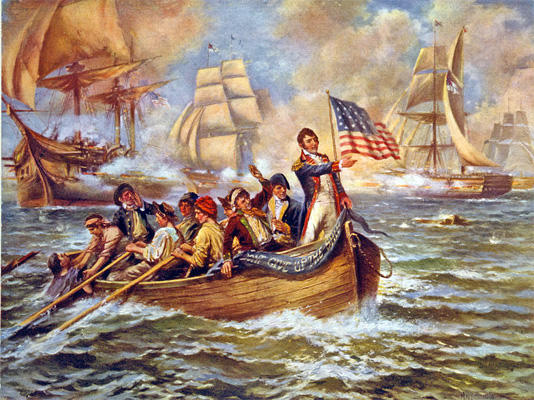 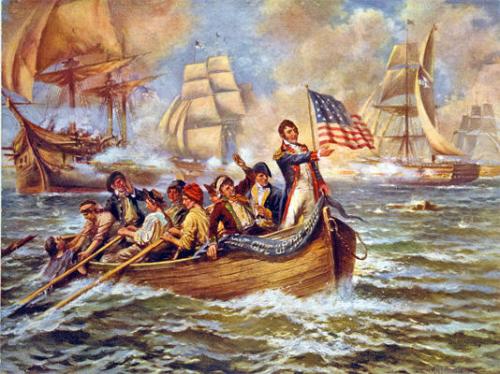 What happened during the War of 1812?

Let’s be fair: Most of us don’t know.

It was a weird, wonky war, declared for reasons unclear: something about sailors? Something about trade law? Something about the Indians?  Canada was involved?  We had an effete President in office and a bunch of aging war heroes in Congress who wanted to prove our national honor on a global stage — something like that, right?

And what came of it? We got Andrew Jackson, for better or worse, and William Henry Harrison, who went on to serve the shortest Presidential term in American history. We got “Don’t Give Up The Ship” and the Star-Spangled Banner. We got a fledgling Navy.

And we lost Detroit. But then we got it back.

It has been reported that Americans don’t care about the War of 1812, even in its bicentennial year.

But Detroiters! Detroiters, we should care. Even if it is painful to be remembered as the site of craven surrender rather than banner victory. Even though the War of 1812 was equal measures amusingly clumsy (heroic efforts thwarted more than once by the slow pace of mail delivery!) and bloodily tragic (hey, remember how the Northwest Territory could have been a sovereign Indian nation? Yeah.). Even though it is hard to understand why the war happened and who won (definitive answer: Not the Indians).

Here are a few reasons why it’s still good to know your War of 1812 stuff:

It was the only time in Michigan’s history that Michigan was a war front. I am pretty sure that we went on a field trip to the River Raisin Battlefield when I was in elementary school. I’m also pretty sure that I had no idea what battle was fought there or why. Later I would remember it as a Civil War site, but of course that is impossible.

Not to cop to any Midwestern feelings of inferiority, but most of our country’s defining moments — especially before the 20th century — happened far away from here. The attempted invasion of Canada and the struggle to secure control of the Great Lakes (with big, blustery naval battles! ON THE GREAT LAKES!) are dramatic exceptions worth commemorating.

Besides, the War of 1812 was not just fought from Michigan — you could build a case that the war was fought for Michigan, to retain control of the Northwest and flush the region of ongoing British presence and influence. Good to know.

The War of 1812 created infrastructure. There were no roads leading to or from Detroit before the War of 1812, but troops and supplies had to get around somehow.  So trees were felled, planks laid, and overland routes carved (albeit hastily, and barely) from the woods, groves and swamps of the Michigan Territory. After the war, those roads were used to lead settlers into the wilds to forge new homes, farms, and frontiers.

A portion of one of those roads, Hull’s Trace, still exists in Brownstown, near Lake Erie.

The War of 1812 brought newcomers to Michigan. In some cases, notable newcomers. Like Lewis Cass, the young lawyer and militiaman from Ohio who, at word of war, closed up his practice and marched his Company to Detroit. In 1813, as a reward for his service (and maybe as consolation for bearing the insult of surrendered Detroit), President Madison made him Governor of the Michigan Territory, a position he held until 1831.

And what of all the volunteers from Ohio, Indiana and Kentucky and wherever else who came here to fight and saw the fruit trees and the charming French family farms and the river and the potential and thought: Hey! Detroit! I could make it here.

Canadian history is American history, too. We live so close to Canada and we kind of have no idea what went on over there. The Patriot War? Was that a thing? But after the War of 1812 was over, Detroiters and Canadians threw a Grand Pacification Ball (there will be a bicentennial of the Grand Pacification Ball in 2015 — mark your calendars!) to show the world that there were no hard feelings and we would all be good friends going forward. And for 200 years (OK, 199, if you count from the time we re-gained Detroit in 1813) we have shared our peace.

To celebrate all things Detroit and the War of 1812, the Detroit Drunken Historical Society hosts our monthly meeting at the Anchor Bar — just across the street from the original boundary of Fort Detroit at Cass and Fort streets — tonight, Thursday, June 21, at 7:00 pm. A panel of Society members have been studying up to present a lightning-round summary of the events of the War of 1812. And to cap the evening, we’ve invited a special guest from the CBC (currently producing a documentary about the War of 1812) to talk about the War from a Canadian perspective and to invite discussion on the question: Did Canada win Detroit by cheating?

Hope to see you tonight! For more information about DDHS, join us on Facebook and Meetup.