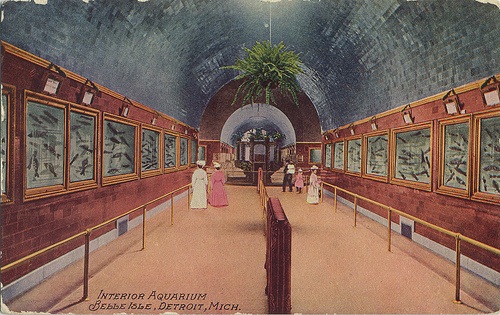 In our first entry for Fish Week (!), we wrote about whitefish, and the role they played in Detroit’s cultural, culinary and economic history. And we shared a brief history of the State Fish Commission, established in 1873 to help replenish the whitefish population after decades of overfishing and environmental degradation.

The quest to keep Detroit’s whitefish alive and happily propagating was a practical part of the 1899 proposal to build a world-class aquarium on Belle Isle.

Of course, there was a city-of-the-world side of things, too. The great capitals of Europe all had public aquariums (the first one opened in London in 1853), as did New York and Washington. Representative David Heineman introduced his bill to build one in Detroit after he visited the aquarium in Naples, Italy.

But the Fish Commission hoped that an aquarium would also provide good reason for the Detroit River hatchery to move to Belle Isle, and in addition create a kind of “fish museum” there, where the public could become more aware of the Commission’s important work as they visited exhibits stocked with “nets of every description, hooks of all sorts and sizes, rods, lines and stuffed specimens of Michigan fish, as well as those of other waters the world over”:

Although the people of the state have always been welcome to visit the offices, as well as the hatcheries operated by the [State Fish] Commission, it is a fact that not so many have availed themselves of the privilege as the commission would like to see interested in the work. Having this in mind, the commissioners determined to get into somewhat larger quarters and make them interesting to the people. … In short, the nucleus will soon be started of a marine museum, which, if the aquarium is ever built on Belle Isle, will be of great value.

A MICHIGAN FISH MUSEUM: State Fish Commissioners are Working Toward It. Would like an Aquarium on Belle Isle. Detroit Free Press, April 9, 1899 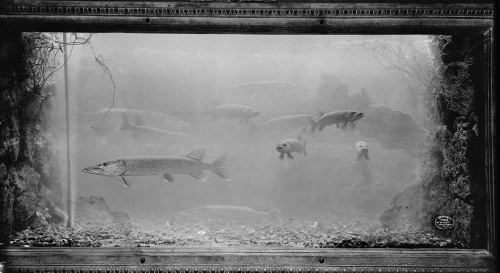 Indeed, some of the first fish in the Aquarium were collected as part of a hatchery project:

For some weeks, the U.S. Fish Commission has had men at the island endeavoring to secure a supply of whitefish for spawning purposes. Thus far their efforts have met with little success so far as the whitefish are concerned, but every haul of the nets has brought in an assortment of other varieties. Commissioner Bolger has taken advantage of this fact to secure specimens, which have been conveyed to the aquarium and placed in the large pools pending the completion of the glass tanks which will form their future home.

When the Aquarium opened, it was one of the largest and most modern in the world. In Detroit, it was an instant success. On its grand opening day — August 18, 1904 — it welcomed 5,000 visitors. Ten days earlier, on what must have been an especially gorgeous summer Sunday, twice that many people came through its doors.

Over the years the Belle Isle Aquarium gained a reputation as the world’s premiere collection of freshwater fish. But the Aquarium exhibited saltwater fish as well — which, for an aquarium nowhere near the sea, was a feat and a marvel.

The Belle Isle Aquarium’s first Director, R.J. Conway, came from the New York Aquarium, and he brought an ambitious and cosmopolitan vision to Detroit. Under his tenure the Belle Isle Aquarium collected the exotic and the odd: an albino trout; a “Hellbender” Allegheny salamander; sea lions from the Pacific coat; tropical fish from Bermuda; a poisonous seven-foot moray named Geraldine that slipped loose from its pen and flopped around on the rail car floor for 20 harrowing minutes, reported the Free Press in 1909. And, famously, an alligator, which made its home in a recessed pond in the Aquarium’s rotunda.

“His alligatorship is eight feet in length and of due proportions,” wrote Pruella (!) Janet Sherman for World Today in 1904. “It is hoped that he will be able to forget his native southern waters and take to civilization without argument.””

Where did all of these fish come from? They came from the ocean! And Conway, like some sort of ocean cowboy, personally journeyed to the Atlantic coast, where he set out at dawn on deep-sea fishing boats or waded through New Jersey marshes, swatting mosquitoes and combing the muck for specimens. The fish were shipped home by rail in what amounted to tin cans, which sometimes had to be staffed around-the-clock with a helper to aerate the water by hand. The saltwater, too, was shipped back to Detroit (from the ocean!), where it was recycled by pump through the Aquarium’s tanks. (Many of the Aquarium’s saltwater fish, it should be noted, were acquired less adventurously by swaps with other aquariums, especially Conway’s former employer in NYC.)

Conway frequently had to answer calls that his expeditions were costing the city too much money, but he claimed no extravagance — only that city officials knew nothing about caring for fish. (Eventually saltwater fish did prove too expensive, and they were removed during the Depression, reports HistoricDetroit.org — although some saltwater fish returned after the 1954 renovation.) 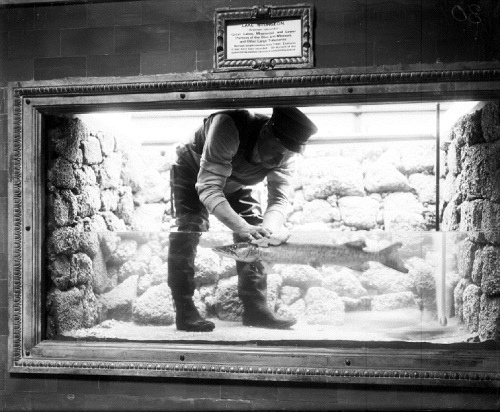 Is it better to have loved, lost, and perhaps victoriously re-opened a public aquarium than to never have had a public aquarium to love? The Belle Isle Aquarium closed in 2005, and volunteers have been hard at work to re-open it pretty much ever since. (This video from the Free Press about the volunteer effort to bring back the Belle Isle Aquarium is so heartwarming! Watch it!)

We have a feeling they are getting very close. If you’d like to see some happy fish on your favorite island park in the near future, you can donate to the Belle Isle Aquarium online or send a check to the Belle Isle Conservancy, attn: Aquarium Fund.

For more history on the Aquarium, especially the stunning building, you can’t beat HistoricDetroit.org.