Fish might not be the first thing you think of when you think of Detroit. Unless you’re an ardent urban fisher, they may not even crack the top 10. Sure, you can tell the story of Detroit without fish (something about France! something about cars! something about Stevie Wonder!). But why would you want to? From the kitchen tables of early settlers to the lavish dining rooms of industrial Detroit to the sparkling green halls of the country’s oldest public aquarium, fish reveal lot about how we’ve lived in this river town.

And so, on a whim, I’m declaring it: FISH WEEK!

Over the next few days we’ll talk about shad and sturgeon, pike and pickerel, carp and those who carped about carp. We’ll talk about hatcheries in the heart of the city and how our relationship with fish through history could inform Detroit’s future.

Today, we begin with the most influential Great Lakes fish of them all — the humble whitefish.

“This fish is a subject so dainty and white
To show in a lecture, to eat or to write,
That equals my joy; I declare on my life,
To raise up my voice or to raise up my knife,
‘Tis a morsel alike for the gormand or faster;
White, white as a tablet of pure alabaster,
Its beauty and flavor no person can doubt
When seen in the water or tasted without;
And all the dispute that opinions ere makes
Of this king of lake fishes, this deer of the lakes,
Regards not its choiceness, to ponder or sup,
But the best mode of dressing or serving it up.”

(Excerpted from this very long, but very delightful, ode to the whitefish)

Detroiters have been dining on whitefish since before they were Detroiters. To read the accounts of settlers recalling the rosy early days, whitefish were so abundant in the cold, fresh water of the strait that you could just grab a net, wade out, and help yourself.  Antoine Cadillac observed local Indians dragging scoop nets for whitefish; their recipe called for boiling them in maple syrup,  according to Silas Farmer. “Fish bones and scales would sometimes stare up at you from the bottom of the coffee cup,” he wrote.

By the time settlers from the East began arriving in Detroit in the 1820s, whitefish had become something of a cottage industry. General Friend Palmer remembers going on fish-buying errands to the riverfront when he was just a boy:

“In the early thirties … you could then buy, any morning in the season, at any of the markets and from the canoes of the French habitants at the foot of Woodward Avenue fine fish fresh, as many as you desired, for five cents each, and at any of the fishing grounds along the river you could have as many as you could carry away conveniently, for free. … So plentiful were they that scarcely a household in the city but what had them on their tables if they so desired.”

An average of 3500 barrels of whitefish per year were caught in the Detroit River between 1836 and 1840, at a going rate of about $8 a barrel. Detroit River whitefish were said to be juicier and more flavorful than in the upper Great Lakes, and they were packed fresh, smoked, or — by the 1870s — frozen, and shipped to Ohio and New York. 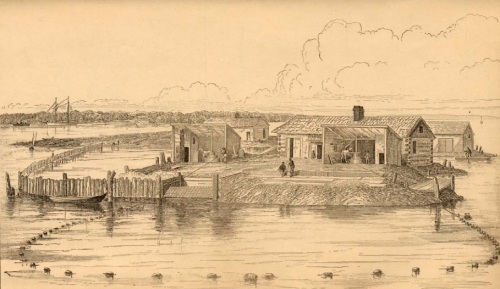 You see where this is going: by the 1870s, whitefish were in trouble, due to overfishing, coupled with the environmental degradation wrought by logging, damming, and other results of rapid industrial growth.

“It is quite evident, if the present mode of destroying both old and young is continued, the whitefish will soon become extinct. Judging from my experience in fishing, there is not fifteen percent of the number of fish now ascending the Detroit river as in 1829,” wrote George R. Clark, a commercial fisher from Ecorse, in 1876.

The hauls of fish were so great, and so important to Michigan’s growing economy — in 1872, Detroit ranked second only to Chicago in its output whitefish and herring, with Detroit’s catch weighing in at 3.4 million pounds — that in 1873, the state established a Fish Commission to prevent the total extinction of fish populations.  That year, the state’s first commercial hatchery, operated by Nelson W. Clark, propagated about 1.5 million whitefish.

The lake whitefish survived. Throughout the Great Lakes, whitefish remain a culinary and cultural staple, a reminder of our water-locked lives. Menus from Detroit’s gilded age, like this 1900 Christmas dinner from the Russell House, often feature a simple planked Detroit river whitefish as a prideful hark to our local history.

Here’s a recipe, only slightly adapted for modern conventions (i.e. how hot, exactly, is a “hot oven”?) from 1896. Bon appetit!

Preheat oven to 350 degrees. (You can also do this on the grill!)

Clean and split a three-pound fish. Place skin-side down on an oak plank one inch thick, and a little longer and wider than the fish (I’ve heard untreated cedar roofing shingles work well, too —NTD). Sprinkle with salt and pepper and brush with melted butter.

Bake 25 minutes. Remove from oven, garnish with parsley and lemon, and serve right on the plank.

Lake whitefish and lake herring fisheries in the Detroit river, a history by the USGS Great Lakes Science Center

Next up for fish week: Where did the Belle Isle Aquarium get its fish?