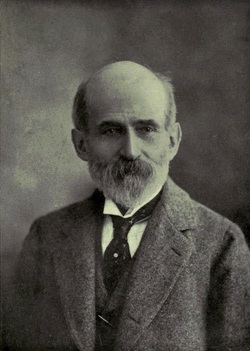 Happy birthday to this guy

Friend Palmer was born May 7, 1820 in Canandaigua, New York. He came to Detroit with his family on the steamer Henry Clay when he was seven years old.

Could he ever have guessed that nearly 200 years after his birth he’d be the #1 collaborator / contributor to some lady’s dweeby early history blog?

I wish he were still alive so I could throw him a party even better than this one he attended at the Exchange Hotel in 1850:

It was a brilliant affair, and was attended by the elite of the city, military and all, the latter in full uniform. A short time before issuing the invitations he told the boys he intended giving a dancing party, and charged them all to be on hand as it was going to be a stunner. Well, it came off in good time, and it was a sure enough stunner. I have attended many functions of this kind in my time, and think this affair “took the cake.” The supper room, located in the upper part of the house, was open from the beginning of the party until its close.  Whisky in the gentlemen’s dressing room, and champagne in the supper room; the latter flowed like water. It is a wonder the whole male portion did not get tipsy, but they did not, except two or three. Most of the rest though, it must be confessed, became quite hilarious. Dancing to the music of Gilliam’s String Band was kept up until a late hour. Lyon said on the start that he was going to give the boys all the wine they could get away with, and a general good time. He did it. This “blow out” of his was the talk of the town for quite a while after it occurred.

Ah, the lost glory of the military ball, with influential officers drinking all of the champagne, bringing side arms, and tearing around obnoxiously in spurs:

The officers wore their side arms and spurs, as was the custom at the time. I seem now to hear, as I heard then, the rattling of their accoutrements and the jingling of their spurs, as they whirled through the mazes of the giddy dance. The custom of wearing the spurs on festive occasions was annoying to the ladies, as they made sad havoc with their dresses.

Some of my favorite Friend Palmer posts:

General Friend Palmer and fireballs in the street

General Friend Palmer and his scrapbooks