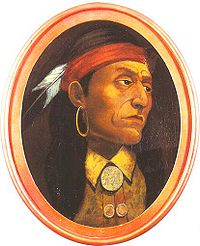 Last month’s inaugural event at St. Cece’s was full of the warmth of fellowship, learning, a fireplace, and many whiskey gingers. Tonight (that’s Wednesday, March 21), join us for another thrilling, cocktail-fueled installment of Detroit’s remarkable history as you’ve never heard it (or read about) before. Brian Mulloy of Michigan Essay (you may have heard him speak at TEDxDetroit last year) gives a talk about original Detroit badass Chief Pontiac, the siege of Detroit, and the Battle of Bloody Run.

Be there at 8:00 for mingling and drinks. Talk starts at 8:30. And join us on Facebook or Meetup for more details, future meeting notices, and maybe even a drink recipe or two.

It’s a little Mardi Gras, a lot of early Detroit spirit as once again we prepare to banish our little red devil beyond the stockade walls. I heard even Gabriel Richard will be around for this one. And I think I’m going to dress up as a steamboat captain. (It was from a steamboat, after all, that the first cholera patient leaped to the river and swam ashore, infecting the entire city with a plague that would kill a seventh of its population. Surely the Nain had a hand in it.)

Drink a bloody at the Bronx (or at the Cass Cafe, where they’ll serve it with a deviled egg.) Then join your fellow townsfolk at the corner of Second and Canfield and get this guy out of here.