The history of William Webb, composed by himself.

Happy Leap Year! I’m so glad to have one extra day this month because I needed one extra day to get my business together and write this post for you.

It’s still Black History Month, and I had plans to introduce you to five of my favorite Black Detroiters from the city’s pre-automotive history. But I got wrapped up in just one story, and since I’m of the mind that everyone would do better to celebrate Black History year-round with as much verve as they do in February, I’ll commit right here and now to sharing those stories with you very soon.

For now, though, I want to introduce you to William Webb. 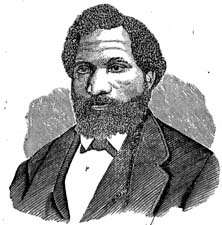 William Webb was born into slavery in Georgia in 1836. In Mississippi, in the years leading up to the Civil War, Webb became involved with a group of slaves secretly organizing for freedom, and at their meetings he called for the creation of an interstate network that could create an irresistible revolutionary movement:

“I told him all the way that could be done with justice would be to establish a king in every State, and let every king make his laws in his own State, and let his place be the headquarters. I thought it best for each king to appoint a man to travel twelve miles, and then hand the news to another man, and so on, till the news reached from Louisiana to Mississippi, and then if we were to rebel, we would rebel in all the States at one time, so the white people would not have a chance.”

That’s from The History of William Webb, Composed by Himself, published in Detroit in 1873 to raise money for education to teach William Webb — 52 years old, and still illiterate — to read and write. (His wife penned the book.)

When war broke out, Webb served as a spy in the Union Army. Captured by slaveholders, he escaped and enlisted in the Army, where he saw victory at the Battle of Fort Henry. Then he snuck onto a prisoner boat headed for Indianapolis: “For I had heard General Wallace talking about it being a free country.”

” … We landed in Indianapolis, Indiana, where the prisoners were going to, and every thing was prepared for us to take breakfast. We arrived there about seven o’clock in the morning. We all took breakfast and then prepared to march to camp Moulton. All the prisoners marched out, and the colored men along with them, but I remained in the depot. Then I walked out and said to myself, “thank God, I am free.” I heard a voice in my ear, say, not free yet; when you depart from sin, then you are free indeed.”

That fall, Webb came to Michigan, where he found work chopping wood for the winter five miles west of Detroit, near what is now Woodmere Cemetery. There, he witnessed people fleeing from the Riot of 1863:

“While I was out there a riot occurred in the city, and a great many colored people were fleeing out in the country where I was, and some came to the house where I was stopping to get shelter, both men and women. They said there was a great many bad feeling white people in the neighborhood, and they did not know whether they were safe themselves. … I came into the city next day to see what damage they had done. The colored people were very scarce in the places I had been used to see them, and I found that some had run over into Canada, and some of them had run into the woods. A great many gentlemen said it was a great pity they had such a cruel riot, and I asked them if there was no law to prevent such a mob, and they said there was no laws for a mob. I said, I think it is a very queer country that has no law to protect people.”

A queer country indeed, and Detroit knew it. As a result of the riot, the city organized its first police force.

I started reading this narrative because I wanted to know more about William Webb, the man who hosted the famous meeting between Frederick Douglass and John Brown in Detroit in 1859. This is a different William Webb — a William Webb still enslaved in 1859, praying and trusting to God that he would be delivered, and fearing no man. He did not have a home in which to host strategy sessions; when he came to Detroit, he lived in boarding houses.

This William Webb was arrested twice — once in Indiana, where it was a crime for a white man to hire a Southern black, and again in Detroit, after he refused to enlist in the army:

“They were very angry at me, and told me I had better be down freeing my people. I said to them, yes, I had been planning that, two or three years before the war broke out, and I thought I had given them a great deal of light. He was very angry when I told him that, and said that every colored man ought to take up arms and go into the field. I said to him, yes, I thought so too, if there was any chance of the rebels whipping the Union soldiers. … He asked me if I would enlist as a soldier. I said I did not think I would. I told him my mind taught me better, that I thought at some future day I might be of some great benefit. He asked me what benefit I expected to be. I told him I did not know, but I had great hope and trust in the future.”

Webb continued to chop wood, work in the fields, and paint fences, including for the Mayor (if I have my dates right, this would be Mayor William Duncan) who sounds like a real creep:

“I whitewashed for the mayor of the city that spring. We got into a little dispute about the work, and I talked to him with the best manners I could. He ran up to me and told me to hush, that he did not allow n***ers to talk to him.”

These are just a handful of stories from The History of William Webb. (In another story, he has a prophetic dream about his future wife!) Not a great Black leader, or an inventor, or the first Black so-and-so to do such-thing. But worth remembering, I think, as a normal, faithful guy, who conquered hardship, found freedom through work and through God, and who wanted to learn and use his mind to do great things.

I don’t know anything about William Webb that isn’t in his History — I don’t know when he died, if his daughter lived to see adulthood (she was just a baby when this book was published, and first two other children died in infancy), or where he’s buried. And I don’t know if sales of his books allowed him to learn to read.

But I really, really hope so.

Other wonderful stories from Black History Month in Detroit

Black History 101 Mobile Museum — This is amazing! I can’t wait to catch this around town, so I liked them on Facebook to keep apprised of their whereabouts (and you can too).

The trailblazing Detroit Plaindealer — One of the first Afro-American newspapers in the country, founded in Detroit in 1883

Love empowered slave couples to flee to freedom — The power of love! An inspiring suite of love / freedom stories from Betty DeRamus.

And finally, some old Detroit-related jazz

Scott and I just re-watched Ken Burns’ Jazz (are you surprised that we’re a big Ken Burns household?) and our home has been filled with the jaunty jibber-jab of old jazz and swing records pretty much 24/7.

I did a five-minute YouTube search to find some old Detroit jazz bands from this era. Here’s one! This song starts out kinda wah-wah-y and slow but gets pretty great. Wait for it!