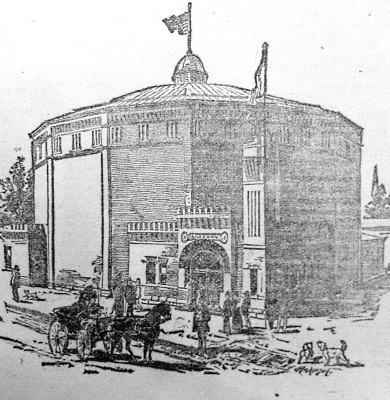 Today, another look at the era of enormous paintings in Detroit. Here’s part one.

Part 2: The Battle of Atlanta

In 1884, John A. Logan, heralded Civil War General, won the nomination for Vice President on the Republican ticket (with Presidential nominee James Blaine). To promote their campaign, Logan commissioned a cyclorama that would vaunt his heroism in the Battle of Atlanta.

I guess he underestimated how long it would take to paint a cyclorama. 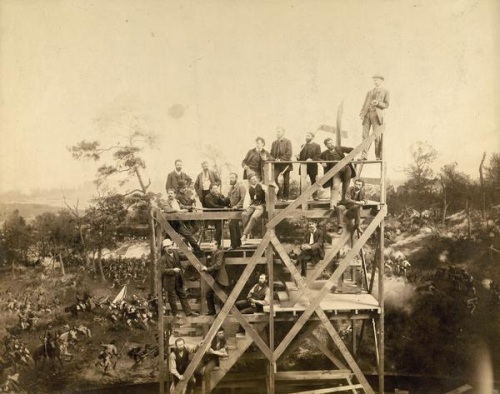 In 1883, the Cyclorama of the Battle of Gettysburg debuted in Chicago. Cycloramas, panoramic in nature but more immersive and over-the-top, were designed to be installed in purpose-built rotundas. You’d walk in, sometimes from winding, narrow tunnels or a staircase beneath the floor, and emerge on a viewing platform. There you were: on a smoke-enshrouded battlefield, amidst dirt and prairie grass and crouching soldiers and corpses. It seemed intensely real.

It was, of course, an elaborate illusion. From Yoni Applebaum’s essay in The Atlantic:

What most astonished observers, though, was the diorama, which began near the edge of the platform and ended at the painting, 45 feet away. Hundreds of cartloads of earth were covered in sod and studded with vegetation, then topped with the detritus of the battlefield. Shoes, canteens, fences, walls, corpses: near the canvas, these props were cunningly arranged to blend seamlessly into the painting. Two wooden poles, painted on the canvas, met a third leaned against it to form a tripod. A dirt road ran out into the diorama.

Also in 1883, a German named William Wehner founded the American Panorama Company in Milwaukee (a city near to my heart, you know). Wehner knew he could find experienced painters in Germany, where panoramas of the Franco-Prussian war were popular. He went to Europe, or worked with agents based in Europe, to recruit some 15 artists to join his crew. In Milwaukee, the artists worked in an octagonal studio at Fifth and Wells — and drank at a bar across the street. 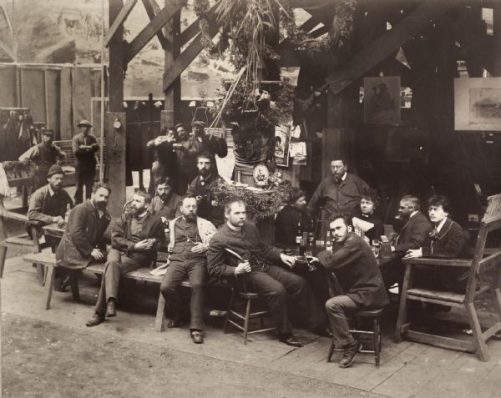 William Wehner traveled here in 1886 to see how things were going. A reporter for the Detroit Tribune caught up with him at the Brunswick bar on December 13, where Wehner — you have to wonder if he was a salty person generally, or just in his cups — complained that the Detroit cyclorama building wasn’t ready yet, then talked trash about another famous cyclorama.

“You had a cyclorama in Detroit some time ago,” said Mr. Wehner, “and I saw it. I am afraid the people of this city will form an opinion of the new exhibit from the old, but that is not fair … People who have seen Battle of Gettysburg only have no idea what a really good cyclorama is. It was certainly the very worst exhibition that I have ever seen.”

Anticipation for the cyclorama, the paper wrote, was at a frenzy — “The people of Detroit have no idea what it will be like until they see it.” Famous attendees expected to attend the debut included General W.T. Clark, Theodore Davis, and General Logan himself, “who will be present to fight the battle over again.”

Two weeks after this article was published,  General Logan died. (When his widow saw the completed painting in Atlanta years later, it is rumored, she fainted at the sight of his likeness.)

Wehner had hoped the Cyclorama would be open by Christmas, but owing to the delay in completing the cyclorama building (at Bates and Larned — seen above) and the labor-intensive installation of the 42-foot high, 358-foot long painting  the Battle of Atlanta didn’t debut in Detroit until February 1887. When the Battle of Atlanta continued its tour, it was replaced with Custer’s Last Stand. As far as I can tell, those were the only two paintings ever installed at Detroit’s cyclorama building, which was torn down in 1891.

In Milwaukee, the panorama painters created that city’s first vibrant art community; after the panorama craze quelled, those that stayed opened their own studios, became teachers, established schools, and found work decorating the Pabst mansion and painting dioramas for the Milwaukee Public Museum. In Detroit, it seems, as with most other American cities, panoramas were a brief and fantastical flash in the pan, and most of the panoramas exhibited here have long since been lost or destroyed.

You can still see the Battle of Atlanta, though — in Atlanta, naturally — where it remains the largest oil painting in the world.

What happened to the Panorama Painters?