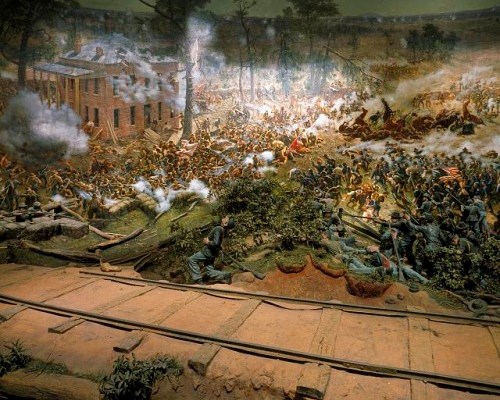 Last week, a pair of essays by Yoni Applebaum in The Atlantic sparked my imagination. If you’re into the Civil War, 19th-century American art, or forgotten entertainments, you might want to read them. They’re about the cyclorama of the Battle of Gettysburg: what it was, as part of a brief and magnificent art fad, and what it means, as a work of art, illusion, and memory. 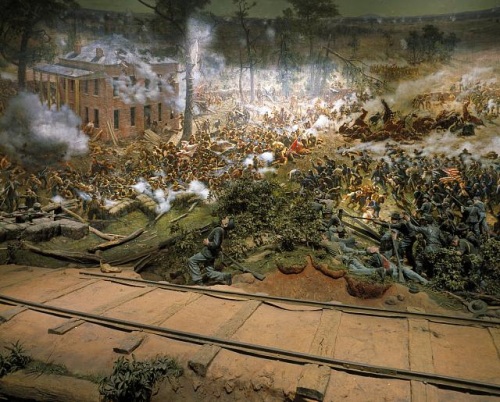 Via Library of Congress

Me being me, after I read them I spent some time (a., freaking out over the now-lost cyclorama of Custer’s Last Stand, which replaced the Battle of Gettsyburg at the Boston Cyclorama in 1888, and (b., scrambling to find out if any cycloramic spectacles were created, or exhibited, in Detroit.

Of course they were! So much so, in fact, that I’m tackling the legacy of the cyclorama in Detroit in two parts.

Before the rise of the cyclorama in the 1880s, its twin sibling, the panorama, was the rage. Starting around 1850, Detroiters could pop into Old City Hall or the Firemen’s Hall and, for 25 cents or so, see the latest “greatest painting ever made” — sweeping views of overland route to California, the funeral of Napoleon, Bible scenes, the life of George Washington. Sometimes they were set up on big rollers and scrolled slowly by a seated audience while a narrator explained the passing scenery. One panorama of New York City, painted by Otis Bullard, was 3,000 feet long, rendering 6 miles of the great city with “a view of more than 700 horses and carriages and upward of 10,000 of its people.” 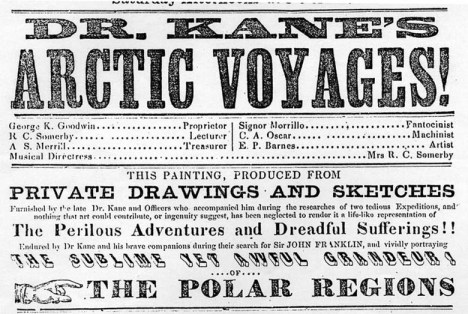 A moving panorama of Dr. Kane’s Arctic Expedition exhibited in Detroit in 1859. Here, an 1857 advertisement for the painting. Source.

Thomas Mickell Burnham, whose painting of the First State Election in Michigan is one of my stubborn favorites, was a moving panorama painter. So was John Mix Stanley, a most-of-the-time Detroiter who, in 1862, painted a “Polemorama” of scenes from the Civil War:

And DIO-PANORAMIC REPRESENTATIONS OF THE IMPENDING REBELLION, (the largest Panorama ever contemplated.) Sketched, painted and completed by the eminent Government Artists, Stanley, Conant, walker, Hillyard, Lamb, Healy, McCormick, Bagley. The Polemorama is visiting a few of the prinicpal cities, prior to being placed on the mammoth revolving pedestal in the north wing of the Smithsonian Institute, Washington D.C.

The remarkable Naval Engagement between the MONITOR and MERRIMAC is faithfully illustrated by Moving Models, Undulating Water, &c., &c.

Exhibitions on Wednesday and Saturday Afternoons, and each Evening this week.

In 1854, a French painter, Mathuren Andrieu, came to Detroit to exhibit his Panorama of the Great West, which included views of Chicago, St. Louis, and Springfield, IL. Those who wished to see Detroit added to the panorama were advised to stop into the nearest bar or hotel and purchase petition tickets. Within the week, Mr. Andrieu announced that, due to popular demand, he would be temporarily closing his exhibition in order to paint Detroit. Call the Biddle House, the paper advertised, for the chance to have your business prominently included. (Raffles and sponsorships like this were built into Mr. Andrieu’s business plan, it seems — the following year he traveled to Cleveland, and subsequently added Cleveland to the painting. Kind of brilliant!)

“Many of our best-known citizens may be seen on the avenue,” wrote the Free Press of Andrieu’s Panorama of Detroit. “The artist is daily adding some well-known figure.” Famous denizens portrayed in the painting included Bishop LeFevre and former Mayor (then Collector of the Port) John Harmon. To complete the entertainment, Andrieu traveled with a minstrel band, but Mr. Andrieu may have been amusing on his own — in Cleveland, a reporter wrote that Andrieu “delighted the audience … by singing the Marseilles [sic] as only a Frenchman can.”

In part 2: A Milwaukee connection, the long-gone Detroit Cyclorama building, and the creator of the Battle of Atlanta Cyclorama talkin’ trash at a bar.