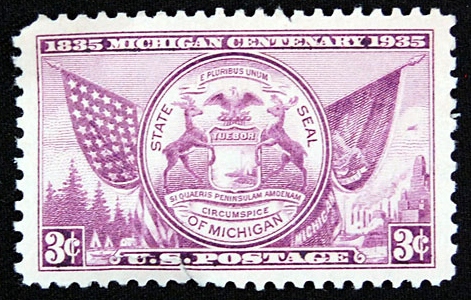 One-hundred and seventy-five years ago, Michigan won a battle for statehood that had plunged us into war with Ohio for the disputed Toledo strip, riled up Congress and caused President Jackson to remove our Governor-elect Stevens T. Mason from office.

Here is the post I always share on this occasion, although of course you will note I wrote it in 2010. Capitol Park has since been redeveloped; Stevens T. Mason has been peacefully re-interred (after a brief scare over his missing remains).

Other items you may enjoy:

I love this Michigan centennial stamp — it commemorates the 1835 ratification of our constitution and the opening shots in our battle for statehood rather than the official (and less exciting) admission to the Union in 1837. Via michigan.gov:

How about a 175th anniversary chocolate cake? (Props to Vintage Mitten for posting a similar recipe on Facebook)

And this Message of the Acting Governor, Stevens T. Mason, to the Legislative Council, August 17, 1835 — in the heat of the war with Ohio, and right before Jackson had Mason removed — is worthy browsing for today.

How is the observance of Michigan to be compelled by the United States? Is it at the point of a bayonet? I can see no other course.