Live from Milwaukee: Last night at dinner I lamented Detroit’s dearth of places to get a beer and a great piece of pie. (If you know of a good one, please share.)

Then I thought, Maybe it is OK that I no longer have a pie and beer habit. A beer habit on its own is more than enough.

This morning, though, just for old time’s sake, I had pie and a beer (New Holland Oatmeal Stout — from MICHIGAN!) 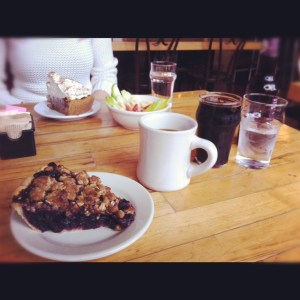 It still feels strange to be hosting an out-of-town book event, since my book is so specifically about, you know, one specific town. So I have been over-explaining myself. (“Wisconsin and Michigan! Part of the same Territory! Had some of the same Governors! Great Lakes fur trade and so on!”) When ThirdCoast Digest (I used to be their senior editor) asked me to write a short preview of my party, I turned in a 1300-word historical essay/love letter. 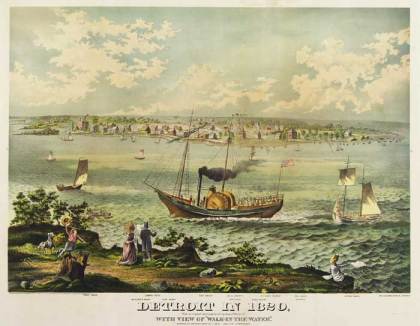 I’ve shared my affection for Captain Frederick Pabst before. What I forgot about — until I woke up in the middle of the night and remembered it — was that Captain Pabst, in his sea-captain days, crossed paths with another captain — Detroit shipping king and mega-millionaire industrialist Eber Brock Ward.

Captain Pabst was a real captain. In 1848, at age 12, he moved from Germany to Milwaukee. Striking out here, the family moved to Chicago, where Frederick’s mother died from cholera. Frederick Pabst had to find work. After odd jobs at hotels and restaurants, he landed (no pun intended) as a cabin boy on a Great Lakes steamer.

It was his job to collect tickets from passengers as they disembarked the ship. One day, the story goes, a passenger claiming to be a certain Captain E. B. Ward tried to leave the ship without handing over a ticket. Frederick Pabst stopped him. Captain Ward protested on the basis that he owned the ship. Pabst made him go back to his cabin and wait until his identity could be confirmed. Ward was impressed, not disgruntled. (OK, maybe he was also disgruntled. But hopefully just a little.) Pabst had composure. He showed some pluck. Some resolve.

Captain Ward knew something about that. Born in Canada in 1811, Eber Brock Ward came to Detroit with his family in 1821. The frontier port town was muddy, provincial, and had yet to recover from a devastating 1805 fire. Just a few rickety boats, mostly British-owned, plied the Great Lakes, and whenever one of them sailed into Detroit’s harbor — announcing her arrival with a booming report of the cannon — the entire town wandered to the river to watch.

You can read the whole essay here.

Detroit and Milwaukee: Meant to be!