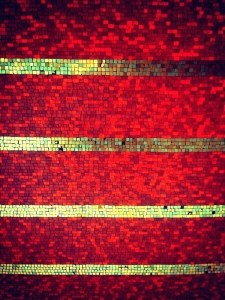 The first time I realized that I loved Christmas — as an adult — was in a grocery store in Milwaukee. It had been a tough year, full of loss and heartache, too much drinking, a persistently empty checking account, nagging aimlessness. It wasn’t long after Thanksgiving. I was probably buying noodles, eggs, and cabbage — all I ate. The store had put up a red ribbon-decked tree and there were loose cranberries for sale in big bins. It smacked me in the heart like a cinnamon-scented hammer: I cannot goddamn wait for Christmas. And I guess it had nothing to do with the holiday itself: it just meant that I could go home, turn off my phone, and hunker down at my parents’ house for a few days, safe in a harbor of blankets, dogs, movies I’d watched a thousand times, and the soft smell of sauteed onions.

Since then, I have loved Christmas mightily, in all of its sentimental glory, and it has only been better since I started spending it with Scott: more family, more love, more wine, more crab legs, more card games, and the extra thrill of midnight mass, the only time during the regular calendar year that I set aside for my secret spiritual feelings, and during which I inevitably sob my face off for ineffable reasons.

This year, though — despite the fact that it has been a very big year, and I am more than ready for a long break — I can’t muster the same wonder. Midnight mass is cancelled. My parents just moved to Florida. We will still play cards and eat crab legs, and I am sure by night’s end I will be passed out on the couch at Ciocia’s house, drunk with awe and love and Jezy. But now, just a few day’s out, I am feeling unmoved. Maybe I’m just tired? Maybe it’s just too balmy?

So it was beautiful to find this letter from William Woodbridge to his daughter Juliana. Woodbridge was living in Washington, serving his first term as U.S. Senator from Michigan, and spending his first Christmas away from his family. His daughter was my age, living with her husband, Henry Backus, in Detroit.  His melancholy – resigned to Providence – reminds us that Christmas is sometimes best defined in our hearts by what it is not.

Your welcome letter of the 10th ult. reached me in due time. I read with much interest your remarks on the altered state of things you anticipated when you thought of the then approaching Christmas. Contrasted with such as are past, rarely, indeed if ever, has it happened that a Christmas has gone by without seeing us all together; and there is something grave in the thought that at length, and for the first time, that day of customary hilarity should be decreed to pass by in the absence of one who loves you, and loves you all I do. But it is perhaps better as it is; better that we all should learn by degrees and with contented, though subdued feelings to submit ourselves to the decrees of Providence. Though the day was not untinged by melancholy to me, yet it passed, amidst the bustle of ”carding and being carded” and all that with sober and unruffled quiet. With you at home, it fared I trust a little better.  My last letter was from L., and on ”Christmas Eve.” The stockings had with all due formality been hung up, and you and W. and B. were to have added to the cheerfulness of the occasion by joining in the Christmas dinner. This is as it should be, and many times and often may ”Merry Christmas” occur to all who at that table met.

I hope your holidays are full of joy, whatever they are, wherever you are, and whomever you are with. I will be taking a break from the blog, but hope to check in at least once before the end of 2011 and will return to regular posts by early January, having had some time to rest, clear my head, and read lots of dorky old books.

Other posts about Christmas from last year and the previous year and here is Santa wishing all of Detroit a good night.