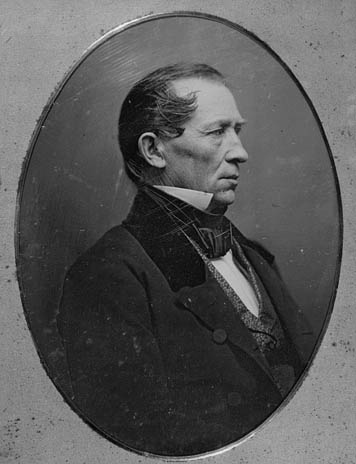 This is Hiram Walker. He was born in a small town in Massachusetts in 1816. When he was 22 years old, he moved to Detroit.

Hiram Walker tried his hand at several pursuits, but for nearly 20 years he couldn’t catch a break. He started a grocery store; it failed. He started a tannery; just when it seemed like it was going to work out, it burned down. He started another grocery store — where he experimented with selling his own vinegar and distilling whiskey — then he lost everything in the Panic of 1857.

So Hiram Walker said: To hell with it. And he moved his business operations to Canada.

Why Canada? To begin with, the land was cheaper. Hiram Walker had been dealing Canadian grain to brewers and distillers in southeast Michigan from his latest Detroit grocery, and he knew that there were no steam-powered grain mills on the Canadian side of the Detroit River — a niche he expected to fill.

But Hiram Walker also wanted to open a distillery, of which there were many in Detroit, and not so many in Canada. But in 1855, the Michigan Constitution had adopted an “iron-clad” version of the so-called Maine Law, prohibiting the traffic of liquor except for medicinal and scientific purposes. No one in Detroit paid much attention to the law; though it was in effect until 1875, it was roundly ineffective. (I guess it didn’t help that Detroit didn’t have a municipal police department until 1865.)

Still, with prohibition cases constantly tied up in (though often thrown out of) court, Hiram Walker may not have wanted to risk the chance that his distillery could be suspended or shut down. So it was off to the north SOUTH bank of the strait, where Hiram Walker founded Walkerville, his new global HQ, in 1858.

There he created a town from the ground up, founding schools, laying pipes for municipal water, building homes for his employees, establishing a private bank, and starting a church. (Hiram Walker fired one preacher, legend has it, after finding out about his sermons against the evils of alcohol.) Hiram was the “benevolent despot” of Walkerville, writes Ronald G. Hoskins in the Dictionary of Canadian Biography. But he only lived there for about five years; in 1864, Walker returned to Detroit, where he lived the rest of his days, commuting to work every day on a direct ferry from his riverfront property to the wharf at his distillery.

Canadian Club got its name in 1890 when, says the legend, the U.S. government — in response to demands from American distillers — forced Hiram Walker to declare that his whiskey was an imported product. But its international label only increased its allure, and his whiskey sold even better. (It may have been simply smart branding on Hiram Walker’s part, and not a federal edict.) Coupled with an 1894 bond law that standardized how spirits were aged, Canadian Club gained popularity among American drinkers, and when he died in 1899, the distillery was a multi-million dollar operation.

And that is how Canadian Club, while certainly Canadian, was made possible, in part, by Detroit.

Hiram Walker is buried in Elmwood Cemetery. Walkerville still exists, too, though it is part of Windsor, and it is near the top of my list of field trips to take once I renew my passport.