That we may be more worthy of the place we now hold in the world. 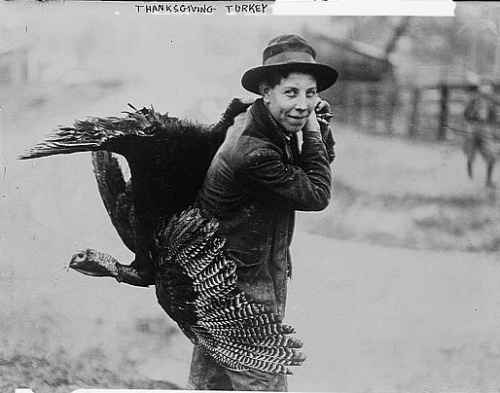 Thanksgiving as we know it today — celebrated on the last Thursday of November — was nationally, officially proclaimed by Abraham Lincoln in 1863. But Thanksgiving had been celebrated locally, and proclaimed by individual states, long before that.* It was kind of a New England thing  — pilgrims, and all that — but over time it spread through the Northern states and territories, and wherever New Englanders were going.

Michigan became an early adopter of the Thanksgiving tradition when it celebrated its first official Thanksgiving on November 25, 1824, by proclamation of Governor Lewis Cass — a New Englander, under whose term boatloads of New Englanders came to the Territory. Successive governors took up the call, and by the 1840s — when other states were just begin to proclaim Thanksgivings — it was old-hat. Here is Governor John Barry’s 1844 proclamation, signed at the Capitol in Detroit and published in the Michigan Farmer:

Whereas, the time is approaching when, according to a long-established and well-approved custom observed by most of the States in the Union, the people unite in rendering Thanksgiving and praise to the great Giver of all good; and

Whereas, though sanctioned by no legal authority, it has been customary for the Chief Executive officer of the several States to recommend a particular day to be set apart for such purpose; and

Whereas, it is a duty incumbent on all to render thanks to the Most High for his divine protection;

Now, therefore I, John S. Barry, Governor of the State of Michigan, have thought proper to appoint, and by these presents do appoint, Thursday, the thirtieth day of November next, as a day of Public Thanksgiving and Prayer, and I do hereby recommend to the people of this State to set apart and observe the same accordingly, that they assemble on that day in their several places of public worship, and with united hearts render unfeigned thanks to the great Maker and preserver of all things, for the numberless blessings vouchsafed to us during the past year, that he has preserved our lives, maintained peace within our borders, stayed the pestilence, averted famine, rewarded the husbandman with abundant harvests, and preserved to us inviolate our civil and religious institutions, and, with deep humility, confessing our sins, give thanks for all his numerous mercies and humbly ask a continuance of Divine favors.

Just for contrast, and for fun, here is Hazen Pingree’s Thanksgiving proclamation from1900. I love the emphasis he places on justice, and the need for us to be generous, and to earn the blessings we enjoy from our place in the world:

In accordance with the proclamation of the President of the States, and in compliance with a venerable custom, I, Hazen S. Pingree, Governor of the State of Michigan, hereby designate and appoint Thursday, the twenty-ninth day of November, 1900, as a day of thanksgiving and praise to the God of men and nations, for the manifold blessings received during the past year.

Let us this day be thankful for the abundant yield of our fields, and for the freedom from pestilence and famine.

Let us remember the ready response which has come from sympathetic hearts, touched by the calamities of our fellow citizens, the generous contribution to those whose homes have been destroyed by tempest and flood, and the development of humanity in the of methods which alleviate the sufferings attendant upon war.

Let us as we unite in our services of thanksgiving and praise, remember with gratitude the growing sense of justice among all classes of men, and the establishment of higher ideals of social life.

While we remember these blessings with thankfulness, let gratitude inspire us to so utilize our high powers of citizenship that we may be more worthy of the place we now hold among nations of the world.

How did Detroiters celebrate Thanksgiving? Besides the usual praying, feasting, and drinking, you could shoot your own turkey at the bar.

(*Side note: It was not unusual for state or local governments to declare a day of public Thanksgiving for any number of blessings and lucky strokes. In July 1849, an outbreak of cholera seemed to have passed Detroit by, and the city closed its schools and proclaimed a day of Thanksgiving that it had so far avoided the scourge. No such luck, as it turned out; in July, people started to die.)

Happy Thanksgiving, friends and readers! I am grateful for all of you. Also grateful that Detroit no longer suffers from cholera outbreaks.