The good people at Single Barrel Detroit have released the results of their new project, “Four Films for Attention,”  in which a terrific local band called Prussia dolls up in fancy dinner clothes and prances around the historic Briggs Mansion in Boston Edison. For attention! The videos are remarkable (especially the official video — mildly NSFW if your W is suspicious of cross-dressing, gun play and close-ups of pig roasts), and obviously they’re working; Prussia was just deemed one of the top 15 bands to see at CMJ 2011, which draws something like 900 acts.

SBD asked me if I wanted to write a little about Walter Owen Briggs, who built his English Manor-style mansion, nicknamed “Stone Fences,” in 1915. So I read up.

Someone should write an opera about Walter Owen Briggs. 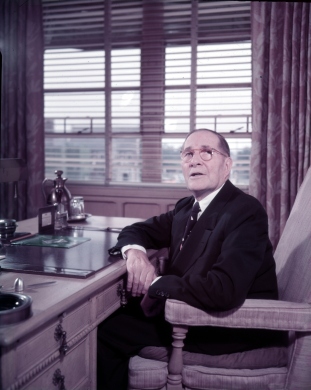 Opening scene: the streets of Detroit, 1907. Thirty-year-old Walter Owen Briggs, a life-long Tigers fan, always buys his tickets from the same cigar stand vendor. But it’s the World Series with the Chicago Cubs, and the game sells out. There’s a comic duet between Briggs and the cigar dude, but there’s just no way Briggs can get tickets; Bennett Park seats just 5,000. Defeated, Briggs shakes his fist to the sky and vows to one day build a stadium that will seat every soul who ever wanted to see a baseball game.

Twenty years later: Walter Owen Briggs, 50, is president of the largest auto body manufacturing company in the country. Briggs employs thousands of workers, who have come to Detroit from all corners of the earth. A kingly capitalist success story, Briggs buys a 50% share of the Detroit Tigers and, in a big choral production number, promises he will not make a cent on the endeavor: the Tigers are for all Detroit’s children. And they’re for winning. That’s all that matters to Walter Owen Briggs.

That year, a conflagration at one of his plants — sparked by unsafe conditions and poor ventilation — kills 21 workers. ”Bodies by Briggs,” the labor press leads.

Scene: 1940. Briggs is sole owner of the Tigers — his former partner, Frank Navin, has been dead for five years, having suffered a heart attack whilst horseback riding just 6 weeks after the Tigers won the 1935 World Series. Briggs Stadium, as it’s been re-named, seats 58,000, a proud testament to Detroit’s cosmopolitan, victorious baseball society.

The Tigers are racing for another pennant. Polio-stricken Briggs is in a wheelchair. His field is full of old-timers (“The G.A.R. of baseball,” wrote Malcolm Bingay), because Briggs wants to win one World Series on his own before his death, which he believes is imminent. The Tigers deliver an American League pennant for their ailing owner, who is famed for his name-your-price offers and personal gifts of bespoke suits for players who perform like stars. 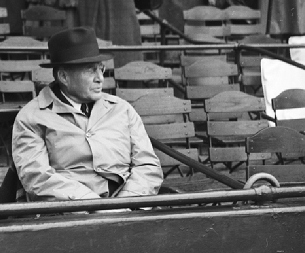 Walter Owen Briggs does not die that year, and the Tigers do not win the World Series. But the world — in Detroit, at least — is changing radically. Briggs Manufacturing has been unionized since 1937, although Mr. Briggs had stridently resisted those efforts. His ball players are trying to organize, too; Briggs pretends not to notice. His company is one of the largest employers of black workers in the city. His team will see no such integration in Briggs’s lifetime.

In June 1943, racial tensions boil over into a bloody riot, killing at least 34 people, wounding hundreds, and leaving a city dazed and horrified.

Scene: the Arsenal of Democracy. Walter Owen Briggs, his body nearly useless but his mind just as keen as ever, has no time for baseball. His 40,000 employees are powering the most heroic war production effort the world has ever seen. 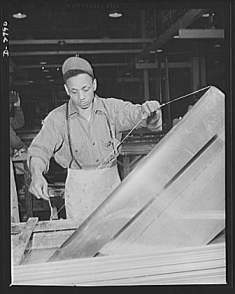 (A worker priming an airplane wing at Briggs Manufacturing Co., 1942. Library of Congress) 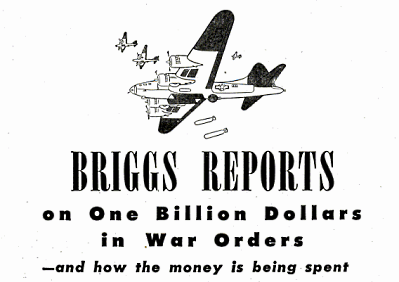 The Tigers, with many of their players drafted into service, are rough around the edges. But with Hank Greenberg slugging and Hal Newhouser on the mound, the boys take the team to the World Series and, in seven games against the Chicago Cubs, win the championship.

Is Briggs a tragic hero? A compellingly human villain? Unshakable, outrageously rich, Briggs busted unions and broke strikes throughout the turbulent 1930s, called armed federal soldiers to his stadium during the 1943 riot, had a motorcade escort him to the stadium from his estate in Bloomfield Hills, and refused to sell box seats to black Detroiters.

But the same workers who cursed his name in Detroit’s factories brought their kids to his splendid stadium and watched his well-paid Tigers play ball. From the sweat and fire of an imperfect city, Briggs forged something wholly and timelessly loved: a champ team, a stadium for the ages, and a refined culture of baseball that, under his direction, had come into its own. It was Briggs’s vision of something like paradise. He held on to players he loved, regardless of how they performed, and lavished them with gifts, cash, and affection. All summer long, he let city kids see games for free. The world he created there was nostalgic, unchanging and certain. In his heart was a child climbing on a box to watch baseball through a knothole in a wooden fence. 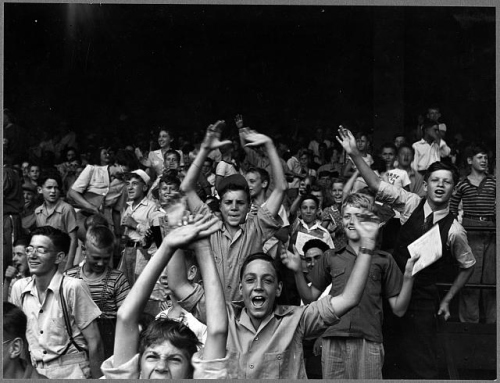 After the win in ’45, Briggs was rarely as enthusiastic or engaged as he had once been; though he held on to his 100% share of the team, he slowly retired from its affairs. He died in Florida in 1952.

Does anyone know a good librettist?