Beth Olem: The cemetery in the GM Poletown plant 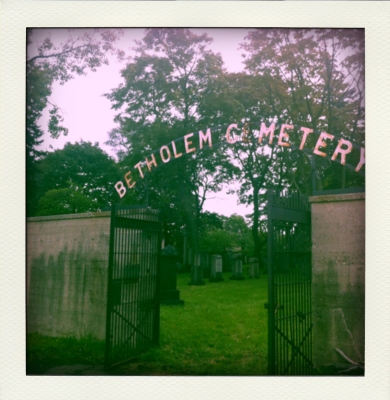 In some ways, this is the story of all cemeteries in Detroit: Some people hiked out to the country and bought the land, thinking it would be far, far away, forever and ever. Dust to dust. But what we imagined about the future wasn’t imaginative enough, and in just a few generations, the cemetery was swallowed up.

The difference, of course, is that most cemeteries were not swallowed up by car factories.

It is one of the oldest Jewish cemeteries in Michigan. (The Beth El plot in Elmwood was established in 1850 as an independent cemetery and therefore takes the “oldest” title.) Congregants of Shaarey Zedek acquired the land for Beth Olem in the early 1860s, and the first burial probably happened around 1868. Germans owned the surrounding farms. Later 19th-century cemeteries like Woodmere were intentionally planned according to principles of rural design; Beth Olem was just rural. As we drove with a security escort across acres of parking lots — past test tracks, loading docks and clearance gates — I tried to imagine what this trip used to look like. Muddy horsepaths. Cows in the road.

That Beth Olem is from that world — and now exists on the grounds of a sprawling automotive complex that is manufacturing electric cars — inspires some serious spiritual awe. It’s a small, old-world cemetery, just over 2 acres, ringed by a red brick wall that hugs in the graveyard’s towering, ancient trees. It’s like a mirage. Its tombstones are sooty with age. 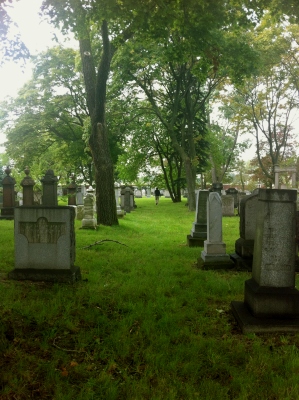 We were greeted by a representative of the Michigan Jewish Historical Society, who put down the gigantic pair of garden shears he was using to hack down a ghetto palm, then offered us water bottles and a list of names and warned us that the mosquitoes were ugly and biting that day. 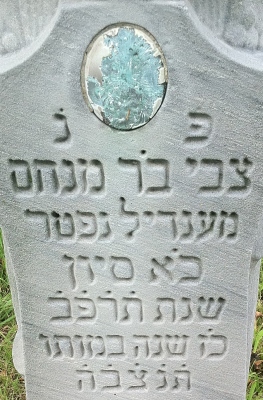 This is a pastoral Jewish cemetery in the middle of a car factory. You can tumble that fact around in your head until it is so polished that it reflects everything about Detroit history forever and ever.

Before GM enveloped Beth Olem, Poletown did. In the 1870s, Polish Catholics began to displace the German farmers who had originally settled the area. Over time, Detroit’s Jewish community — concentrated close to downtown  — struck a northwestward path of migration that largely missed Polish Detroit and Hamtramck. Some Eastern European Jews settled in and around Poletown, but Beth Olem was still out-of-the-way for most Detroit Jews, and those buried there were mostly poor. By the end of World War I, there were dozens of metro-area Jewish cemeteries to choose from, and Beth Olem was tumbled down, its wooden grave markers weather-worn and toppled, a chapel built in the 1880s sagging with damage. 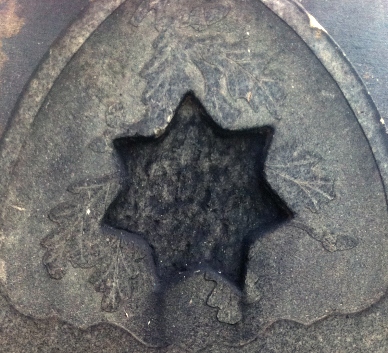 Beth Olem’s complicated relationship with the automotive industry (if you don’t count the fact that no one could get Beth Olem very easily until the automobile came along) began in the mid-1960s, when Chrysler built its Dodge Main plant around the cemetery, cutting off its entryway. The company extended the drive and paid the Jewish organizations that owned the cemetery $10,000 for repairs and maintenance.

And then, in 1981, GM invoked eminent domain (in a Michigan Supreme Court decision that has now been reversed) and tore down Poletown to make way for the Detroit/Hamtramck Assembly. (Another story for another time. Just Google “Poletown” if you are curious and dig in.) 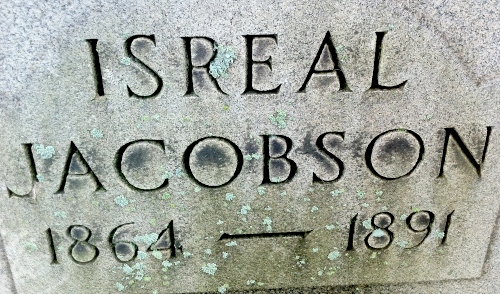 Halakhic law forbids the removal of Jewish graves, and Michigan law makes it a big bureaucratic pain. (It wasn’t always so tough; Detroit’s municipal cemeteries were endlessly shuffled around in the mid-1800s, and some graves, like the military burials at Fort Shelby, were simply hauled into the river as fill or ignored and built right over.)

So Beth Olem stayed where it was, under the stewardship of Shaarey Zedek. It is open to the public twice a year for a total of eight hours: 10 – 2 a.m. on the Sundays before Rosh Hashanah and Passover.

I struggle with Beth Olem. I’m grateful that it still exists where it has always existed. I’m frustrated that it’s mostly closed to the world. It represents the strange and mournful loss of an entire community and its cultural history, and at the same time, it’s the only part of that community that survives. And that is something to cherish. 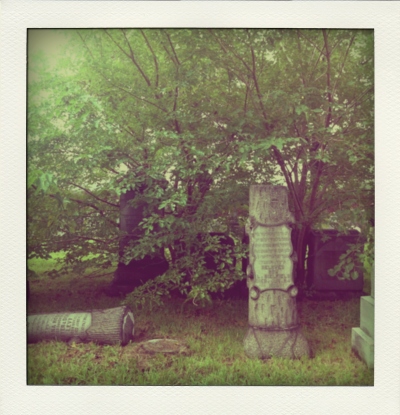 The man from the Jewish Historical Society asked us to bring garden tools the next time we visit. And so we will.

“The True Story of the Cemetery in the General Motors Parking Lot“, An entry-level overview of the cemetery by Milton Marwil from Michigan Jewish History

“House of the World“, a semi-personal essay by Eileen Pollack, that digs deeper into the Poletown case and some speculation on GM’s relationship to the cemetery

And another Jewish cemetery of interest: Workmen’s Circle, which I visited last summer when I learned my great-grandfather is buried there.