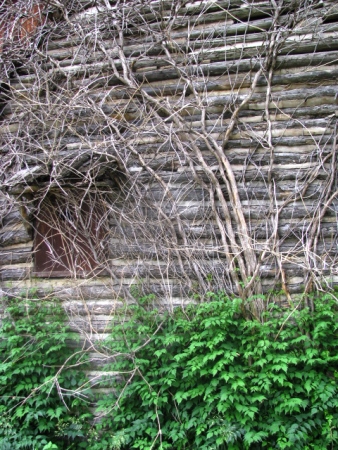 It is so hard for me to believe that this building still exists. But I am grateful.

Just witness in the season how the crowds of visitors from abroad press and crowd through the rustic log cabin at Palmer Park, a structure so suggestive, in a way, of the early days, and besides it is situated quite near (little over a stone’s throw) Mad Anthony Wayne’s road through the woods to Pontiac, over which his army marched with its artillery and wagon train so long ago.

The Log Cabin — commissioned by the General’s cousin, Senator Thomas W. Palmer, as a gift for his wife Lizzie — opened in 1887. The Palmers summered and entertained there until 1893, when they gave the city of Detroit 140 acres of their land, including the cabin, for a public park.

That park — you know it as Palmer Park — was originally called Log Cabin Park.

I love the Log Cabin, but I have always wondered: Why a log cabin? What did it look like on the inside? Did they just build it for the scenery, or to store the family antiques, or did they actually plan to use it?

I thought this might be a chapter in my book, but as my deadline pressed closer I had to quietly scratch it from my research plan. So I was really relieved when your friend & mine Dan Austin asked me to write about the old Log Cabin for his new site (now in beta!), HistoricDetroit.org.

To answer one of those questions, here’s what it looks like on the inside. 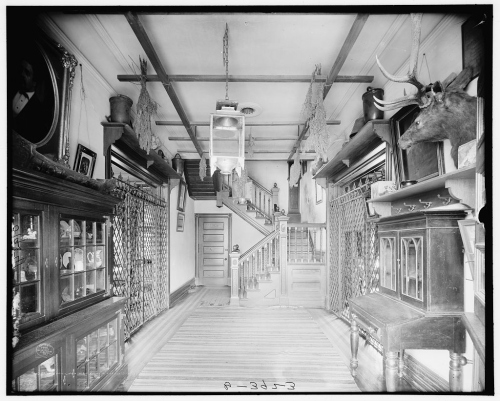 (Source) (This picture takes my breath away, every time.) 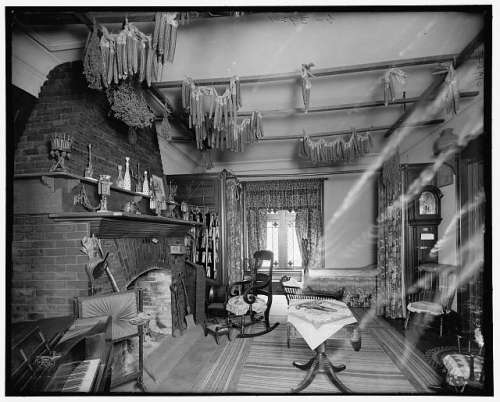 And yes, people actually lived there, at least during the summer, although they also used it to show off some family heirlooms, including a century-old piano, a mahogany grandfather clock built in 1787 which once belonged to Lizzie’s grandfather Judge James Witherell, and hand-me-down furniture from the early 1800s.

This used to baffle me, but as I was working on the book, I started to feel like I recognized, and to some extent understood, Detroit’s pioneer imagination. People did, at one time, live in log cabins in Detroit. By the time Lizzie and Tom got around to building theirs, those people were dead or dying, their log cabins long destroyed. Detroit was more crowded than it had ever been. And the old ways of making a home — by fire, by farm, by flint-lock pistol — had given way to modern convenience, urban efficiency, and industrial fortune.

Of course, the Palmers reaped tremendous industrial fortune, and their Log Cabin did not lack modern convenience — although there was an old-timey iron pot on a crane in the dining room fireplace, Lizzie had a brand-new Detroit Jewel stove in the kitchen.

But they still missed the old days. And at the Old Log Cabin, they could relive them at their leisure.

Read more about the Old Log Cabin at HistoricDetroit.org.

And here’s my first post about Palmer Park, back when I first discovered that Thomas W. Palmer was not only related to, but much more famous than, General Friend Palmer.