The princess, the gypsy and the cake.

Clara Ward, born in 1873, was the youngest child of Eber Brock Ward, multi-millionaire captain of pretty much every pre-automotive industry in Detroit and the midwest, and an actual captain, too. He died when Clara was two years old, leaving her all of his lumber fortune. (He also left behind: steel fortune, railroad fortune, silver and salt mine fortune, shipping fortune, real estate fortune, fortune — misc.)

When she was 17 years old, Clara married the Belgian Prince de Caraman-Chimay and became one of Detroit’s elite contingent of gilded age celebrity princesses. It was the ultimate status move for wealthy industrialists: marry your pretty young daughter off to a minor European monarch, who was probably broke and needed some cash for repairs on the moldy old chateau. Bam! You were royalty.

Detroit had finally come of age.

Courtly types weren’t too fond of Clara — because, rumor had it, King Leopold was a little too fond of her. Clara and the Prince left for Paris in 1894 when they got tired of dealing with the scandalous royal gossip.

Paris in 1894! Music! Bohemians! The Moulin Rouge! Absinthe! Cafés! I bet it was fun. Somewhere in partyland, Clara met a Hungarian violinist named Rigó Jancsi and, to the bafflement of the general public and the panting delight of tabloid reporters, fell in love and ran away with him. 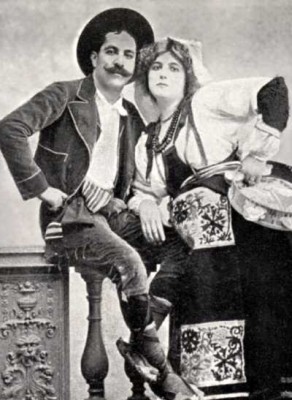 The Prince de Caraman-Chimay sought a divorce. Meanwhile, gossip rags followed Clara and Rigo all over Europe. Toulouse-Lautrec painted them. Clara, inspired by Rigó’s artsy free-wheeling ways, performed at cabarets and salons an art she called poses plastique (basically: wearing something titillating and standing still, in a pose, for a long time).

For a few years they were the toast of the continent. And Hungarians, proud of their hometown boy made good, invented a cake to celebrate.

It is called Rigó Jancsi cake, and OF COURSE I HAD TO MAKE IT!

Okay, but. While my general kitchen skills are about average, my baking aptitude is seriously sub-par. I have been trying to get better, a little at a time — an easy citrus cake here, some crunchy spice cookies there. I can handle your run-of-the-mill muffins, soda bread, or drop biscuits. Luckily I am not a huge fan of bakery anyway.

This cake is WAY out of my league. I tried it anyway. Here is what I did. It’s not really a recipe, exactly —more like an archive of my effort, with my mistakes faithfully logged and the drinks I enjoyed while baking it recorded for the ages. If you want to try this cake on your own, I would start fresh here. It is a little different from the recipe I used, but the recipe I used had errors in it.

A cocktail or two, because this is kind of hard. I had a stargazer — one part rye, one part Lillet, a dash of bitters —followed by a Basin Street — 2 parts bourbon, one part lemon, one part Cointreau. I liked the second one better. 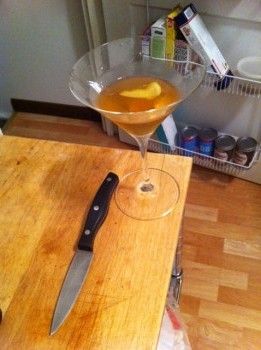 For the sponge cake:

4 ounces semi-sweet chocolate (I accidentally dumped in the entire 10-oz bag of chocolate pieces. Oops! I removed about half of them, so maybe I used about 5 oz instead? I guess!)
4 tbsp butter
4 eggs, separated
6 tbsp granulated sugar
1 tsp vanilla extract
1 tbsp dark rum (I doubled this, because that is how I roll.)
1 cup heavy whipping cream

Make your sponge cake first: Preheat the oven to 350. (I waited to do this until the last possible second. Because we are under a heat advisory, friends!)

Cream together the butter and sugar, then beat in the eggs, one at a time. Add the vanilla.

In a separate bowl, sift together flour, cocoa, baking powder, baking soda, and salt. I use this fancy Milwaukee-made cocoa powder, as a nod to Eber Brock Ward’s steel mill on Milwaukee’s south shore. Also, because it’s the only kind of cocoa powder I have. 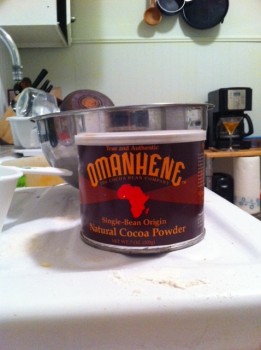 Pour the batter into a parchment-lined 12×2-inch rectangular cake pan and pop in the oven for 25-30 minutes, until cake is puffy and a knife comes out clean.

While your cake bakes! Make the mousse. And another drink for yourself.

Melt together the chocolate and the butter in a double boiler or, if you are like me and don’t own one, a heat-safe bowl placed over a pan of just an inch or so of simmering water. 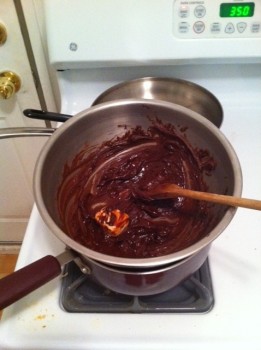 Stir regularly to make sure it doesn’t burn. Remove from heat and let it cool when it is melted.

Whip together egg whites until they form soft peaks. Add the sugar and keep whipping until said peaks are stiff. Then fold in your egg yolks, rum, and vanilla. 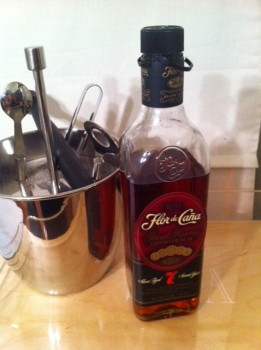 In a separate bowl, whip your cream. Stiff peaks. Stir in the melted butter and chocolate, and then stir THAT into your whipped eggs. My mousse was pretty runny (I got impatient! Waiting for those stiff peaks!) so I left it in the fridge to set overnight. 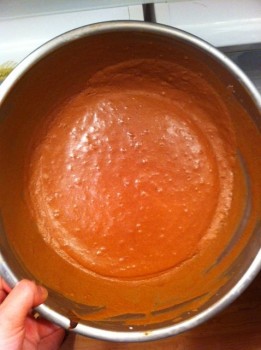 The flat mousse really dampened the effect of the tall, fluffy cake, so in the future I might set it for an hour, then whip it again, then layer it on top of the bottom half of the cake in some sort of shape-forming pan, then leave that whole number to set in the fridge overnight.

When your cake is done, let it cool. Then slice it horizontally. I was so nervous about this part but it turned out not horribly. Unfortunately I cannot recommend a cake-slicing technique because I just took the longest knife I had and sloooooowly tried to slice my cake open as evenly as possible. It still turned out a little ragged but, hey. I’ll take it. 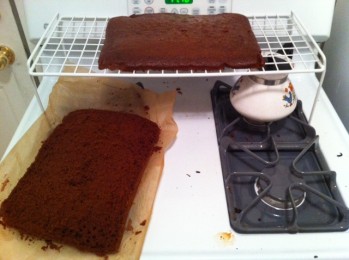 Also, that is a shoe rack.

Glaze the top of the cake with the glaze you will make by putting everything in that glaze recipe in a microwaveable bowl, then nuking it for about a minute. Take it out of the microwave, stir it up, and use a spoon or a spatula to evenly coat the top slice of your cake. Leave it overnight; it will harden into a frosting. 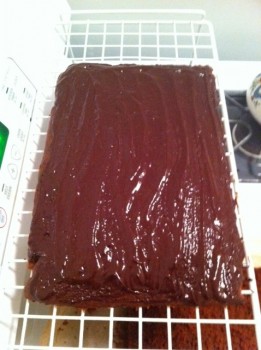 Today I spooned the mostly-set mousse (still a little runny!) on the bottom layer of the cake, then gently placed the top layer over it. I was worried about a smushy sandwich effect and my worries came true, but next time I will make a better mousse. 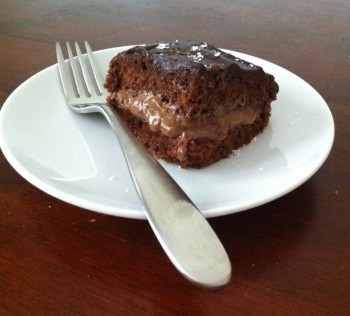 It tastes good, though! It is outrageously rich, but then again, so is the story of Rigó Jancsi and Clara Ward.