Novi, Michigan: What’s in a name?

Whenever people make the lazy assumption that people over 50 don’t understand how to use computers/the internet, I point them to Joan Ginsberg — my mom — who has more Twitter followers than I do. Usually, she blogs about HR and employment law. Last year she took me on a history tour of Garden City. Today she is writing about the city she lives in and how it got its name. It is true that I sometimes visit just to go to the run-down little cemetery near her house.

It was in 1974, while I was an undergrad at Michigan State University, when I first heard the story. According to my friend — who was perhaps a little drunk at the time — the name for the Detroit suburb Novi came from the fact that it was the number six stop on the Grand River toll road.

How quaint is that? So quaint that I have been willing to live with that legend unchallenged all these years.

At least until recently, when a blogging daughter with a looming book deadline needed a hand with a guest blog. So I set out to discuss stagecoaches and poke bonnets and signs from the mid-19th century about the origin of the name “Novi.”

Sadly, it turns out that the legend is totally untrue. The Grand River toll road wasn’t even constructed until the 1850’s, more than 20 years after the township was named.

The “number six” legend persists in other forms, like “the 6th stagecoach stop from Detroit,” or “the 6th stop on the railroad.”  They’re wrong, too.

While this page from The History of Oakland County, published in 1912, puts those rumors to rest, it doesn’t help explain the real origins, does it? I mean, wanting “a shorter name than West Farmington” (which the area was called at one time) is hardly the reason anyone would choose “Novi.” 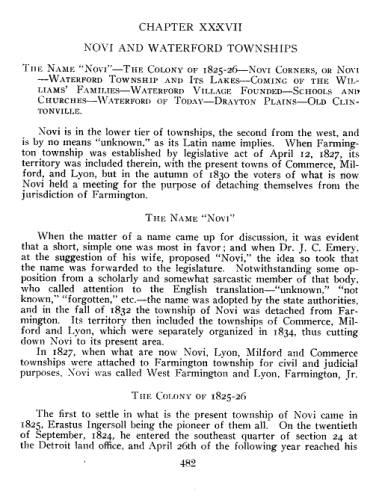 City officials agree that the actual origins of the name were not put on record, and the reason for proposing and adopting the name Novi will likely never be known. There is a romantic story about a heartbroken Yugoslavian soldier choosing the name Novi as a tribute to his lost love, but, sadly, no actual evidence that this was the case.

Whatever the origins of the name “Novi” (which is pronounced NO-vy, folks, not no-VEE, which is what my GPS calls it), it is great to live in a city that contains a historic cemetery within walking distance of my house, to encourage visits from The Night Train.