We haven’t visited with General Friend Palmer in forever!  You remember him, right? The author of Early Days in Detroit, casual historian, lover of dilapidated graveyards, cousin of Senator Thomas W. Palmer, my hero?

Here’s a secret: I’ve been calling on him for help for months now, and keeping his insights all to myself — until now.

It was a fluke when I found out that Friend Palmer’s scrapbooks are intact and available for perusal at the Burton Historical Collection. Imagine my surprise when, after waiting for some mundane item I’d requested to float up from the archives, the librarian handed me a creaky old album, full of clippings of the most miscellaneous order. The initials on the inside cover: F.P. And I knew at once.

The scrapbooks are fragile, the paper rippled from age, and they tend to leave little piles of disintegrating matter wherever they are set. This is a crying shame for preservation’s sake. But compared to Clarence Burton’s scrapbooks — which are archived on microfiche — and from a very selfish standpoint, these hard copies are a charm unparalleled.

I adore them. Along with clips of Palmer’s own historical articles in the Free Press and news of local interest, they include clips about Napoleon, the life of Abraham Lincoln, royal celebrities, recipes for longevity (onions: nature’s miracle!), cartoons about wives (oh, wives! always asking for fancy trunks and scarves and things!), homely parables about being nice to your wife and your family, poems, and portraits of comely Victorian ladies. 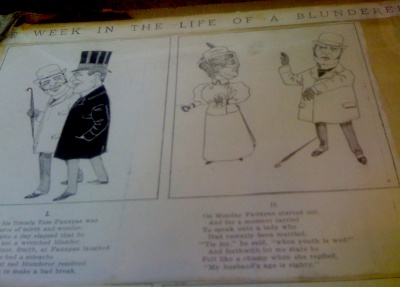 And perhaps the most delightful thing in the General’s scrapbooks are his own notes.

Remember Colonel David McKinstry, and his museum? Here’s what General Palmer wrote about it in Early Days:

The museum … contained many rare and curious objects, among which were three Egyptian mummies, a fine collection of wax figures, also a variety of beautiful and rare specimens of birds, beasts, minerals, shells, etc; with many interesting curiosities in nature and art. There were many splendid cosmoramic views, and in the evening phantasmagora and phantascopal illusions were exhibited. The museum was quite popular and a source of considerable revenue to the colonel.

Dramatic exhibitions of a light vaudeville character were given in the fourth story, and laughing gas was also administered to those who desired it. This giving of laughing gas was somewhat dangerous to the operator and to spectators as well. A partition extending from the floor to ceiling hemmed in the partaker of the gas from outsiders. Many funny incidents occurred connected with this pastime. While under its influence, the partaker usually acted out his peculiarities or proclivities, laughing boisterously, dancing, boxing with an imaginary foe, declaiming, etc. It was quite a feature and always attracted a large crowd.

I was doing some research about McKinstry and found an article in Palmer’s scrapbooks about the history of Detroit’s museums. And this made me laugh out loud: 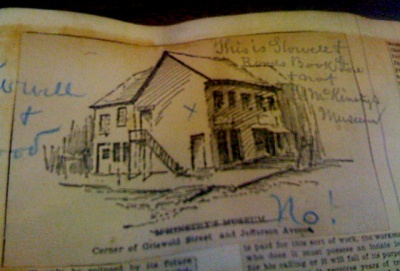 A picture captioned “McKinstry’s Museum” ran alongside the story. Palmer crossed it out with a blue “X”. “This is Stowell and Rood’s book store + Not McKinstry’s Museum!” he wrote on one side.

He crossed out the caption; below it, he just wrote: “No!”

Another illustration of a different museum ran with the story, apparently correctly identified, for Palmer wrote beneath it: “I have been there often,” and “Yes, this is so.”

First of all, laughing out loud in the library is the best. Secondly, I’m grateful that General Palmer corrected the record. Later that day, when I pulled the image file on McKinstry’s museum, it contained only a small clip of the image that ran with Palmer’s article. And I just thought in my head: NO!