This totally broke my heart: 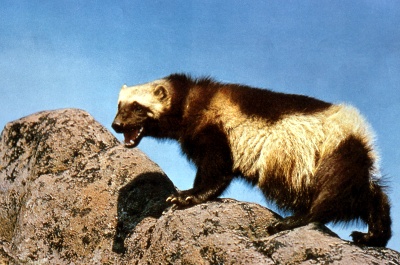 An article in the Detroit Free Press dated January 25, 1914 tells the sad tale of Annabellisle, believed to be the first wolverine in Michigan. Due to its reputation as “the wolverine state” (perhaps a slur invented by piqued Ohioans during the Toledo War), the Belle Isle Zoo thought it only proper that a wolverine should be on view. But the first one they tried to acquire died in transit from Siberia, and Annabellisle, on her arrival from Alaska, was in a bad state: she was listless, skinny, and wouldn’t eat — and wolverines eat everything!

I’m sure the situation would have been better had the “Office Naturalist” not been so openly contemptuous toward the animal. The Free Press reported that he called the wolverine “absolutely the lowest form of animal organism,” calling the creature “cunning, rapacious,” and preoccupied with robbing bait from animal traps. The skunk, the naturalist said, shone by comparison. He “declare[d] openly that it will be a good thing for the zoo if Annabellisle passes beyond.”

Annabellisle couldn’t even catch a break with her zoo companions.

“The other animals at the zoo distrust her and, it is said, won’t feel keenly if she dies,” the Free Press reported.

The Naturalist guessed that Annabellisle was refusing her food because she was upset with her corny name.

“Perhaps it is loneliness,” he surmised.