The Great Clock of Detroit

When I first found this description of Frederick Meier’s “Great Clock of Detroit” (Meier called it the “American National Astronomical Clock”) I thought:

“Oh, yes, that clock at the Historical Museum.” 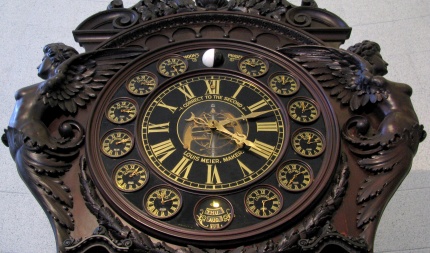 But oh, no, friends. This is a totally different machine. And what I wouldn’t give to see it in action.

At the top of the clock, a marble canopy. Atop the canopy, a gilded statue of Columbia. Beneath the canopy, the seated figure of George Washington.  Adorning the four corners of the clock, the phases of life, each of which marked a quarter-hour with a distinct bell: the infant, the youth, the middle-aged man, and the old man. In the center of the clock, the figure of a skeleton, which struck the hours with “a deep, sad, tone.” And then:

When Death strikes the hour, a music-box concealed within the clock begins to play; the figure of Washington rises slowly from his chair and extends the right hand, presenting the Declaration of Independence; the door on the left is opened by the servant, and all the Presidents from Washington to Hayes enter in procession, dressed each in the costume of his time. Passing before Washington, they raise their hands as they approach him, walk across the platform, and disappear through the opposite door, which is promptly closed by the second servant. Washington then resumes his chair, and all is again quiet, save the measured tick of the huge pendulum. 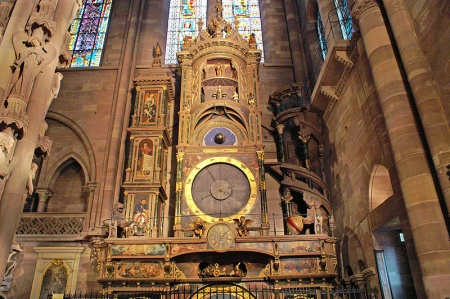 [The astronomical clock at the Strasbourg Cathedral, 1843. Source]

It told local time as well as time in major world cities from Paris to Peking, Cairo to Constantinople. It also indicated the time of the zodiac, the revolutions of the earth on its axis, the revolutions of the moon around the earth, the phases of the moon and the movement of the planets around the sun. Meier’s calculations were so precise, he claimed, that they would be accurate for 200 years.

It took Meier ten years to build his Great Clock, and when it was completed in 1879, it went on a U.S. tour. A year later, with profits from the tour eaten up by shipping costs and Meier beset by gambling debts, the wizard clock-maker sold his masterpiece to a New York collector.

The fate of the Great Clock of Detroit? Destroyed by fire — possibly a warehouse fire; possibly in the fire that destroyed Coney Island’s Steeplechase Park in 1907. Frederick Meier died in 1908.

And the clock at the Historical Museum? That’s Meier’s Wonderful Clock, built by Frederick’s son Louis to prove the family’s enduring mastery of clock-making, unveiled at the Michigan State Fair in 1906. It doesn’t operate for visitors anymore, but you can watch a video that shows the clock in action.

Who wants to rebuild the Great Clock of Detroit? Crowdfunding, anyone?