Wow, it’s nice outside, huh? That’s about all we can think about today. Bike rides this weekend? We think so.

Kickstarter of the week: Did you know that Eleanor Roosevelt broke ground on the Brewster-Douglass housing projects in 1935? We did not. But news of this project encouraged us to learn more. So we donated! Also, there are kittens in the trailer.

High nerd season: Preservation Wayne walking tours (Saturday mornings/Tuesday afternoons) are afoot (HAR HAR). Also: sesquicentennial fever! The Henry Ford’s summer blockbuster Civil War exhibit opens tomorrow. Here’s a behind-the-scenes look. I’m sure you’ve heard that the Emancipation Proclamation is coming to town, but did you realize that it will only be here for 24 hours — and the Museum will be open the entire time? I can’t be the only person that thought, “OH MY GOD HUGE PARTY FOLLOWED BY 3 A.M. EMANCIPATION PROCLAMATION VIEWING” when I learned that. 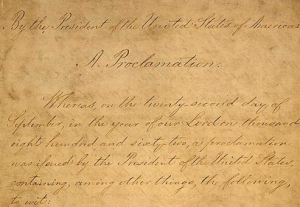 No bad prank goes unpunished: Does the rascally spirit of Jim Scott seek to destroy its very creation? Or is it just bad luck? During his Fountain’s restoration, most of the Pewabic tiles in its basin were trashed. Friends of Belle Isle is hosting a fundraiser on June 3 to help cover the costs of recreating the tiles to original specifications. We should all attend. Dressed as Jim Scott, in top hats, bow ties and carrying canes. (More on Jim Scott here and here.)

Epic: Sweet Juniper does it again. A witty post in epic poem form would have been enough. Throw in cute pictures of a kid in a Greek warrior costume AND delightfully fanciful cemetery photography and you have something pretty damn special.

Three cheers: Thanks to The Detroit News for helping the Detroit Public Library correct an accounting error that would have forced the closure of up to 10 branch libraries and hundreds of lay-offs. Journalism is still alive, well and relevant in Detroit! SO ARE BOOKS! It’s a feel-good story for the ages, as long as you don’t think about it too hard.

What else? I’m still catching up from all that time off AND I’m on a book deadline now, so I feel really out of the loop.