Ebenezer Hurd Rogers (1815 – 1885) was known in Detroit for two things: his “carping, dogmatic, fault-finding disposition” and an enormous and unrelenting appetite.

Oh, wait! Three things: his attitude, his appetite, and his bad teeth, which earned him the nickname “Squirrel-Tooth.” A.k.a., “Old Famine.”

Ebenezer came to Detroit from Vermont in 1838. Though well-regarded as a teacher and a scholar, he was notoriously unpleasant to be around. The joke around town? If Ebenezer Rogers came to the free happy hour lunch buffet at your saloon, he’d eat you clean out of your oyster pot. 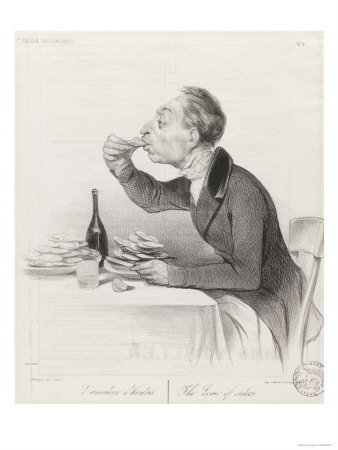 Writing in this book, Robert B. Ross described Ebenezer’s general temperament as “mean, sordid, avaricious and parsimonious.” On occasion, writes Ross, “He would relax and tell Rabelasian stories when he found an appreciative auditor, which was not often.”

An “uncleanly” man (in an age when, one must imagine, no one smelled particularly great), Rogers was reputed to be  “redolent of rank odors” to the degree that fellow tenants of his apartment building frequently complained to the landlord.

Ross called Ebenezer “a street connoisseur of female beauty,” but “being short-sighted, his inquisitive and searching glances not unfrequently caused great annoyance to fair pedestrians, whom he would often follow to their homes to learn where they lived.”

But this, by far, is my favorite story about Ebenezer Rogers:

For many years he was in the habit of calling at the houses of the late Gov. William Woodbridge and Dr. E. Hurd, but he was not a welcome guest, and the visits were gradually reduced in number until they became annual visits on New Year’s, on which occasions he always wore a ruffled shirt front. When fruit was ripe he came often to the Woodbridge mansion, where he paid particular attention to the fine old orchard. He was not content with plucking and eating the cherries, currants, gooseberries, apples and pears but, opening his umbrella, would drop them in until the receptacle would bulge out like a balloon.

Ebenezer was a good lawyer, but “his low tastes made him unpopular; his practice was almost wholly confined to unimportant cases, tried in justice courts.” Gradually, he stopped practicing law and became a dealer in delinquent tax titles.

On New Year’s Day, 1885, Ebenezer attended a banquet at Rice’s hotel, where he ate a huge quantity of (presumably free) food. The next day, he died of “congestion of the stomach” at 70 years old. A life-long bachelor, he left no heirs.

You can’t make this stuff up.