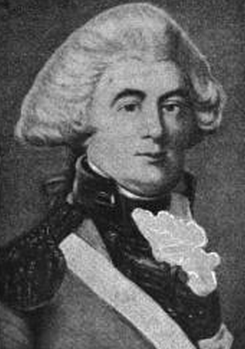 [From History of Detroit and Wayne County and Early Michigan]

Major Arent Schuyler DePeyster, a British officer from New York, became Commander of Fort Michilimackinac in 1774. His legacy there includes this famous silver bowl and a 10-foot tall carving in his image. In 1779, he transferred to Fort Detroit, where he served as Commander until 1783, ably managing Indian allies, figuring out what to do with his war captives, and defending the settlement from the threat of insurgent Kentuckians.

He also wrote poetry. In 1813, happily retired, DePeyster published Miscellanies, by an officer.

The French, my sons, are not your friends;
They only mean to serve their ends!
In this alliance lately made,
Their end is our tobacco trade.

Sometimes to lament his fallen comrades, like Major Bryce Maxwell of the King’s Regiment, who died in an attack on a Fort in Martinique:

Is Maxwell dead? — That cannot be, —
He still lives on the list of Fame;
In Holland, Denmark, Egypt, see;
How he immortalized his name.

If, since at Martinique he fell;
And there awhile entombed must lie,
There too his deeds Fame’s list shall swell;
While his pure soul acsends the sky.

DePeyster’s poem about drinking, dining and pony racing on the frozen Rouge River may be his most frequently cited literary contribution to local history. No wonder why; it paints a highly charming scene:

Our bodies wrapped up in a robe lined with sable,
A mask o’er our face, and fur cap on the head;
We drive out to dinner — where there is no table,
No chairs we can sit on, or stools in their stead …

… The goblet goes round, while sweet echo’s repeating,
The words which have passed through each fair lady’s lips;
Wild deer (with projected long ears) leave off eating;
And bears sit attentive, erect on their hips.

I like the animals wandering out from the woods to join the party.

But by far, my favorite selection from Miscellanies is the epitaph DePeyster wrote to his wife’s parrot, imagining that it bit him, and he kicked it, and it died. (That didn’t really happen, but you have to guess that DePeyster wished it could more than once.)

Ah! Who shall henceforth fire the grenadiers?
And who shall welcome in each friendly guest?
At this sad sight all bathe their eyes in tears,
And shun me (fell destroyer) as the pest.

Oh, also: the parrot, Poll, was a gift to the De Peysters from General Isaac Brock, the man who captured Fort Detroit (and died few battles later, at Queenstown) during the War of 1812; it could also drill a squad, “being master of a very good voice, and of every word of command, which he gave with proper emphasis.”

It also liked to cuddle with their dog, Dapper, “which the dog bore with patience, but did not much like.”

You can read Miscellanies in full at Archive.org. And I recommend you do.