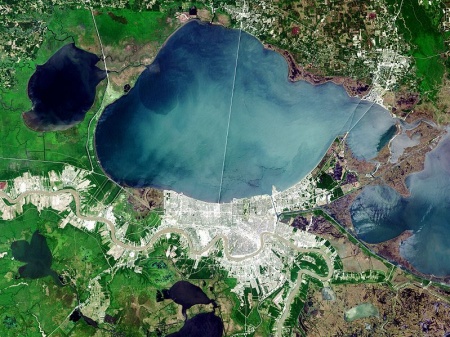 It’s obvious even before your plane lands.

We share some things. In this case, Detroit’s Fort and New Orleans’ Lake were named for the Comte du Pontchartrain, Minister of the French colonies in North America, perhaps to attract a few extra francs from the Comte’s purse.

We all know the story of Cadillac’s landing at Detroit, where he founded the city for France in 1701. Not all of us realize that after a ten-year term as commandant of his city on the straits, King Louis abruptly terminated Cadillac’s appointment and ordered him to proceed directly to Louisiana, where he would become Governor.

The King’s reasons for this hustle are  not clear, but it probably had something to do with Detroit’s mediocre economic performance, Cadillac’s habit of picking on the Jesuits, his endless disagreements with the colonial trading company, and/or grousing from locals, who didn’t always like Cadillac’s feudal style:

In some [land] conveyances, there was a condition that the vendee should join others in setting up a May pole before the house of the Commandant on the first of May in each year. Exemption from this condition could be purchased each year upon payment of three livres in money or skins.

-Clarence Monroe Burton, “The Building of Detroit,” from When Detroit Was Young

Cadillac did not proceed directly to Louisiana. In fact, after a brief stop in Quebec — where he submitted desperate (and ultimately, failed) claims to property in Detroit that stretched from Lake Erie to Lake Huron and west from the river for some 700 miles — he went back to France. When he returned to the colony in Louisiana, he brought a boatload of marriageable French girls for colonists to wed. (One report I flipped through at a bookstore in New Orleans suggested that the girls were “improperly supervised” once they arrived, and caused more problems than they solved.)

Cadillac hated Louisiana, and wrote volumes of correspondence to various ministers and bureaucrats in France airing his grievances. (Let’s be fair: he may have been a little disgruntled about losing all of his property in Detroit.) In one letter, he described the residents of the colony as “the refuse of Canada,” insisted that Louisiana was “not worth a straw” and even declared the entire continent “not worth having.” The colonists, he said, wanted to run away.

In another, he simply wrote: “Bad country; bad people.”

Louisiana didn’t like Cadillac very much, either, and in 1716, Cadillac was released from his post. Upon his return to France, Cadillac continued to bad-mouth Louisiana until he was thrown in the Bastille for a few months to cool down. He lived the rest of his days in mother France, where he apparently retired into obscurity.

Hard to imagine that the fiery Gascon settling down. Maybe his later adventures are just lost to the ages.

Oh, and fun fact: There’s a Michigan Historical Marker (not just any old historical marker!) at the house in St. Nicolas de la Grave, France, where Cadillac was born.

More on New Orleans and Detroit next week, we think.