The Spirit of Detroit

Five years ago today, on the first take-off-your-sweater-nice day in spring, in a college town on the stateline between Wisconsin and Illinois, I walked to a tattoo parlor, had this done, and then went out for a beer. 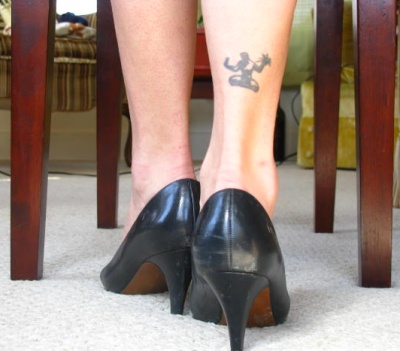 Because it was sunny and warm. Because spring fever does funny things to people.

What compelled me? I was a kid. The bad-ass mystique of Detroit still impressed my friends. And I suspected that I loved the city. Because of the train station. Because occasionally my cool friends from home would take me to someone’s “artist loft” for a scene-y CCS party, or smuggle me into some blues bar to see a cover band.

And because Detroit was where I’d come from, and where generations of both sides of my family had come to, and from, in their quests to improve their lives.

A mere hour before I had this heroic little man inked into my leg for the ages, I went to the library and did some research.

The sculptures of Marshall Fredericks, I learned, are some of Michigan’s most beloved works of public art. As a young teacher at Cranbrook, he won a national competition in 1936 to create the Levi L. Barbour Memorial Fountain on Belle Isle — the wheeling gazelle, his first public monument. 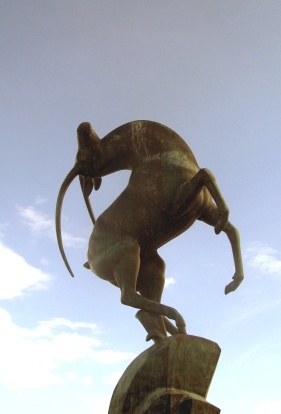 Fredericks worked in bronze on a gargantuan scale. Look at this room full of humongous treasures. His crucifix at Indian River was at the time, and may still be, the largest crucifix in the world.

He worked with huge ideas and emotions, too. His sculptures are lofty. Like, here’s Man and the Expanding Universe, 1964: 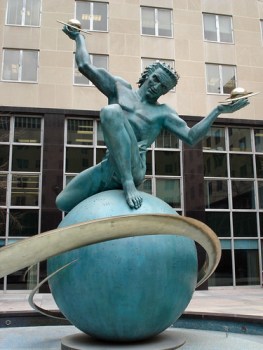 The Cleveland War Memorial Fountain (the “Fountain of Eternal Life”), 1964: 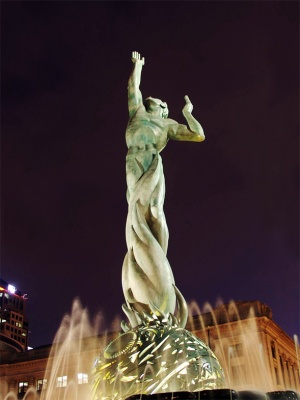 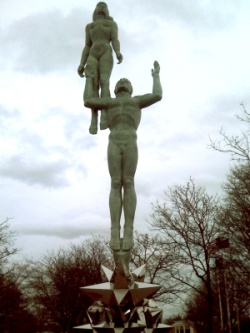 (He had a way with animals, too, that I really appreciate: 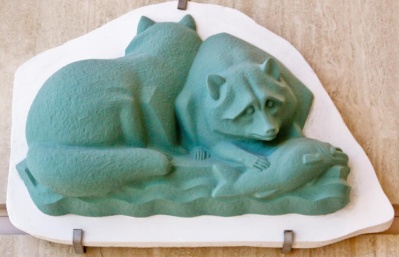 LOOK AT THOSE BUDDIES!)

Over and over again, the triumphant theme of the human spirit, in harmony with nature, ascending from forces of violence, evil, war and suffering, to an eternity on high. Ad astra per aspera: to the stars, through adversity. 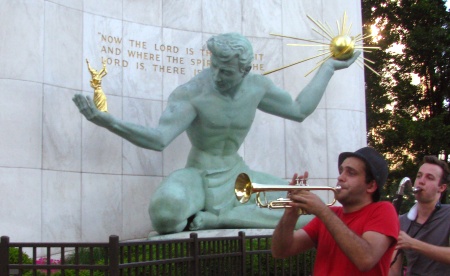 (Of COURSE, the only picture I have of him in my personal collection includes a marching band.)

He’s a hunk, that one. By one account, the largest hunk of bronze cast since the Renaissance. A dream of perfected humanity, with wavy hair and washboard abs. In one hand, he holds a gilded orb, representing God, casting rays of light on the world.

Like a lot of Marshall Fredericks’ work, there’s a touch of the Disney — a wholly uncynical dream of man’s potential, cartoonishly rendered. But I will always love this sculpture for this tiny, gleaming reason: 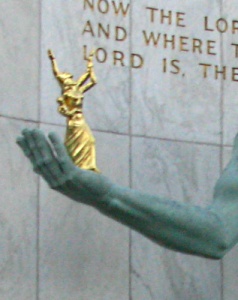 This is not a bunch of birds eating out of a man’s hand. It’s a family.

This weekend, my fella and I will start a tiny new family, in front of our much larger family, and our family of friends and loved ones, in the magnificent, magnanimous city of Detroit, where our families have lived for years. That’s why we included a silhouette of the Spirit on our invitations (designed by the amazing husband-wife duo of Perfect Laughter). (I’ll include a picture, but I can’t find anything right now, because, GOOD LORD, WE’RE GETTING MARRIED IN THREE DAYS, and our place is a shambles.)

After the wedding, we’re honeymooning in New Orleans. When we return, I will settle in to write my BOOK (!!!!) of quirky tales from Detroit’s pre-automotive past.

So I guess this is my long-winded way of saying farewell, for a while. Posts will continue in May. See you when I’m MARRIED! Meanwhile, be good to your family, be good to Detroit, and enjoy the spring.