It’s not the likeliest place for a hallowed memorial to a decorated officer of the Revolutionary War. But here he lies, along growly old Jos. Campau, across the street from an L.A. Insurance. 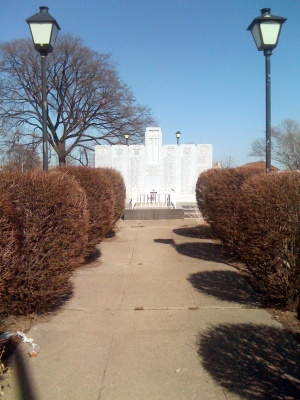 There’s a certain satisfaction to swinging open one of the iron gates that picket the tomb of Colonel Jean-Francois Hamtramck. You wonder, How many people come through here in a day? There are people shouting in the nearby street, in English (Is this gonna be a fight?) and in Arabic, and between the car horns and the cold sunshine, it all feels a little feral.

Let’s all be reminded that March is the messiest month. Bare bushes are not always decked with shreds of plastic bags; the solemn approach to the grave of a patriot is not always littered with half-empty fruit cocktail cups and pizza boxes.

But so it is, this time of year. 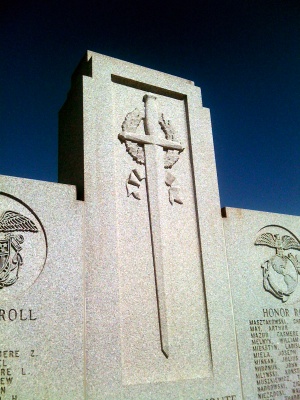 Colonel Jean-Francois Hamtramck, born in Quebec in 1756. Before he was 20, he’d joined American forces fighting for independence from the British. He was in active duty for the rest of his life. Hamtramck played a major role in securing the Northwest Territory during the Indian Wars of the early 1790s. George Washington personally commended him for his bravery more than once. In 1796, with General “Mad” Anthony Wayne ill and en route to Pennsylvania, Colonel Hamtramck raised the American flag over Fort Detroit for the first time.

You can read a selection of his letters to Mad Anthony Wayne, where he discusses his diplomacy with local tribes, apologizes for giving away his winter rations to hungry Indians, and bemoans his lack of certain martial authorities:

Two of our men deserted on the 14th inst. I sent my interpreter and an Indian after them. They brought them back last night. I wish they had brought their scalps, for I know not what to do with them. Could I have the power, at all times, to call a general court martial for the trial of deserters it would save a great deal of time.

From A History of Detroit for Young People:

The Colonel was undersized and rather plain. He always rode at the head of his men on the largest horse possible.

From his gravestone, with what has to be the longest memorial inscription in town:

… True Patriotism,
And a zealous Attachment to rational Liberty,
Joined to a laudable ambition,
led him into Military Service at an early period of his life.
He was a Soldier even before he was a man …

… The United States in him have lost
a Valuable Officer & a Good Citizen,
And Society an Useful & Pleasant member;
to his Family the Loss is incalculable;
And his Friends will never Forget
the memory of Hamtramck.

Like our friend Stevens T. Mason, Col. Hamtramck’s remains have been removed multiple times. After his death in 1803 (just 46 years old), Hamtramck was buried in the graveyard at St. Anne’s, then removed to Mt. Elliott in 1869. In the 1960s, he was reinterred at Veteran’s Memorial Park in Hamtramck, the burrough named for him. 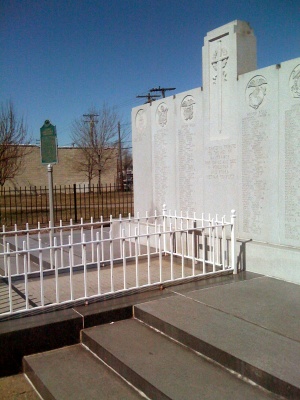 This book is in the mail for me, and I can’t wait to learn more. Until then, the next time you’re in Hamtramck, raise a glass, or pay a visit.