We’re on our way out of town to celebrate the wedding of two of our closest friends. That means we’ll miss this: 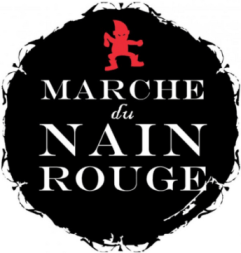 And this, for those of you of a more relativist perspective on the bogeyman.

But you! You. Should definitely go.

You can learn more about the Nain Rouge in Legends of Le Detroit:

Suddenly across their path, trotting along the beach, advanced the uncouth figure of a dwarf, very red in the face, with a bright glistening eye; instead of burning it froze, instead of possessing depth emitted a cold gleam like the reflection from a polished surface, bewildering and dazzling all who came within its focus. A grinning mouth displaying sharp pointed teeth completed this strange face.

“It is the Nain Rouge,” whispered Cadillac’s wife. Before she had time to say more, Cadillac’s ill nature had vented itself in striking the object with a cane he held in his hand, saying:

A fiendish mocking laugh pierced the still night air as the monster vanished.

“You have offended him,” said Madame. “Your impetuosity will bring you and yours to ruin.”

Not long afterward, Cadillac got in trouble with the crown and King Louis had him removed. Since then, the tipsy locals say, the Nain Rouge has been glimpsed at the battle of Bloody Run, the fire of 1805, Hull’s surrender, and all manner of other local misfortunes.

Basically, this guy is the worst. Drink a few for us in our absence and get him out of here!

Or defend his honor. It takes all kinds, you know. And Antoine Cadillac was kind of a creep, anyway.