Once upon a time, a girl decided to get married.

For a long time, she’d pictured a beach. 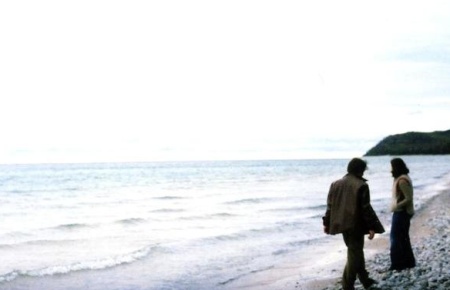 The man she decided to marry? Hated the beach. A barn sounded nice too, but the thing about barns is? It turns out they are kind of impractical.

When her parents first moved to a house with a feral summer garden full of wobbly hydrangeas, rangy rosebushes, dinosaur-sized ferns and high pines, she thought the backyard would be a good place for a wedding. 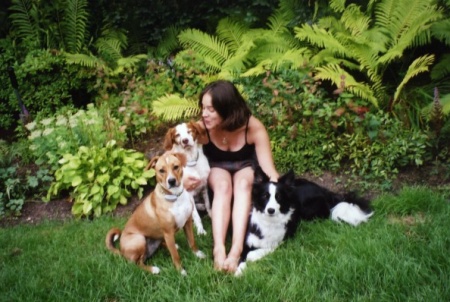 But by the time she was ready to settle down, her parents had a few dogs, and the backyard was full of poop.

Besides, this girl started to feel like she wanted to celebrate something bigger than her love for her partner. Call it heritage, or community, or shared history, or something a little more fantastical/delusional than that. Despite some early talk about running off to Milwaukee to tie the knot at the mansion of the Captain Frederick Pabst, she and her fella decided to honor their family (all in the same general geographical vicinity!) and their past and their passions and get married in Detroit.

Which leads us to the Casino. 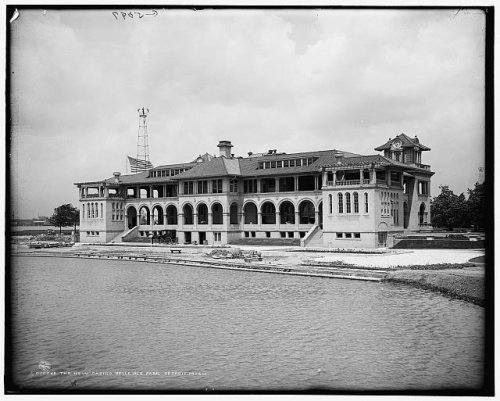 Perhaps you, like me, had no idea what the Belle Isle Casino is or ever was. Maybe, like me, you consider yourself pretty low-key, and it’s possible that you assume, as I did, that it wouldn’t be too hard to find a large but affordable (and at least moderately attractive, and preferably historic) space in the city that allows you to bring in your own caterer.

But oh. It’s a challenge. And maybe, you start to think, you’re not as easy-going as all that, if all of these terms are non-negotiable.

And then, at the St. Patrick’s Day parade, someone might whisper to you: “Try the Casino. On Belle Isle.”

What is this strange and mysterious place?

We must stop at the casino long enough to get a lemonade, or a cup of coffee and a sandwich. Let us go up into the balcony of the casino, where we can get a bird’s eye view of the river and island. We can see, as we look from the west balcony, the beautiful lawn, the artistically arranged flower beds, and the artificial pond surrounded by rocks and shrubbery and our eye can trace the winding river on its path to Lake Erie.

– From Onward: The Journal of Universalist Young People, 1897 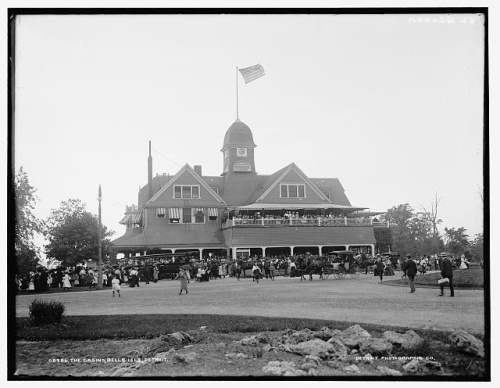 This was the first Casino on Belle Isle. Frederick Law Olmsted Jr. hated it!

The principal immediate question with Belle Isle Park is that of a better casino. The present building I understand to be somewhat inadequate in size and defective in its accommodations, and it is plainly not a very dignified or agreeable work of architecture.

Frederick Law Olmsted Sr., of course, planned most of Belle Isle as we know it today, with an eye toward maintaining most of the island’s raw, natural beauty and providing simply and elegantly for some common public spaces, thoroughfares, and better drainage throughout the island. Although he (surprise) struggled to get city officials to commit enough cash to his plans and eventually resigned from the project, the park unfurled more or less according to his vision.

One element of his plan that the city DID scrap (much to Mr. Olmsted’s contention) was a 600 foot-long sheltered promenade connecting to the ferry dock and spanning the length of the western shore, where people could hunker down in the rain, cool down from the high heat in summer, or just take a fashionable stroll.

In his 1905 report, Olmsted Jr. proposed that a new casino building incorporate some of the features of his father’s never-built promenade: a long, narrow design, open to the breeze, stretched out along the shore, commanding a view of the river. The building could include lunch counters, beverage service and a formal dining room, as long as the service activities were concentrated in the second floor, the kitchen and staff out of view, so that the public could enjoy the natural beauty of the island from Detroit’s stately front porch.

This is a good time to note that there has never been gambling at the Belle Isle Casino; the word means something like “cute little house,” in Italian. Appropriate, then, that the new Casino, designed with Olmsted’s recommendations in mind, would look so — Italianate. 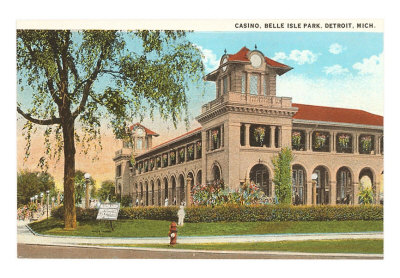 Charming! It was built in 1907 and not by Albert Kahn. Everyone everywhere reports this for some reason, but the Casino is the work of less-famous architects Van Leyen & Schilling (also responsible for this building, this building, and this other building.)

Since then, it’s been a site of public entertainment, gathering and dining. My dad fondly remembers the concession stand where he bought snacks and sodas as a teenager in the early ’60s. Once I saw a photograph of a guy playing pool and some old people dancing in the upstairs lounge. Lunches for tour groups. An HQ for park events. Family reunions, quinciñeras, and weddings, like mine. 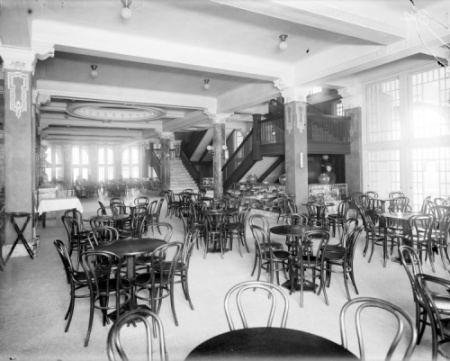 And I think it’s going to be pretty great. It doesn’t have the most dramatic history, or even the most breathtaking vista, now that the front approach is blanketed in spidery pavement laid for the long-gone Grand Prix. (On the upside: parking is ample.) And, like my parents back lawn, Belle Isle tends to be covered in poop (from the geese) in the spring time.

But  it’s on Belle Isle! And that’s an island that’s also a park. And from the Casino’s wrap-around veranda, you can see Canada, Jim Scott’s spiteful fountain, the spires of Detroit industry and the sparkling span of the Ambassador Bridge. And the river, so it’s almost like a beach.